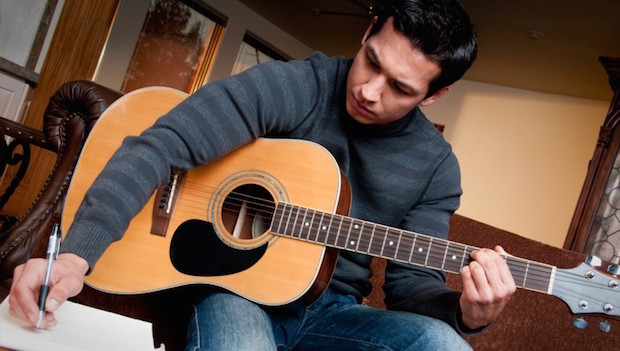 I remember the first time I tried writing a song – it was a mess. I had no idea where to start, no idea how to come up with melodies (let alone match them with lyrics), and no idea what to write about. Songwriting can be an extremely daunting mountain to tackle if you've never written a one before, but like anything, all it takes is some guidance, effort, and practice. It's a muscle you have to exercise, and if this is your first time attempting to write a song, fear not. I'll shed some light on some approaches to get you started in a way that will work best for you.

There are three main components to a song, and thus, three main approaches to writing one: lyrics, melody, and harmony (meaning the chord progression). It's likely that you'll identify with one or two of these strongly. For example, if you're already a creative writer and do other types of writing such as poems or narratives, you'll gravitate towards the lyrical side of writing. If you're a singer or you play a melodic instrument such as the violin, you'll likely have an advantage in melodies. And if you're a guitar player or a piano player, you'll find yourself having a tendency to come up with a chord progression before you do anything else. There's no set way of writing a song, and more often than not, songwriters will implement two of these approaches at a time – sometimes even all three at once!

But if this is your first time writing, I would suggest honing in on one element to keep it simple. Here are some easy starting points for each of these three approaches so you can get the ball rolling and start writing.

Take an existing song and rewrite new words to it. This can be a fun way to start because it's almost like a puzzle. You'll have to come up with words that match the melody and rhythm of the song, and it's not as easy as it seems. The great thing about approaching it this way is that you'll begin to learn about the how the natural contour of the language – meaning the stressed and non-stressed syllables as well as the rise of fall of the words – works together with the shape of the melody and rhythm.

Beginning songwriters (and even some seasoned songwriters) aren't always aware of the contour of the English language. I'll often speak the sentence before I put it to a melody to see where my voice rises and falls and which words I stress and don't stress. When the contour of the lyrics and the melody flow together, not only will your song sound natural and smooth, but it'll add power and punch. For example, if your phrase is, "I want you to know that I miss you," you'll probably want your high notes to be on the words "know" and "miss" instead of "to" and "that."

After you've tried this exercise, scrap the preexisting melody and write your own melody to it.

This is the opposite of the lyric approach: take an existing song, scrap the melody, and write a new melody to the words while making sure your melody is matching the rise and fall of the lyrics. Or, if you're more adventurous, come up with a chord progression first, then write a melody on top of it without words yet. This will keep you focused on creating a melody that can stand on its own even without lyrics, which is extremely important.

The most essential thing to keep in mind when you're approaching a song with the melody is phrasing. There has to be movement. Just like when you're talking, your words progress and move, and your voice will have inflections based on what you’re saying. Music is the same way, as it's very similar to languages. You have to keep phrasing in mind, and a great way to do this is making sure that each musical phrase has a climax, or high note. Melodies can tend to wander around aimlessly if they aren't heading toward anything. In the verses, the high point will generally be lower than in the choruses, so keep that in mind as well.

This is often the most common approach among songwriters. The harmony, or the chord progression, is essentially what we would call the "music." It's the backbone for the melody and the feel or emotion behind the song.

For this approach, start by analyzing the chord progressions to some of your favorite songs. (This can be found easily if you google the song title and the chords.) Take one of the songs you learned the chords to and write your own melody and lyrics on top of them. Having a harmonic progression laid out is a great starting point because it directs where your melody will be going and what notes will work on top of it. After a while of approaching it this way, you'll begin to notice that certain chords "feel" a certain way. This is cool because the more you understand how the chords make you feel, the more effectively you can channel the type of emotion you want to convey by choosing chords that will progress in the way that you desire.

Whichever approach you gravitate towards, make it your starting point. The journey to becoming a great songwriter comes through writing and scrapping song after song, but it's a rewarding craft that can really expand your toolkit as a musician. After a while, you won't have to use these simple methods as starting points. You'll get into a groove of your own for whatever works best for you, and that's when the fun really begins!