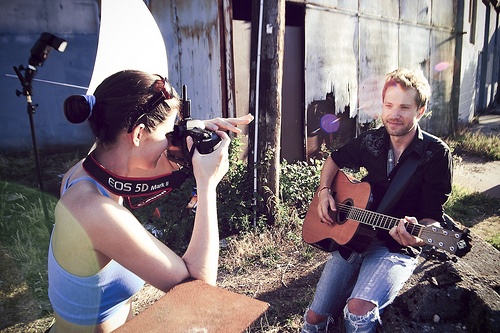 This article originally appeared on The Music 3.0 Blog.

A good picture is such an important element, yet it's frequently given such little thought by the artist that it's almost a waste of time and money. It's for that reason that I thought these five tips to photo shoots might help.

1. Know what you need beforehand

Any real photo shoot requires some thought beforehand. Do you need straight promo shots or shots for an album cover? Do you want to be posed or in action onstage? Do you just need headshots? Don't just ask a photographer to come to a gig and pose in front of a brick wall outside the club (please, don't)! You'll look like every other artist or band in the world. The idea is to stand out somehow.

2. Choose a pro, but get the right one

We all have the capability to take good photos from our phones these days, but that doesn't mean that it's a good idea. After all, just because someone owns a guitar, that doesn't mean he or she is qualified to play with your band, right? Same principle applies here. You need a pro, but you need the right pro as well. Find someone who has experience doing band shots. Someone who's a great wedding or commercial photographer might not get you what you want and need. If you want live shots, then get someone who knows how to do that, since it's a completely different kettle of fish from a controlled environment of a studio shoot. Make sure that you check out the photographer's portfolio before you do any hiring.

3. Come to the shoot prepared

Chances are that you're going to be shooting in the photographer's studio, so here's what to bring:

Since you're already with the photographer, get a mix of shots, from headshots to body to full. You might also want both individual shots, if you're a band, as well as group shots. Don't be afraid to use different shot setups either, since you might hit upon something that's unique or fits you better than a traditional setup. Digital shots are cheap these days, so you might as well get as many as you can.

5. Use the photographer's taste

If the photographer is any good, he or she will have lots of creative ideas during the shoot. Sometimes something that seems out there at the time will end up looking fantastic in the end, so just go with it. Also, you'll have hundreds of shots to choose from when you're finished that can easily make your head spin if you're not used to looking at pictures of yourself. Ask the photographer to provide some suggestions of what he or she thinks are the best ones to help you cut through some of the work at looking at them all if you don't have the time or inclination.

Make no mistake about it – photo shoots are work, and they can easily take all day in the hands of an experienced photographer. Relax and enjoy the ride; you're getting your picture taken. That moment in time can only happen once, and it's being frozen forever.

Producer/engineer Bobby Owsinski is one of the best selling authors in the music industry with 23 books that are now staples in audio recording, music, and music business programs in colleges around the world, including The Mixing Engineer’s Handbook, Social Media Promotion for Musicians, Music 4.0: A Survival Guide for Making Music in the Internet Age, and more. He’s also a contributor to Forbes writing on the new music business, and he’s appeared on CNN and ABC News as a music branding and audio expert. Visit Bobby's music production blog, Music 3.0 music industry blog, Forbes blog, podcast, and website.