Expectations vs. Reality: 12 Lessons From SXSW Veterans for First-Time Performers 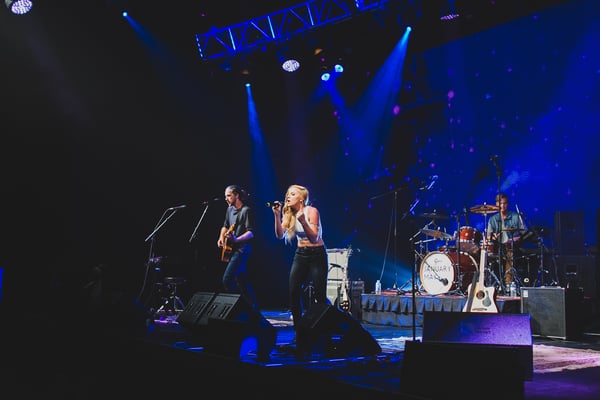 January May (image courtesy of the band)

Prepare all you want, but there's no avoiding an involuntary jaw drop upon arriving at SXSW for the first time. The mass of people, music blaring from all angles, the promotional pushing of trial-size beverages and branded tchotchke on every corner – it's all very overwhelming. And that's just the likely experience of an attendee. Performers have even more to contend with, from competing for listeners to figuring out how the hell to load in amid the chaos.

We asked bands who've been through it firsthand about their expectations, the reality of SXSW, and what they wish they'd known the first time around. The festival, although immensely awesome, can also be an unpredictable and unapologetic beast. These 12 tips will help you maximize its possilities instead of succumbing to its pitfalls.

It's true that SXSW can be like jet fuel for a band's career, but the supremely fortunate are few and far between. For the sake of avoiding disappointment, let's be honest: the likelihood that you'll ink a deal with a label, much less a major, is very slim. (Much like your chances as an independent artist year-round.)

Ariel Monet Haugtvedt, drummer for Tempe synth-hop-rock act Snailmate, says she was humbled by her first go 'round in Austin. She says she realized she was "just another drummer in the sea of musicians."

"I think a lot of people go expecting to 'blow up,' and that is not the case at all," she adds. "It is a great experience for exposure and networking, but not an easy way out. Just getting to SXSW is hard work, and the whole week is hard work, too. It's an experience like no other!"

2. Be ready to fight for listeners

In the battle for the ears of festivalgoers and industry folk, free stuff is a reliably good weapon. Kg Lillian, vocalist for indie-pop trio January May of Union, MO, regrets not having merch on hand to give away during the band's last SXSW trip.

"With such an overload of new music and fresh bands, it's hard to keep the attention of people passing through venue after venue," she says. "We wish we would've had free items to offer on the merch table, drawing people in and allowing our name to be remembered. If there was ever a time to need something special, this is it. Every artist in the city is doing their best to stand out, even on corners between shows. It's a battle of most memorable with the best spectators. Austin is populated with the most open, honest, and curious audiences – be good to them."

Our attention spans have been downgraded to below-goldfish status, so engaging an audience at SXSW that's already prone to turnover is more difficult now than ever before. Bronx rapper Uncle TreY realized this right away.

"Being granted the privilege to perform at a SXSW event doesn’t automatically make you a star. I was a little nervous before I went onstage, but one thing to remember if you’re still trying to establish a steady fanbase is that when you go up there, people are looking for a reason to like you. During my performance, I made sure to engage the crowd," he says. "I taught them the words to hooks, and even shared a funny story of how I came up with the concept of a song I wrote about a stripper. They loved it, and after my performance, I received praises from many people who wanted to be directed to means of getting my music."

Another aid in maintaining a crowd: a crew of buds. If you've got friends at the festival, make sure they're at your show. (That sounds like a given, but given how hectic SXSW is, you should probably stress its importance.)

"It’s also useful to have friends in the crowd who know your lyrics," he says. "It boosts your confidence to be cheered on and is another opportunity for the rest of the audience to follow suit."

Do unofficial showcases actually outnumber the official ones? Probably. They're well attended, too – the cost of a badge doesn't fit everyone's budget. There's plenty of music fans who stick to only free, open-to-the-public events, and happily – because they're typically as great as (or better than) the rest.

Kg Lillian recalls, "We expected it to be difficult to score a gig during SXSW, with doubt causing us to procrastinate in applying to play opportunities. In reality, there are plenty to apply to that will accept bands that are new to the scene. It was that we underestimated the size of SXSW, shrinking it to only include the official events, that we were in shock when we saw that SXSW is practically the entire city of Austin. There is hardly a place of business without music flowing from it's doorway."

Jumping on an existing bill days before the festival is an unlikely scenario. It's simply too busy for that. The organizers have spent months upon months planning, so, save for a cancellation, they probably won't have room for any additions.

Laura and Greg, a '60s-leaning indie-pop duo from Brooklyn, agree: you have to nail down plans well ahead of the fest. "Don't wait until you've been officially accepted to play SXSW," they stress. "If you wait and you're not accepted, it'll be too late to book any unofficial shows."

6. Give busking a try

The streets are flooded with people, aka your potential audience. What better environment is there for street performers than during SXSW? Ariel of Snailmate recommends it.

"Busk if you can; it's not a waste of time," she says. "If you have free time and you can busk, it is really worth it to be seen by more people.... Leave stickers/download cards out for people to grab and, of course, a tip jar."

[The Best Places to Busk in Austin, Texas]

Go ahead and downsize your equipment as best you can.

"The chaos is addicting, but poses as a challenge when you're rolling a Korg down Sixth Street," says Kg Lillian. "While it's always nice to keep equipment as compact as possible, it's even more pertinent on the streets between SXSW venues. Parking and loading lanes are often blocks away from the stage your set is about to begin in, and you'll have to fight mobs of people to get through. Half of those mobs are other musicians, and they get it. Be fierce and vigilant when grabbing your space in a loading lane; there's no patience when it's shared between an entire block."

8. Streamline your setup with a tech rider

"If you don't already have a tech rider made, do it to it," Kg Lillian emphasizes. "You're probably familiar with short soundchecks if you've played any gig with multiple bands, but SXSW is days of that. The sound guys know their system, their venue, and that you'll be in and out. Help them – and yourself – by bringing them a one sheet of what to expect for each member: DIs, mics, instruments, monitors. Not only will it move things along, but it's often appreciated enough to encourage more precision from the sound tech who might be expecting inexperienced performers."

9. Give away merch and music, but don't overdo it

Before performing at SXSW, Uncle TreY ordered 150 copies of his latest mixtape. But the order was delayed, so he didn't get the shipment until two weeks after Austin – and it turned out to be a "blessing," he says.

"When I arrived to Sixth Street, [I] saw it littered with the mixtapes and dreams who had the same idea as I [did]. Word of advice: if you do plan on handing out hard copies to anyone, make sure they are people that you know are interested in listening to your work. It hurt seeing CDs, which I’m sure artists spent their hard-earned cash on, stepped on and disregarded on the pavement. Business cards might be a cheaper and better solution," he says.

If your finances are tight (as they are for most independent bands and artists), giving away paper cards or flyers with download codes is a far better option than physical copies.

10. Connect with other artists

Don't limit your networking to just people within the industry. Building relationships with other bands and artists is crucial in the independent music world, and working together and uplifting each other is especially paramount for newer acts.

"I wish I had reached out to the artists that I enjoyed watching after their showcases, but I plan on doing so this year, as well as the people covering the shows," says Uncle TreY. "Everyone out there is looking for someone, whether it be to work with on music, to help promote and take their career to the next level, or even if they’re just looking for new artists to listen to. It’s good nature to show love to a fellow musician whose work you genuinely enjoy, because as an artist, you should know how good it feels to receive it. So take full advantage of this trip! It might be the key to your success story."

Laura and Greg advise: "You're gonna get handed free drink tokens everywhere; pace yourself so you can kill it at your shows."

They're absolutely right. The festival can be exhausting even for attendees, so musicians with several shows lined up should be especially careful not to venture too far into party zone.

The festival is a chance to reach new fans as well as network, sure, but don't forget how awesome it can also be as a music fan. If you've got time, check out other bands and events when you can. As Laura and Greg point out, it's important to RSVP to a lot of these events. Mapping out a schedule beforehand will help you fit in some fun.

Are you making your way to Austin this March? Share your pics and videos with us on social media using #RoadToAustin!