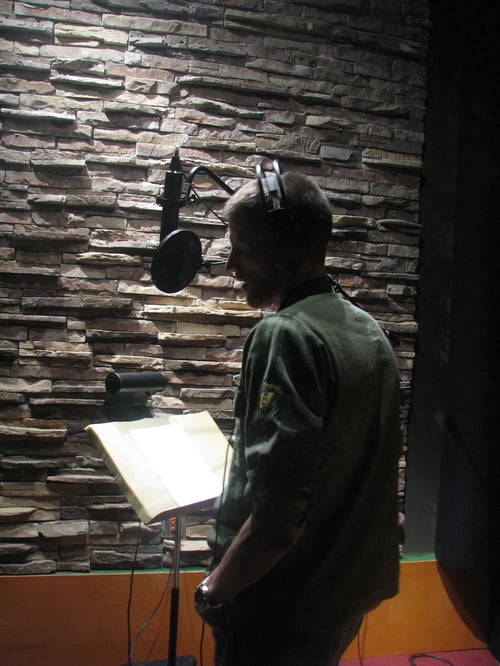 The science of acoustics is a serious academic study. It’s multidisciplinary and has implications across disciplines. People get doctorates in this stuff. Luckily for us, we don’t need to know how sonic vibrations effect nuclear centrifuges or use sonar to locate skulking nuclear submarines. We just want to make music sound good. A little understanding of the science helps a lot.

Here’s an image that will change your perspective on sound. As explained by the University of Indiana’s acoustical program, we live in an ocean of air. Crawling around on the surface of the earth, we’re at the very bottom of that ocean, and the miles of air above us create very high air pressure. Sound waves are simply fluctuations in that air pressure, and our ears are attenuated to detect them. In fact, our ears are so perfectly adapted to the job that we can detect fluctuations of less than one billionth of standard air pressure!

Not so you would notice. Sounds are louder in denser air, but keep in mind that Earth’s atmosphere is about 300 miles deep, so a studio in Denver and a studio in Death Valley only differ in pressure by a percentage point or two at most. There’s no need to relocate your studio for ideal sound.

What about weather and humidity?

Studios should stay between 35 and 50 percent humidity, but that’s for the safety of instruments and to prevent mold growth, not for acoustics. Again, humidity shouldn’t affect the sound waves in the room enough to notice, unless it’s actually raining in the studio.

Is there an ideal size or shape for a studio?

This is a complex question and one that’s likely to be somewhat moot because you’re probably not in a position to build a room from scratch. However, there are a few useful guidelines.

To squelch obnoxious symmetrical echoes, you should avoid rooms that have the same number in two dimensions. Perfectly square rooms are problematic, and cube-shaped rooms even worse. Luckily, ceilings in residential buildings tend to be around eight feet high, but longer in width and length, so you should be able to use a room that’s a rectangle or an irregular shape.

As for overall size, larger rooms are more forgiving, because you can move mics and sound sources around to find sweet spots. This is much more difficult in tiny rooms.

[How to Build an Incredibly Effective Home Studio for Under $800]

What about my control room?

Well, that’s where your square room comes in handy. Control rooms can be small and uniform, since the only sound source you have to worry about is your monitor speakers. In the control room, you want to have predictability and accuracy, and create a large sweet spot where things always sound the same. This is different from the studio itself, the performance room, in which multiple sound sources may be making waves at different spots within the room, sometimes all at once.

What if I mix with headphones, and don't use the control room's acoustics at all?

Headphones are all sweet spot. Not having the room as a reference makes engineers tend to think their mixes sound better than they are. With real sound waves bouncing around a real room, problems will be evident and will be quickly fixed. Headphone mixing is more forgiving and allows problems to slip through.

However, if you prefer headphone mixing or don’t have the option of using monitors, make sure you keep the volume reasonable so you don’t damage your hearing. Also, mix at two different volumes, regular and quiet, as many engineers do when mixing with speakers. If you can still hear everything in the mix clearly at low volume, you have a balanced mix.

Speaking of ear damage, how loud does a sound have to be to hurt my ears?

Think of the sound of a blow dryer next to your head. That’s the threshold of pain and ear damage right there. Nobody wears earplugs when using one of those things, although many people do when using a gas lawnmower, which is just as loud. Both those sources emit sound at a sound pressure level of 80 to 90 decibels, and that’s loud enough to damage your hearing. Human beings can shout at more than 120 decibels. Amplifiers and drums can reach that dangerous threshold, too, as can powered headphones, MP3 players, and such. Human conversation happens at around 60 decibels, which is a good range at which to mix. If you have to shout to be heard over your mix, turn it down.

What kinds of surfaces should I use in my studio for best acoustics?

Short answer: a mix. You’ve been in rooms that were all tile, or all carpet. Neither sounds great. Harder surfaces reflect nearly all the sound that strikes them, while softer ones absorb some of the waves. A mix of all kinds will create an acoustically rich environment that stops annoying slapback effects while keeping high frequencies.

For a reasonable starting point, try a carpeted room with something softer covering one wall. And start with a room with few windows. Glass reflects nearly 100 percent of the sound that strikes it, resulting in harsh slapback. If more than 10 percent of the room’s wall area is glass, you’ll need to figure out a way to cover that window with something thicker than a curtain to prevent that effect and help maximize the sound of the room.