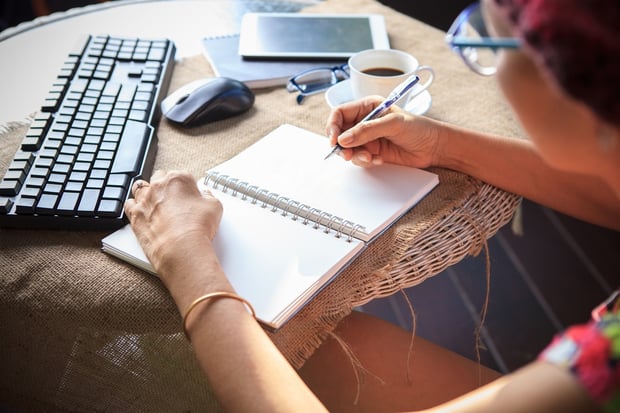 Be honest: have your lyrics ever found you down on your knees and begging please, or noting that when things change, they also rearrange? Has anything in one of your songs ever cut like a knife?

If you’re 16 and in your first band, you can be forgiven for coming up with the same metaphors and phrases that have occurred to thousands before you, but if you want to be a real lyricist, you should be aware of these overused lyrical concepts. It’s the only way to avoid them!

This tired simile, usually applied to a woman who’s not interested (or no longer interested) in the male songwriter, might be the number-one most trite phrase in music.

Try this instead: You can change the subject and the substance of this silly simile. Roger Waters flipped this one on its head all the way back in 1977 on “One of My Turns” when he sang that he felt “cold as a razor blade.” Better still, he was talking about depression and self-harm, not lost love.

This is not only a common metaphor for love, it’s a stupid one. Love makes one feel lots of things, but it’s never once made me feel as though I was cut by a knife. Stabbed, perhaps, but not sliced.

Try this instead: If one must use a painful metaphor for love, consider some other sources of pain and/or death (probably skipping drowning – that one’s overused, too): choking, electrocution, burning, gunshots, blunt-force trauma, road rash, or some sort of allergic reaction. All of these have been used, and some of them used a lot, but most songwriters go for the knife.

Usually rhymed with “please,” this bluesy couplet retreads the same theme of lost love, and more specifically an undignified plea for affection that once was freely given.

Try this instead: Throw the whole phrase out, and find another way to express your feeling. Warren Zevon, an encyclopedia of interesting lyrics, dodged all cliché when addressing this concept on “Accidentally, Like a Martyr,” singing, “Never thought I’d have to pay so dearly / for what was already mine.”

Surely there are other, more colorful ways to address the demeaning act of begging a lover to stay… like mentioning whatever you did to piss him or her off in the first place.

4. When everything happens "tonight"

Is there a word or syllable missing in your lyric? Just add the word “tonight.” This word haunts the end of millions of phrases, more common than a comma or a period. It’s the inevitable word that replaces an actual idea the lyricist might have.

Try this instead: The worst thing about this one is the total lack of any sense of time in most lyrics that feature it. It’s always “tonight,” a night that is going on now and will never end… and it would be more effective in future tense.

For example, “You’re my baby tonight” (more on "baby" later) is a lot less interesting than whatever is going to happen later, creating a sense of tension. “I’m crawling out my window tonight,” or “Meet me at the railroad tracks tonight” are examples.

5. "Things aren't always what they seem"

Well, no, they’re not, but this trite vaguery doesn’t actually mean anything, like when Polonius cried, “To thine own self be true” in Shakespeare's Hamlet. What the Bard intended as the babble of a fool has become universally cited as profound advice. For some reason, this cliché has come home to roost in hard rock and heavy metal more than other genres. Maybe it’s the drugs, but even when the world is confusing and strange to sensitive artists, this one should be left out.

Try this instead: Maybe this concept of confusion and uncertainty can be expressed more easily through music than lyrics. That's what psychedelic music is, right? Grab your wah-wah pedal and soak those tracks in delay.

How many times have we heard about how far the songwriter will walk, climb, or swim to reach a lover? And isn’t this whole concept a little archaic? In a world in which one can drive through a tunnel from England in be in France minutes later, the idea of a loved one being thousands of miles away just doesn’t have the impact it did when all those miles had to be on horseback.

Try this instead: Being a week's ride from your beloved meant a lot more in the 1800s than it does today. That power of distance returns when the song itself is a period piece, taking the listener back to early times, as Cordelia’s Dad does on this folk number about sailing across the sea in exile.

Who knows when or why we started calling everyone "baby"? Think about your friends and family. Who in your circle can get away with calling you that? Technically, calling an adult a baby is a metaphor... just a really, really lame one. But if you're going metaphorical, the sky's the limit.

Try this instead: You can use any pet name or any comparison you'd like. Nobody thinks of AC/DC as an especially poetic band, but when Brian Johnson sang "she was a fast machine" on "You Shook Me All Night Long," that was actually a pretty nice metaphor. Think how much weaker the line would have been if he sang, "She was my baby." Try anything, anything but the baby.

Birds, with their beauty, their spectacular aerial skills, and their long migrations have always inspired artists of all kinds. Songwriters are constantly learning to fly or mending damaged wings, two metaphorical clichés that deserve to finally die. That doesn’t mean that all flight metaphors need to go, but if you’re going to call someone a bird, at least be specific.

Try this instead: The names of specific species or types of things often have more poetic and evocative value than vague terms like “bird,” as Sun Kil Moon explore on their whole album Admiral Fell Promises. Songwriter Mark Kozelek mentions hummingbirds, pigeons, and gulls to give his listeners a sense of place, evoking oceans, deserts, or pastoral scenes.

Think whip-poor-wills, mockingbirds, redstarts, harriers, and nighthawks. The sounds and appearance of different birds can conjure thoughts of specific places and times, like geese flocking in the fall in New England or the calls of thrushes in the spring. But let’s give the eagle and the dove a rest; they’ve definitely done their bit.