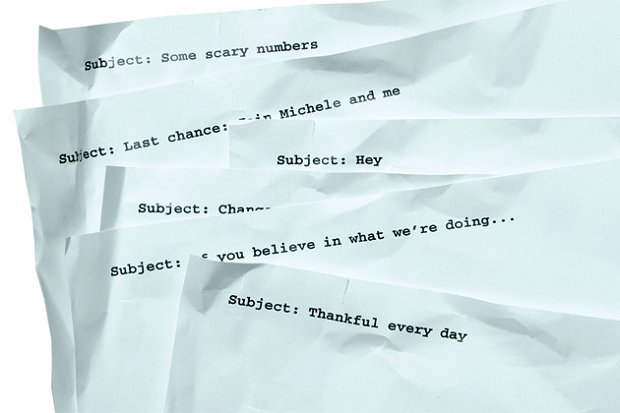 Barack Obama has been praised for his catchy subject lines. (Image via bloomberg.com)

These days, everybody gets too many emails, no matter who they are. Between brands, bands, work, friends, and family, there can be hundreds of messages coming in every day, and that's before any spam is considered. People are only looking to read emails that pertain to them and their interests, and you need to show them that your message fits into that immediately, otherwise it'll either be deleted or ignored entirely.

Here are a few dos and don'ts you should follow when it comes to writing the best email subject line you can.

Do mention the location (if applicable)

Personalizing emails can make people more likely to open them, but only if done right. People like to see that you’re paying attention and perhaps that they weren't just one in a million getting the same email as everybody else, but at the same time they don't like strangers keeping too-close tabs on them. If you were to share somebody's full name in the subject of an email, it would look creepy (and just plain weird), but adding a city name is a comfortable level of personalization, and it's helpful to the reader. If your band is going on tour in Baltimore, feel free to let them know. Simply saying, "We're on tour" is vague, but saying the date and city is just shy of a call to action.

Do keep it short

Most people are reading emails on their phones these days, so keep that in mind when you're constructing every part of your message, especially the subject line. This is the first thing recipients will see, and it will catch their eye when they're scrolling through dozens (or hundreds) of other messages. If the sentence (it really should only be one) is too long, readers won't see the entire thing, and they're likely to keep moving. If you can get enough across in just the space they'll see, you're off to a good start.

Do make it timely

Adding something into the subject line that gives people a reason to open it now – opposed to later, which isn't likely to happen – is also important. Nobody has time, and everyone is busy, so why should they take even a few seconds to open your email? Is your album dropping tomorrow? Is your new single available now? Are there only a few days left until you perform at the local music festival? If there's timing in your messaging, they might just make time for you.

This is common sense to most people, but I still get plenty of emails that don't follow this rule for one reason or another. Special characters may grab a few people's attention, but in reality, they don't always come through as you've typed them. Different email providers, devices, or operating systems may show infrequently used letters, numbers, and other things differently, and you don't want to send out an email with odd question marks and whatnot to thousands of people, do you? If you're comparing yourself to Beyoncé (which, yeah right), you may want to just call her Beyonce.

With so many emails coming from every direction and sender all the time, people are becoming a lot more choosy with what they open. Don't bother sending anything if you're only going to say something like, "Hey, guess what?" because chances are people don't care. Vagueness is also an indicator of a fishy, suspicious email, and people are getting smarter about what to open and what not to open everyday.

Don't use all capital letters

This one is just obnoxious, and anybody who has ever received one of these emails would agree. You can convey any emotion or sense of urgency without needing to use all caps. Sometimes a single word or name of a place or band might be in all caps (especially if the band name is usually shown that way), and that can grab people's attention. Other than that, try to stick to using punctuation and capital letters appropriately. People will thank you, perhaps by opening your message.