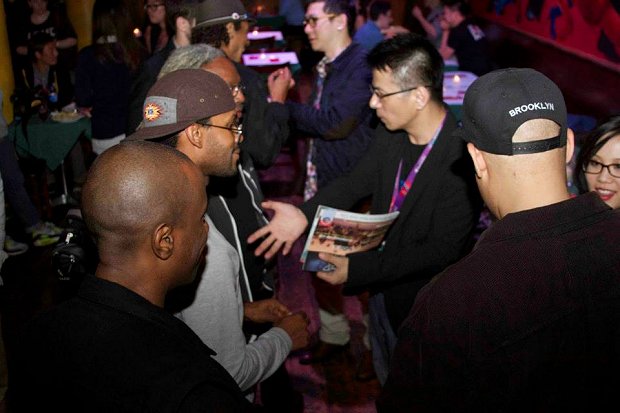 New York City's annual CMJ Music Marathon festival is right around the corner, and I thought this year's music industry conference-slash-festival-slash-shitshow would serve as a handy setting for a round of sage(ish) advice.

CMJ is traditionally populated almost exclusively by badge-wielding, subway-fearing college radio kids, music business muckity-mucks of various description, and hapless music fans caught in their crossfires. The whole point of it is, ostensibly, to introduce or "break" new bands to the college radio audience, but it ends up being more of a citywide industry networking event fueled by free booze and youthful energy (but mostly booze). So how do you catch the attention of the "right" people during this weeklong bacchanalia? The same etiquette translates over to most big music business events. Every situation is different, but for starters, here's what not to do:

For the love of all that is holy, time your introduction properly. If you spot someone you've been dying to meet standing across the room laughing with a group of people, do not bound over and chirpily introduce yourself while nudging your target's real-life friend out of the way. That's a surefire way to come off like a total inconsiderate dick, and make a terrible first impression on both your target and everyone within earshot. Be patient. Wait until the person you're trying to engage is on his own at the bar, or checking his phone, or walking around (unless he looks angry or stressed – in which case, leave him alone, obviously). Keep in mind that there are literally hundreds of people floating around, all hungry to make new contacts and create lasting impressions on a smaller number of industry folk. Don't be the person they remember as "that asshole that interrupted me during Dana's wedding story."

2. Come on too strong

Once you've been introduced to someone important or interesting, make sure not to freak out or overcompensate. Just be chill and respectful, and keep your intuition sharp. Don't linger or draw out the conversation; these people almost definitely have somewhere else to be, and forcing them to spend an extra five minutes listening to you list your extracurriculars at school isn't going to do you any favors. Don't shove a copy of your demo or resume at them. No matter how important they may be, act like their equal. Confidence is key, but pushiness or neediness will sink any chance you have of seeming cool. Get in there, make your point, thank them for their time, and get out.

It's tough to make a good impression on a potential industry contact when you've been slamming tequila shots all night. Even if you don't throw up on their shoes or slur your words incomprehensibly, you're going to come off as a dumb, drunk college kid, and we both know that you're better than that. The siren song of the open bar is hard to resist, but think of it this way: there will always be more alcohol to be had in this world, but when's the next time you're going to come across the president of the management company you've been prepping your resume for, or the editor of the magazine you're dying to pitch in a casual, social setting? By that same token, if someone you'd been hoping to corner is obviously drunk or high, chalk it up to bad luck and move on; you do not want to bother them in that state, as they're either having too much fun or too bad of a night to bother being receptive to a new face.

If you're looking to catch the interest of an editor, manager, label owner, promoter, or other stripe of industry professional, do not hit on them. Don't do it. Just don't. It won't be worth it, and you'll blow your chance at coming across like a professional yourself if you spend the entire event making passes at every hot-shot that comes within grabbing distance. It's a cheap way to get attention, and a pretty surefire way to be written off entirely by the dozen other industry people who see you trying it on one of their colleagues. This applies to any gender, by the way.

If you get brushed off by someone, accept it gracefully and move on to the next introduction. If you ask someone whether she's listened to your album or read your pitch yet and she gives a noncomittal, "Oh, I've been so busy, I'll get to it soon" kind of response, thank her for her time and leave it – don't harangue her about it or assure her of how awesome you are. Don't get snippy or rude to people because they didn't have the time – or the interest – to engage in a conversation. Accept that these people are generally stressed out, busy, or working (or all three) at these types of events, and don't take it personally if you don't get to make the kind of impression you were hoping for. Don't go online afterwards and say Finn from X Records was an asshole or that Fiona from YZT Management was rude to you – that's an excellent way to ensure they never speak to you again, and to come off like a whiny brat to boot.

So really, it all boils down to a few simple points: Be polite. Be respectful. Be patient. Be cool.

Kim Kelly is a writer and music journalist based in New York City who writes about music and the culture surrounding it for Pitchfork, Spin, the Village Voice, NPR, Wondering Sound, Decibel, and many more. Find her on Twitter @grimkim.