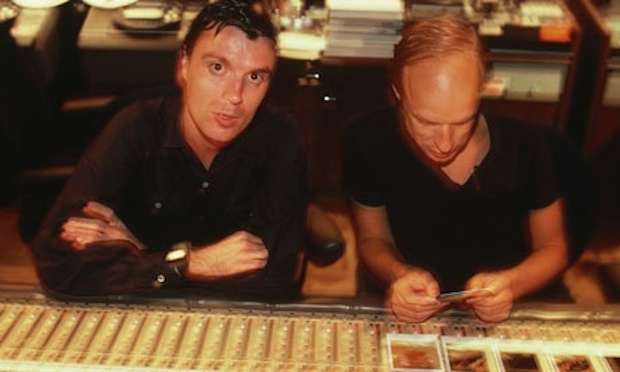 Using the studio as a compositional tool: David Byrne and Brian Eno during the recording of My Life in the Bush of Ghosts in 1980. (Photo by Lynn Goldsmith via CORBIS)

I love being in a recording studio. Whether it's for my own music, contributing to a friend's record, or just being there to provide creative and/or moral support, I get off on the energy being the studio generates. I love to watch other people work, be it the artist or the engineer, it's great to observe (and, thereby, learn from) someone else's creative process in action.

For some people, though, the studio is a drag. It can feel clinical or repetitive – and it can be. There are going to be plenty of times when you're going to have to hear a small snippet of music over and over and over again in order to solve a problem, or decide if it's the right decision, or if it's not good enough – which means someone will have to redo the part, which could take minutes… or hours. And if it's not your place, then chances are that every mistake is costing somebody – probably you – money.

For that reason alone, studios can move quickly from incubator to a pressure cooker. Like any other business, time is money when it comes to the studio – and you want to get your record done without breaking the bank or compromising quality in order to beat the clock. This can seem especially nerve-wracking if it's a new experience for you, so here are 10 tips to better prepare you for your first time in the studio.

1. Make a plan with your engineer/producer

There are many ways to approach the recording studio. Depending on the type of music you're attempting to document, you might wanna capture the manic intensity of a band playing live or break down the songs piece-by-piece in order to have more control over each element. Regardless, you'll want to talk with your producer about the record you're trying to make. Having a plan of attack will help when finding the right tools to accomplish the desired effect. It'll also help determine how much time you're going to need to get everything done in a somewhat efficient manner. This will also be an important time to share demos and discuss studio rules and expectations that you'll have of each other. Making records can be a breeze or a chore – and often both – so being on the same page with your production team will build camaraderie as well as a foundation for the chaos that is bound to ensue.

[A Musician's Guide to the Artist/Producer Relationship]

Money and time are almost always an issue when it comes to making a record. So, unless you have a crazy budget to spend experimenting in the studio, showing up prepared will go a long way towards a smoother studio experience. Having your songs down pat will often mean fewer takes. Fewer takes means you can get more done in less time – which can either save you money or (more importantly) give you more time to experiment with your creation. So practice up, get tight, and make sure all your gear is in good shape.

3. Keep within your budget

This should go without saying. Despite tight times and shrinking recording budgets, records are still getting made. Talk with your producer/engineer about what you have to spend, and come to an agreement. You may have to record in starts and fits or do it all in one night, but you can figure out a solution that's agreeable to all. Plus, if you're not acting too crazy and everyone involved is having a good time, then you'll be surprised how far your dollar will stretch. At the end of the day, everyone wants to leave with a record they'll be proud to put their name on.

4. Don't be afraid to bring in some of your own recordings

If you've been experimenting with recording at home – or maybe even made some cool demos in advance of your session – then you should bring them in as either references or as something to include on the album. Whether it's some weird textures or a killer guitar idea, if you have a good performance that's captured in cool way, then there's a good chance you can include it on the album – especially if you're recording digitally. Home recording can also be helpful as a way to save studio time. Feeling pressure to get that guitar just right? Feeling shy about performing your vocal? Give it a try at home and move on to the next task.

[5 Crucial Rules for Recording a Demo]

Whether you're looking to set a certain mood or looking for a specific production technique, words can fail to express what you want to happen during a particular session. But you don't have to be flummoxed by not speaking the language of trained musicians or producers – and this is where having songs or albums for reference can come in handy. You shouldn't only have these handy for your initial talks with your producer/engineer but during the sessions as well. It may feel like cheating, but hey, great artists steal. Or, to put it another way, would you rather spend 30 minutes waxing poetic about drum sounds or just play that Zeppelin track and move on to guitar solos?

We get it: you're in a rock band. Despite the music business being populated by some undeniable drug sponges, you're not at a studio to sit around and get smashed. You've got a job to do, and so does everyone else. That job is not to be your babysitter or hold your hair back while you destroy the studio's only toilet. There's nothing wrong with getting lubricated, but rendering yourself useless isn't helping your cause. And, let's be honest, it's a boring cliché. Track your parts and move on. Party once you've captured something worth celebrating.

7. Don't let your session get too crowded

Sometimes it's great to have friends and loved ones around to bolster feelings, give support, and act as cheerleaders. And the recording studio is a mythic place – lots of civilians have never been to one, so they're naturally curious to see what goes on, which usually dovetails into people thinking it's an excuse to party. The reality is that making a record takes concentration and focus, and a bunch of people making a racket takes away from that experience. So be mindful of whom you allow to hang out – and not just for your sake, but for the other people involved in making the record, too. If someone's having a hard time nailing his or her part or is shy, then visitors might impede progress. And don't forget about your engineer – you're paying for both expertise and ears, and a loud gaggle of your drunken friends is not what they want to hear. The tedium of the studio will make some friends and significant others become grumpy and negative, so politely ask them to leave – or let your producer/engineer be the bad guy. It's not bullshit to say that you're busy – you are!

In need of inspiration? Then maybe its time to consult the Oblique Strategies, a deck of cards created by legendary producer Brian Eno (U2, Talking Heads, David Bowie) and the late Peter Schmidt. Eno and Schmidt, who was a painter, came up with the Oblique Strategies as a way of working out creative dilemmas (i.e. getting stuck). When an impasse is reached, one draws a card – or a series of cards – and heeds the advice, whether it makes sense or not, with the intent being that it'll make you approach problems in a totally different way. Some of my favorite examples are: "Honor thy error as hidden intention," "emphasize differences," "fill every beat with something," and "go outside, shut the door." Decks can be purchased online, but there are also a few websites and apps that will suffice. Or just make up a few of your own.

Even if you're recording your band live-to-tape, making a record isn't a natural process. Everything that happens is run through a variety of electronic gizmos in order to create a musical experience. Bearing that in mind, don't get caught up in how a record is supposed to be made – there's no such way. Use your time in the studio to try something unique – maybe use different gear. Your regular rig might be great for gigs, but maybe another setup sounds better on record. Embracing happy accidents and indulging spontaneous ideas can add unexpected depth and character to your recordings. Time constraints can also be great decision makers – which is to say, "The clock is running out. Don't overthink it. Make a decision." Furthermore, if something's not going according to plan, take a break or move on to another part. Or another song. Or another Oblique Strategy.

Things will go wrong. You might have clumsy fingers. You might run out of money or time. You might break a guitar string in the middle of the greatest solo of your life. These things will be frustrating, but don't let them get you down. Some records have the luxury of being polished to perfection. Most don't. And who cares? Perfection is boring. Soul comes from being human – and humans make mistakes. Harness the chaos, use it as fuel. Encourage your bandmates. Listen to advice. Have a vision, but don't be a tyrant. Making records is a team effort. Be open to the experience and surprise yourself. Releasing music may be easier than ever, but getting noticed is hard – so make something special.