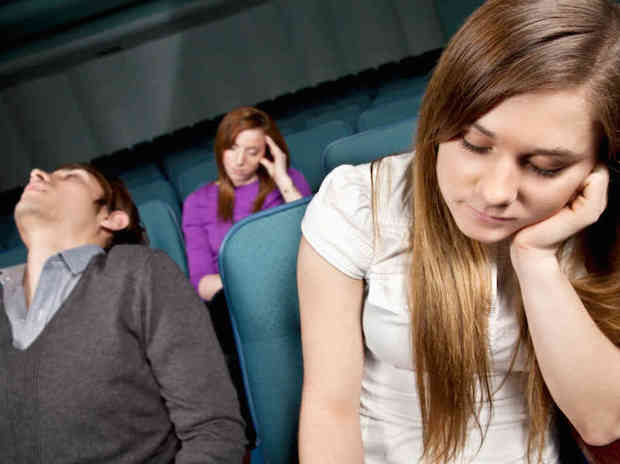 All musicians want their shows to be engaging and stimulating for their audience, even if the music isn't always uptempo. You want your fans to be locked in with you for the live experience. But as we know all too well, this isn't always the case. Even the best live bands have off nights, and virtually every band has had the unfortunate experience of playing to an uninterested crowd at some point or another. If you notice any of these five things at your next show, don't worry – we've got strategies for turning each of them around!

Seeing shows is a social event for many people. It's completely natural for your audience to have conversations throughout a gig. Between songs, maybe they comment on how the sound is or mention the band's new song that they're dying to hear live. Sometimes friends might catch up about their personal lives at shows. In a perfect world, chit-chat would be sparse, because your audience is really there to see you. But sometimes we notice people are talking through the entire show. You look out in the crowd, and only a few people are actually watching you full-on. If your fans have stopped singing along and dancing and have turned to their friends to make conversation all night, it might be time for you to step in and win their attention back.

This is a good time to talk to your crowd. Simply turning up the volume to drown out their conversation will just cause them to leave. Take the time to thank everyone for coming out, introduce your band, or tell your audience an interesting story. Those accustomed to nightlife have no problem holding a conversation over loud music, but if you're talking to the crowd, it will steer their attention back to you.

2. All eyes are on phones instead of you

In 2015, everyone is constantly texting. When you look out at your audience, you're guaranteed to see several faces lit up by glowing smartphones. This doesn't mean the crowd is ignoring you or unhappy with your performance; they could be meeting up with friends or uploading pictures of your show. But if you notice everyone has decided to bury their heads into their phones for extended periods of time, it's usually a sign you've lost their attention.

Musicians like Jack White will call out their audiences on texting too much. We don't recommend this for newer bands who are still trying to build a fanbase, though. While your sentiment might be, "Come on, everyone. Put down your phones, and let's have a good time," it will come off like, "Come on, guys! Put down your phones and pay attention to me!" This is a good time to bring out one of your more popular songs and to really start moving around onstage. People can simultaneously listen and text, but they can't text and watch. Do something creative. Put your guitar behind your head or jump around. Make something on the stage so visually appealing that they won't want to look away.

We've all been there – you finish a song, and there's this awkward silence where the crowd is hesitant to clap because either they're distracted or not interested in your performance (or perhaps they're not entirely sure if your song has ended – but that's got more to do with stage presence than anything else). Then, someone feels bad, starts to clap, and a few other pity claps follow. This usually happens when a melancholic singer-songwriter plays at a sports bar or a metal band plays at a family picnic.

Well, first off, don't play places that don't cater to your music. You can avoid the awkward half-clap by making sure your choice of venue matches your talent. Also, always be sure to promote your shows and rehearse. If you fail to draw a crowd, or you're not putting on a good show, you can't expect uproar after you finish each song. Put in the effort to play the right places, and if the crowd isn't feeling it, try playing to their interests. If you're in a sports bar and you realize your sad, lovelorn, slow-tempo song isn't grabbing the crowd's attention, play your most upbeat song. Really put in the effort to speed it up and give it new energy. If you're playing death metal at an outdoor family-based festival, try to bring out your lightest songs and tone down on the volume. Play to the audience.

Now, this is a serious sign that things are going downhill. Unless it's 4:00 a.m. and you've been playing since 10:00 p.m., your fans shouldn't be yawning and nodding off during your performance. Maybe it's a Monday night and your set starts at 11:00 p.m. and your fanbase is nine-to-fivers. We can kinda understand that. But generally, you want your fans to be engaged and energized by your music.

This is a good time to bring out a popular cover song. When you really notice you're losing the crowd's attention, it's likely because they've lost interest in your original songs. As an indie band, you might not yet have a CD for fans to familiarize themselves with your material, but everyone knows and recognizes a good cover. Pick out a strong, popular cover song that's in line with your genre of music and have it in your set as a backup plan to pick up the crowd. This will get people moving, singing along, and back into your set.

It takes a lot of energy to make it through a whole show. Not only do you have to stand in a packed club for hours on end, but you also have to get yourself ready for a night out, find a parking spot, and travel to and from the show. This can be draining, so you can't blame people for leaving early. But if the room is seriously clearing out, you've likely been playing to the wrong audience or playing too long a set.

No one likes to cut their set short and see fans turn away, but if the room is emptying out and your set has only a few more songs, consider playing the best song of your last few and then calling it a night. Learning to create a dynamic, engaging setlist takes time and a large bank of good material. It might be worth it to cut your set while you still have some of your fans' attention, as opposed to finishing it out for only the underwhelmed sound guy and bitter bartenders.

Everyone has an off night. You'll play plenty of shows that will feel uninspired and dull. It just happens. Sometimes the audience can't connect, and sometimes you can't connect to the audience. But it's important to be aware of your fans' engagement during a show. You want them to have fun, and you want to cater to them. Keep these five signs and remedies in mind next time you feel like your performance isn't captivating your audience.