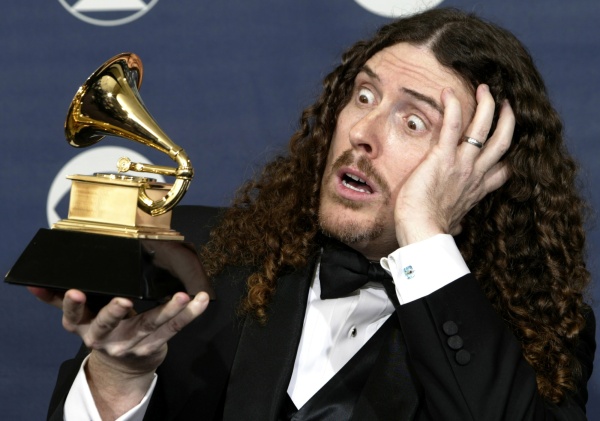 Image via The Atlantic

This article originally appeared on the Future of Music Coalition blog.

Beloved musical humorist “Weird Al” Yankovic recently dropped his new album, Mandatory Fun. Propelled by a set of eight viral videos, it quickly rose to the top spot on the Billboard charts, his first ever #1, with over 104,000 album sales. Al recently told the New York Times, “I wasn’t thinking, ‘Oh, I’m on the bleeding edge of marketing, this is going to be a business model that will change the world.” But as a longtime (possibly obssessive?) fan of Al, I’d suggest there’s still a few things we can learn from him.

Let’s say you are launching a new album with eight new videos. The obvious first place to go to premiere them would be the world’s largest video site, YouTube, right? Well, while Al’s new crop of videos will all end up on YouTube eventually, Al didn’t choose to launch most of them them there initially. Instead, he struck partnership deals with a bunch of different websites for exclusive premieres. As Al described in a somewhat bizarre interview with Fox Business’s Stuart Varney, Al got sites like Yahoo, College Humor, Funny or Die, and Nerdist to pay production costs of videos in exchange for the exclusives. These sites benefit from extra traffic and ad revenue, while Al gets their extra promotional muscle in a different corner of the online world. And getting these third parties to pick up video costs means that Al’s label RCA isn’t paying for it either, meaning the record will potentially recoup faster.

This runs counter to a currently popular notion that the best thing an artist can do is have all of their content in as many different places as possible as soon as it’s released. (To be fair, the album itself is on the major on-demand streaming services, but you wouldn’t know that from Al’s website, which is set up to direct fans to download stores and direct-to-fan physical sales, presumably because the value of those purchases is higher.) And, while most artists aren’t going to have the kind of leverage to be able to get a whole bunch of popular sites to pay for their videos, an artist’s ability to decide where and when his/her music is or is not used is something that can generate serious economic value.

(Incidentally, this is one reason that certain indie labels are reportedly angered by rumored clauses in YouTube’s contracts with indies for its new streaming service disallowing “windowing” and limiting exclusives. It’s possible that if Al had been constrained by these contractual terms, he’d have been unable to launch his album this way.)

2. Fair use is great, but actual permission can enable you to do more.

“Fair use” is a provision in US Copyright law that allows for the public to use portions of copyrighted works for comment and criticism. Every time a big fair use controversy comes up in the news, particularly when it's associated with a new version of a song with altered lyrics, people start making references to Weird Al’s supposed invocation of fair use, in cases ranging from Frank Ocean’s rewrite of “Hotel California” to Goldieblox’s ill-advised appropriation of the Beastie Boys‘ “Girls.”

In reality, Al doesn’t invoke fair use, but generally gets permission from the artist and songwriters and negotiates a license agreement. The writers and publishers of the original song then earn a share of royalties on sales of Al’s version. (Indeed, TMZ recently stumbled on Al asking rapper Iggy Azalea for permission backstage after her concert.)

Some commenters have speculated that Al doesn’t need permission, but asks for it anyway, just because he’s such a nice guy. But while parody is explicitly protected in fair use doctrine, one could make the case that most of Al’s song parodies may not be entirely parodic but cross a line into satire, which doesn’t enjoy the same fair use protection. Technically, parodies are supposed to comment upon the original work, but in Al’s humorous rewrites, the object of the lampooning is often not the song or artist himself/herself, but some other sociocultural phenomenon that Al is commenting on. (Exceptions might include 2011’s “Perform This Way,” a perfect deconstruction of Lady Gaga’s persona, or 1993’s Billy Ray Cyrus parody “Achy Breaky Song.”) As the Supreme Court held in Campbell v. Acuff-Rose Music:

…parody may or may not be fair use, and [the] suggestion that any parodic use is presumptively fair has no more justification in law or fact than the equally hopeful claim that any use for news reporting should be presumed fair…The Act has no hint of an evidentiary preference for parodists over their victims, and no workable presumption for parody could take account of the fact that parody often shades into satire when society is lampooned through its creative artifacts, or that a work may contain both parodic and non parodic elements. Accordingly, parody, like any other use, has to work its way through the relevant factors, and be judged case by case, in light of the ends of the copyright law.

And as attorney Rich Stim notes over at Stanford’s page on fair use, the amount of the original work that gets used has also been a factor in existing case law; Al usually uses songs in their entirety. Al’s original style parodies, where he writes original tunes but imitates the general musical style of the original acts are another matter entirely, and don’t require Al to obtain permission or any kind of license because nothing copyrightable is being appropriated. Examples include the new Pixies homage “First World Problems” or my personal favorite, the DEVO-spoofing “Dare To Be Stupid.”

3. Vinyl really is back.

You might be surprised to learn that Mandatory Fun is being released in vinyl LP format, as was its predecessor, 2011’s Alpocalypse. That was Al’s first release on vinyl since 1992’s Off The Deep End. By now everyone knows that vinyl sales are one part of the recorded music business that’s experiencing serious growth, reaching a 22-year record in 2013, and on track to set another record in 2014. Excitement about this growth has been tempered by an acknowledgement that it’s not enough to make up for digital declines, and it still only represents a small share of overall industry revenues.

Sure, it’s still a niche format, but it’s a niche with significant enough economic value that even singles-driven, mainstream-oriented artists like Al find it worth participating in. (Though this growth has created some challenges – the vinyl release was bumped back until August 5, quite possibly a result of the backlog at pressing plants created by all the new demand for vinyl.) Al’s always been willing to try new formats (2006’s Straight Outta Lynwood was realeased as a DualDisc), but it’s significant that even artists like Al who are deeply invested in a digitally-focused strategy see real value in analog physical media.

4. Every artist’s path is different.

Much has been made of Al’s recent speculation that this will be his last full length record. Having fulfilled his contract with Sony, he’s likely to just release singles independently, so he can more quickly respond to pop hits with timely spoofs. It would be easy to extrapolate from this that “the album is dead” or “you don’t need labels anymore.”

But remember: Al is weird, and so is his career, so we have to be careful about using outliers to define “industry trends.” No one would have expected the kid with the accordion sending 4-track home recordings to Dr Demento to have a number one album all these years later. While anyone can make a song parody and share it now, there’s not many people making a living off of song parodies, and there’s still only one Weird Al. For some artists, albums might not be the most important format, but for others, they’re vital. Some artists have a business model that doesn’t require label support; others find their assistance crucial. Most of the viral strategies that work for Al aren’t going to work for Godspeed You! Black Emperor, for example, even though they, too, are huge fans of Al’s work.

Every musician is different. Some, it turns out, are inimitable. And, yes, I’m kinda making a meta-criticism of my own blog post here. But here’s one thing that everyone can learn from Al:

5. There’s enduring value in being a really nice person.

Al is legendarily fan-friendly, and generous with his time and attention. Nearly every musician or journalist who’s ever encountered Al reports that he’s genuinely, disarmingly humble and kind, and treats his team exceptionally well, including his band and crew. (Amazingly, he’s worked with the same backing band since 1981.) He only plays all-ages shows, knowing that kids grow up into lifelong fans. That accumulated goodwill pays dividends, as a generation of younger comedians clamor to make cameos in his videos, and aging fans bring their kids to shows. While only a tiny handful of musicians will have a career as successful as Al’s, that “nice guy” reputation is something anyone can aspire to earn.

Kevin Erickson is a Communications Associate for Future of Music Coalition, a national nonprofit organization that works to ensure a diverse musical culture where artists flourish, are compensated fairly for their work, and where fans can find the music they want. A longtime advocate for all-ages music communities, Kevin is also active as a producer/engineer at Swim-Two-Birds studio in Washington, DC.