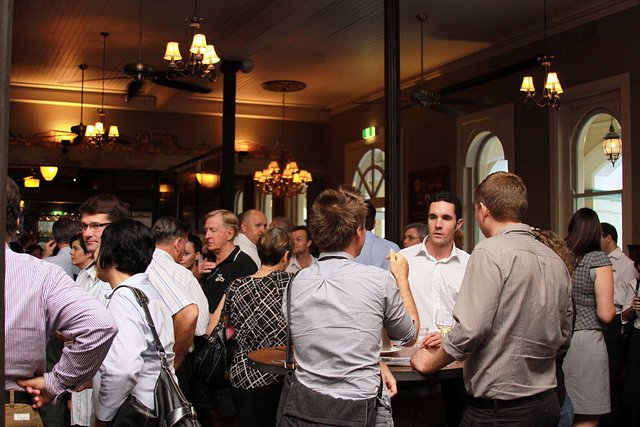 Networking in the music industry is an art more than a science. There's no rule book on how to network, but there are some tips that can make navigating the act of schmoozing more effective for you. Chances are that no one has ever taken the time to tell you the following tips – likely because some of them might seem like common sense – but pay attention, because they can be the critical element that turns a potential contact into a solid one!

People will tell you to be persistent but not annoying. They will warn you to not cross that invisible yet all-too-important line. I don't want to crush your spirit or discourage you from trying to network, but don't annoy people by talking too much or too loud. And want to know the one thing you should never, ever do? Don't crash the party. That is, don't walk up to a conversation and insert yourself boldly. If you take over a previously existing chat to introduce yourself or hand out a card, the people you're trying to connect with are not going to silently praise you for "confidence" – they're just going to be extremely annoyed that you interrupted their conversation.

2. No one owes you anything

Just because you can get yourself invited to a situation rich with networking opportunities, or you know how to schmooze and play the game, doesn't mean that anyone owes you anything. So don't take that attitude when you turn up at an event crawling with A&R guys, publicists, radio promotions staffers, and managers. Be nice. Really. That's all it takes.

People hit me up on Facebook daily, people I have never spoken to, and they follow up, getting rude and demanding a response. I'm not sure why they seem to think that I owe them anything. It's way worse when someone delivers that 'tude in person.

You can be friendly. You can be gregarious and make an effort to make the connection. You can follow up via email or in person. But don't always be "on" so much so that you seem like a tool just trying to make it. Be real. Be you. But don't always be "that guy." When I see a person who is always "on" coming up to talk to me at a show, I am already exhausted before they even give me a hug. Don't be the person people want to avoid.

Sometimes a simple "thank you" email when a connection is made is forgotten and not sent. To borrow a phrase from Mr. Mom, delivered by the amazing Michael Keaton: "It's real easy to forget what's important, so don't." Thank people when they give you their card. Send them a nice email after the fact. Give them a reason to want to stay in touch, even if it's merely because you are so damn nice.

5. Every scenario is a networking opportunity, but be discerning

When you're in a music industry situation, it's always a networking opportunity as long as you treat it carefully. If you see two people in a heated conversation, about a subject to which you are not privy, don't attempt to interject. Approach every situation carefully, since you don't know what you don't know.

6. Work to eradicate any social awkwardness

Social awkwardness is a fact of life, and some of the most brilliant people I know in this business are visibly uncomfortable in social situations. They say and do all the wrong things. I had one person that I respect and look up to make inappropriate comments about people's weight in front of me. I have been the recipient of the too touchy-feely hug. I brush it off, since these are people I have gotten to know.

But my suggestion is that if you have trouble being you in social situations, work to eradicate that. Practice having conversations. Take a class at a New Age Wellness Center (not kidding). There plenty of methods you can use to remove these discomforts when interacting with other humans.