6 Stage Hacks to Engage a Crowd 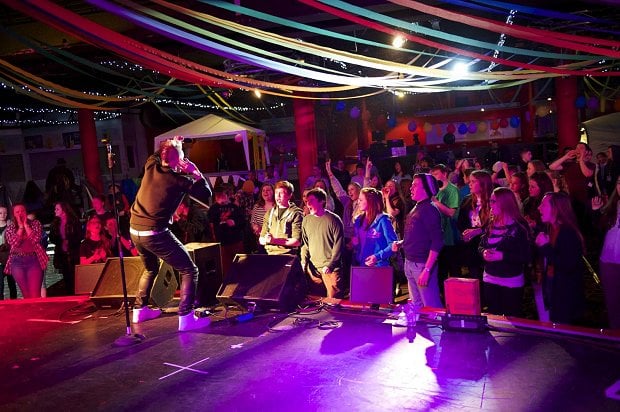 During a live gig, the relationship between the artist and audience is beyond that of simply performer and observer. Physically and emotionally, there's little separation between both parties and a huge deal of direct interaction, both explicit and subliminal. Self-assurance is essential and, as with so much in life, confidence is the key. If a band looks like they're enjoying their music and project a sense of confidence, that will convince a crowd as much as their material will. Conversely, bands that look shy and embarrassed will make the crowd feel awkward, and that negative emotion becomes associated with their music.

If you don't have the natural boundless confidence that lights up the room every time you walk in it, it's time to put these six stage hacks into action.

When you arrive onstage at a gig, it's vital to realize that the crowd wants to like you. Providing them with physical cues to express their support is the ideal way to break the ice – all it takes is a little physical mirroring.

The first, and most striking, example of mirroring that goes on between artist and audience begins before the start of the set. We've all been in the audience and seen performers clapping towards us as they come onstage. And we've applauded right back to the people we've paid to see. There is no moment when the Show Business Fairy lands on your pillow and whispers that you have attained the right to applaud. Walk onto the stage, approach its edge, extend your energy into the room, and clap towards the onlooking faces. Watch the mirrored response this will illicit even in a tiny venue. During the set, and at the end of your songs, applaud the audience and watch them as they return the gesture, creating that unmistakable sound of a gig going great.

Establishing eye contact with crowd members and projecting your energy outwards from the stage is a classic way to draw people into your performance. But if you're wracked with nerves and desperately trying to remember that weird vamp in the middle eight of that new tune that you only finished last rehearsal, adding the questioning eyes of strangers to the equation can be distracting and embarrassing.

[How to Command the Room's Attention at Your Next Gig]

In order to maintain trustworthy eye contact in police interviews, hardened criminals look between the eyes, or at the eyebrows, of those giving them a grilling. Take a leaf out of the criminal's book! To keep that energy moving outwards, choose a spot on the wall at the back of the venue, just above the heads of the immediate audience, and fix your eyes upon it. As you gather confidence, switch to the foreheads and eyebrows of the audience. It's the ideal hack to create the illusion, and reap the benefits, of eye contact without having to do a Vulcan Mind Meld with a complete stranger.

3. Even if you're not singing, learn the lyrics

For band members, learning the lyrics to all your songs is a tactic that pays dividends on multiple levels. Not only is it good practice to know your other band members' parts and the meanings behind the songs on a musical level, but by singing them onstage, you're also giving yourself a simple means of enhancing your own performance. And by adding that extra facet to your own onstage presentation, you're actually presenting the audience with tacit approval of the quality of the lyrics themselves.

People listen to music, and experience a show, as much with their eyes as their ears. If it looks like you're enjoying and inspired by your vocalist's lyrics – and you project that notion outwards – it's a reassuring and contagious signal that the audience should enjoy them and be inspired, too. And if you're the singer… well, then you should definitely learn the lyrics.

4. Create bullet points for between songs

An audience is attracted to a performance that feels natural, and creating that vibe is established as much between songs as it is during the music in the set. Repeating phrases and subject matter betrays nerves, and breaks the spell of confidence that gives a show that feeling of authenticity. Conversely, reciting verbiage from a script sounds stilted and contrived.

Having a cheat sheet of brief bullet points across the setlist to denote the general subject matter between songs, with phrases such as "thank previous band," "chat about album," or "mention merch/website" will prove invaluable. Not only will this avoid repeating subject matter, it's a great safety net to allay any doubts about what's been said and what's been forgotten. As you get more accustomed to the sheets, leave the cues as just one word to inspire or remind you of your subject, ensuring your speech feels spontaneous, but sticks to a structure across the set as a whole.

[Band Banter: What Should You Say in Between Songs?]

This little hack I need to credit to the UK music and broadcast legend Tom Robinson, who articulated this concept to me over on an interview on the PledgeMusic blog. He explains that people connect more intimately with a song's subject matter when you share it with them. When introducing your songs to an audience, you'll create this connection by asking about an what the audience has experienced, rather than telling them what you have.

Instead of beginning with, "I wrote this song about my ex-partner, who used to take a long time to get ready…," offer the audience the question, "Has anyone ever had an ex-partner who took a long time to get ready?" Engage the crowd by beginning your narratives with, "Have you ever?" rather than, "One day I…" Put a question mark on your statements, and you'll share your experiences before the song starts. That invitation of involvement, that glimmer of recognition, that closing of proximity will pay dividends in the way that they respond to the subject matter and theme of the performance that follows.

6. Spread the heat, and start the fire

This is a technique to exercise with great caution and only use once all the other stage hacks have been mastered.

We all have our vision of the perfect gig: the crowd dancing, engaged, and enraptured in the middle of the floor at the front of the stage. In reality, more often you'll find yourself playing your set with pockets of friends grooving together out in some far flung corner of the room with much of the dance floor cold and empty. This hack works to give the embers of energy in the room a little blow, so that the warmth of enthusiasm makes its way around the room. But, just like starting a fire, super-serving all your energy in one place will put the fire out.

Begin by rewarding the people who are reacting positively by expressing in a break between songs how great their energy is, how cool their clothes are, and how much your appreciate them. Win their confidence and endorse their enthusiasm – and approach – to the rest of the audience. When the following song begins, lean out towards them. Watch them reciprocate and spread their precious energy towards the stage… then abandon them for the other side of the stage. Give some attention to the rest of the room and let their presence move forward into the dance floor.

Return later in the song, giving them some more attention by singing or clapping towards to pull them further in... only to cruelly abandon them once again, taking your attention back to the people on the other side that that are, by now, getting the picture and beginning to move too. Across the remainder of the song, fluctuate your attention back and forth between the groups, pulling them in, letting them go, spreading their heat around the room. Before long, they'll have the dance floor on fire.

P "Barney" Barnes is a campaign manager and blogger at direct-to-fan platform PledgeMusic.com, drawing on extensive gigging and DIY music business experience with rock/ska/electronic mashup merchants Sonic Boom Six. SB6 has released four studio albums, performed headline tours of Europe, America, and Japan, and have written and performed songs that have appeared on BBC Radio 1, Channel 4, BBC 2 (TV), Rock Band, and Sims 3 video games. Barney takes his coffee strong, black, and often, and would one day like to visit Australia.