6 Ways to Look and Feel Like a More Confident Musician 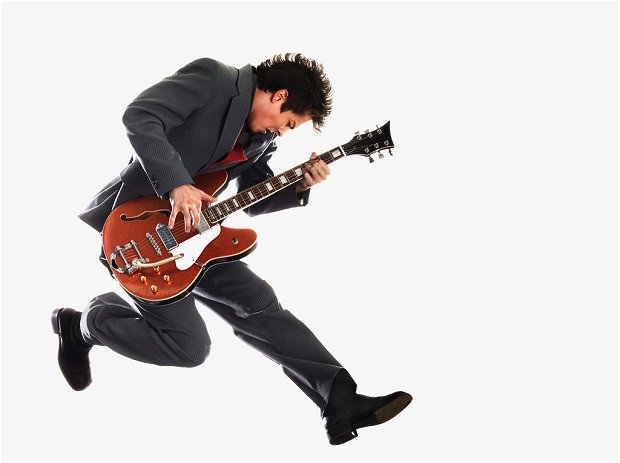 Some people are born with an innate sense of confidence that they carry with them through life. For others, confidence is trait that has to be won in battle. Among all of the talent that exists in the world and the unfortunate realities of the music industry, it's easy for somebody who doesn't have innate confidence to feel intimidated. Below are six tips on what to do when your confidence starts to falter, and what you can do to improve the confidence you already have.

One of my biggest pet peeves is seeing a band get onstage, and everybody is wearing cargo shorts, T-shirts, or flip-flops. If you're wearing the same clothes onstage as you wear when you run errands or hang out with friends, you aren't putting enough thought into it.

Whether you like it or not, image is a huge part of the music industry. When you take your look as seriously as your music, people notice. Now, I'm not saying that a full tuxedo or elaborate stage costumes and makeup are a requirement for every gig (though they might be for some gigs), but you should at least put a little thought and effort into looking professional when you're performing. If you show up to an audition with a professional band, and you can play at a professional level, and you look like a professional, you'll have way more going for you than the average musician.

Additionally, if you're in a band, coordinate! Some of the weirdest stage shows I've seen have involved some members wearing flannel and Converse and other members in suits. You don’t need matching outfits for every member of the band, but wearing similar looks will actually have a marked impact on your stage show and drastically contribute to your overall stage presence as a group.

Word travels fast about musicians who are consistently well-prepared and confident.

Every musical project will require preparation. I'm challenging you, however, to prepare like you've never prepared before. Start prepping for opportunities as if your career depended on it, because in many cases, it will.

Take world-renowned guitarist Pat Metheny, for example. As a teenager, he discovered the music of jazz vibraphonist Gary Burton and liked it so much that he learned the majority of Burton's compositions. When Metheny finally got the chance to see Burton live, he introduced himself and managed to convince Burton to let him jam. Due to his preparation, Metheny was able to confidently and proficiently execute any tune that Burton wanted to call. This later led to Metheny joining the group, which was his first big professional break.

Over-preparing can make your career. When you show up for an audition, rehearsal, or gig, the better prepared you are for it, the more confident you'll be. If there's ever a part of a song that you're unclear about, that's what you should be spending your practice time on. Make it so that there are no uncertainties when you go to play with other musicians. People will notice, and word travels fast about musicians who are consistently well-prepared and confident.

When you spend a lot of time struggling with a particular concept or weakness, it's easy to forget how far you've come from where your playing was in the past. There are many tools and trick you can use to measure your forward progress as a musician, and it's a system that I wholeheartedly recommend. It's a great confidence booster to compare where your playing is now to where it was before. Returning to old practice sheets that you used to struggle with will give you comfort in where you skills currently are and will help you be more confident.

My favorite way to do this is through recordings. These days, any smart device can make quick, decent-sounding audio recordings. Making a recording of what you're working on every week is, for one, a great way to hear yourself from a listener's perspective and identify problems in your playing that you might've missed otherwise. You can then take that recording and compare it to an older recording of yours, just to hear how much progress you've made. This way, you can feel more confident in where you are, while simultaneously identifying new areas of your playing to work on.

4. Spend time with people at your level

One of the fastest ways to improve on your instrument is to spend time with other players who are better than you. By doing so, you can pick up a lot of great tips and tricks on how to progress farther and faster. If you only hang out with players who are better than you, however, it can have a detrimental effect on your confidence. This might make it even harder to play with better musicians, as you'll be lacking skill and confidence simultaneously.

As important as it is to play with superior musicians, it can be beneficial to spend time around others on your same level if you feel your confidence waning. Remember that music is supposed to be fun as well as challenging, and it might be easier for you to have a good time and feel confident and comfortable when you're hanging out with players who aren't forcing you to push your limits at all times.

If you have business cards, CDs, stickers, or any other kind of merchandise, always keep something on hand that you can give to somebody. If you meet somebody new and the conversation turns toward your music, have something that you can give them to show that you're actually serious about your craft and not just a bedroom mirror diva.

Be careful not to be pushy or cocky when handing out these materials. If you're going to hand somebody a business card or a CD, make sure it's because they want it, and you aren't forcing it onto them. If you can avoid pushiness, having these items on you and ready to give out is a great way to show that you're confident.

Just as there are a staggering number of musicians in the world who are farther along in their journey to mastery than you are, there are also many musicians who are just getting started. And just as you've been helped by players who are more skilled than you, you may soon find other less experienced players coming to you for advice. Giving advice and mentoring other players is actually a really effective method of solidifying concepts that you've learned and reinforcing your foundation and fundamentals.

By taking an active role in the development of other musicians, you yourself become a better and more confident musician. You'll also, of course, have the feeling of satisfaction that comes from helping another person, and you may even discover that teaching is something you're good at and want to pursue further.