7 Essentials Bands Often Forget to Bring on Their First Tour 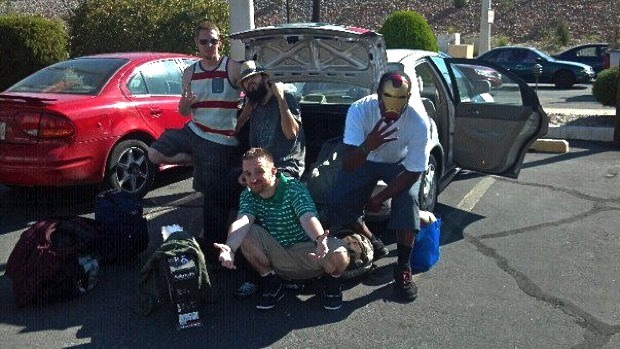 Jake Palumbo and his crew before their "4 Deep in a Honda" Tour. What did they forget to bring? (Image courtesy of Jake Palumbo)

Going on your first tour can be one of the most exciting times of your career. It signifies that people outside of your hometown are interested in your music and gives you the opportunity to meet fans you only know as Twitter handles and email addresses. That said, preparing for your first tour can be a bit daunting. You'll likely be traveling by van and will have to pack as efficiently as humanly possible. Sometimes that leads to mistakenly leaving some important items behind.

With that in mind, I spoke with six touring artists to find out what they neglected to bring with them the first time they toured, but now make sure they always have in the van. Consider this a checklist of things you didn't know you needed, but can't (or at least shouldn't) tour without.

When you're on the road, you end up relying on your smartphone quite a bit, whether for GPS, accepting credit card sales, looking up local hotels and restaurants, shooting videos from the road, taking pictures with fans, or simply being available to be reached by the people you're working with. With all that at stake, a dead battery can make for a hellacious time.

SpaceLAB Recordings founder Jake Palumbo experienced this firsthand. "At SXSW this year, I forgot to pack extra Samsung batteries, and it was nerve-racking trying to sneak and find a wall outlet everywhere we went to try and charge up to get 10 more minutes of battery life in hopes of not missing something epic that needed to be documented."

The fix is a simple one: "iPhone users may be out of luck here, but if you're an Android user you can order replacement batteries for around $5 each on eBay most of the time," says Palumbo. "Do not rely on having a car charger that plugs into the 12V outlets, mostly because you're going to have a van (or Honda) full of people who all need a charge at all times, because they've all let their battery run low."

Kristen Marie of the metal band Conquer Divide adds that if you can find a way to share, you can maximize your van's 12V outlet with a power inverter. "Our first tour ever, we didn't bring a power inverter for the van," she remembers, "and our phones and laptops were constantly dead. It's a must-have! Not all venues have accessible outlets for charging."

[6 Tips to Keep Your Phone Alive While on Tour]

You may not be running through airports, but according to Brooklyn hip-hop artist Rabbi Darkside, a rolling bag will still be your best friend on tour. "I carried waaaaay too much weight on my back my first few times out," he confesses. "Gotta work smarter, not harder."

When it comes to staying clean, Rabbi Darkside swears by Dr. Bronner's Soap, saying, "It's body soap, laundry detergent, shampoo… even toothpaste in a pinch. It makes hotel sink laundry a breeze."

Conquer Divide's Kristen Marie adds that if you're going to be performing in the blistering heat, you should consider bringing your own shower: "I recommend a solar camp shower for summer tours because a lot of venues don't have showers."

Just because you're on tour, it doesn't mean your entire diet should turn into something akin to a kid's when he's left home alone for the first time. "Health on the road is super important, so I make sure to have my essential vitamins and nutrients on hand for the shows," Phoenix-based hip-hop artist Mega Ran explains. "No time for sickness – the show must go on!"

If you're a skater, there's really no reason to leave your board at home. And even if you aren't an aspiring Tony Hawk, according to Thomas Becker of Kansas City-based rock band Beautiful Bodies, a skateboard can still be an incredibly useful piece of equipment. "A few years back, I brought a skateboard on tour. Since then, it's come on every tour with me," he explains. "Skateboards are rad for two reasons. First, they are a small and (relatively) fast form of transportation. I use mine to explore a city when I'm waiting to soundcheck or want late-night eats after a show. Second, skateboards are great for hauling gear, merch, and all the other junk that we somehow accumulate on tour."

Books are a great way to keep yourself occupied during long drives when you aren't the one behind the wheel, or when you want to kick back after a show. This is why, according to Rabbi Darkside, if you're going to be on the road for a while, an e-reader is a wise investment. "I love reading. I usually go to a bookstore and drop $60 to $80 on books just for the road, but that can take up serious space and add weight. Now that I've entered the e-reader world part-time in the last year, I've cut down on literary weight.”

Okay, I know – time isn't something you can technically pack, but it's something you need to schedule into your tour. Anika Pyle, frontwoman of the Brooklyn punk rock band Chumped, notes, "Vocal warmups are not a physical thing, per se, but they are something that I'll never do another tour without. Warming up is essential to making sure you can keep singing every day for 30 to 45 days straight. Our first tour I spent a lot of money on cough drops and singer's spray. If I had just taken 20 minutes to sing some 'oohs' and 'ahhs' before we went on stage, I could have saved myself a lot of pain."