8 Cheap Merch Items That Bring Fans to Your Table 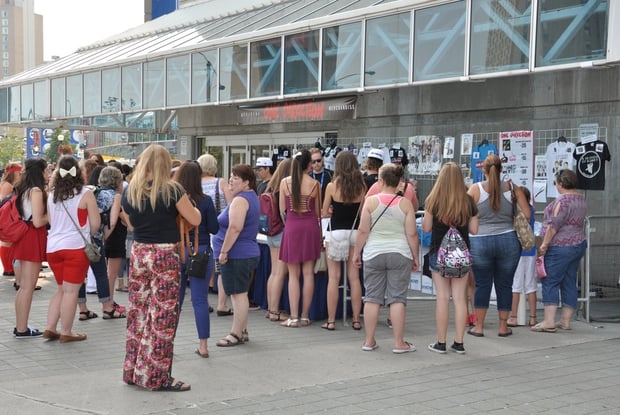 Selling merchandise is incredibly important to most musicians, especially those who are independent or just starting out. While you'll surely make the bulk of your money on things like T-shirts, CDs, and vinyl, there are so many other items you could be selling that fans would be interested in opening their wallets for.

Cheap merch might not sound like it’s worth your time, but in some ways, it really can be if you do it right. If you have a sign on your table that lets everyone at the conert know there are items priced at under $5 (or less!), you'll attract many more attendees, as people often go into these experiences expecting your offerings to be expensive.

Low prices bring them in, and from there, it’s up to you to benefit. Once they're at your table, form a relationship with them, take a photo with them, and see if you can upsell anyone and everyone to a CD or T-shirt.

I looked around at companies that print merchandise for bands to see what they offer at a low enough price that would allow you to sell things for only $1 or $2 and either not lose too much or even make a few cents. There's a lot more than I thought there would be, and there are a number of things you’ll want to consider having made to sell on your next tour.

Download cards might not be the most obvious choice, but they're the only one I found that allows you to actually make money selling your music. Download cards seem to have gone by the wayside, and that’s a shame, because they can absolutely serve a purpose and make you a bit of cash.

You can have cards that allow fans to download as much music as you want for really cheap. I found 500 for just about $100 at Bands on a Budget. At that price, you can sell a tour-specific EP or even a single and still make money with every purchase.

These are one of the easiest things to have made, and I think every band that’s ever existed has had pins at one point in their career. I even had pins made for the band I was a part of in high school, even though we never created any real music!

Pins are incredibly cheap, and they tend to move quickly. Fans love them because they can put them anywhere or take them off and move them around. Feel free to have more than one design printed and convince people to buy all of them or even offer a deal on the whole set.

Stickers are great, as they're also a go-to merch item for every artist on the planet. Who doesn’t have stickers? In fact, while this article is all about selling merch, you might want to think about getting these made just to give away.

Stickers benefit you because they essentially act as free advertising, promoting your logo and brand name (which is actually just your band name) with every one you give away. Sell them if you like, but you can get them so cheap, they might be worth more as marketing tools than as part of your income.

Not all of your fans are going to need guitar picks, but they're a fun item to offer... if you’re making guitar-oriented music, because otherwise it’s just a bit silly.

Selling guitar picks is something you should really try and do after a show when your fanbase is feeling the most inspired to pick up an instrument and start creating their own tunes. Offer them as items that aren’t just connected to you and your band but also come with possibilities, and you'll sell more.

In my time, I've collected a handful of plastic and rubber bracelets bearing the names of artists that I love, and I’ve always had a fun time wearing them. They may not be the most fashionable pieces of jewelry I’ve ever seen, but they don’t need to be in order for fans to want to own them!

They're also a lot cheaper than I originally thought they were. I found a company that makes them for under $1 per piece, which makes it pretty easy to move at a reasonable price.

I haven’t seen a lot of bands trying to sell pens, but I’d love if more did. A lot of merch items are things that fans can buy but they don’t need.

Another band T-shirt isn't a very necessary thing for most concertgoers, and sometimes convincing people to hand over their hard-earned cash for something that doesn’t actually have a lot of utility in their lives isn’t easy. Pens are a simple item, but who doesn't need another pen?

Okay, this one is just for fun. You won’t get a lot of advertising from this option, and I can’t guarantee that the company you order these from will have the best-tasting selection, but how fun would it be to give out (or sell, of course) chocolate bars with your band’s logo on them?

In fact, there are a number of options if you’re going this route, and it all depends on what you want to spend and what works best with your brand. There are different ways to get anything from Hershey’s chocolate bars to fruity gum to mints with your colors and logo all over the packaging, which fans will probably enjoy just as much as you.

Is this option a huge moneymaker? Probably not, but it’s cool.

I’m not suggesting you start selling drinks at your merch table, but there might be something you can work out with the bar that would benefit both parties. Maybe you can offer two drinks for a certain price which gives the fans a discount and you a small piece of the action?

Or perhaps if someone buys a larger, pricier piece of merch, you can offer them a drink ticket, which you’ll pay for at a special price you’ve worked out with the establishment.

Alcohol is something that many attendees will be interested in anyway, so you should try and find a way to work it into your offerings.