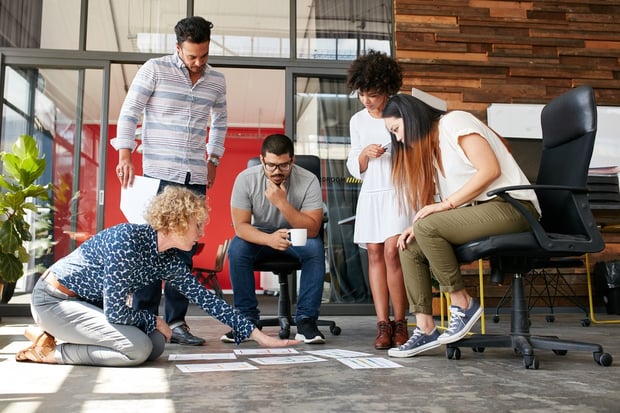 Sometimes it takes a whole team to run one album campaign... unless you know what you're doing! (Image via Shutterstock)

One of the major issues for any DIY band is getting your music heard, am I right? Maybe you feel like all your tweets are going to a black hole with not a like or retweet to be found. Or maybe the Facebook algorithms are keeping fans from even seeing what you post. And then there are all those great blogs that you think should cover you, but you don’t know how to gain their attention or even when and what to send.

I’m not going to paint a pretty picture and say all you have to do is follow the simple steps below and you’ll have instant success. You won’t. Promoting your music to people who don’t know (or care) who you are is really hard work. You have to be patient. You can’t give up easily when you start to discouraged. And most of all, you have to be ready to work.

Below is a simplified map of a 12-week publicity timeline for an album or EP release based on how we carry out our campaigns at my firm, Green Light Go Publicity.

Week 1: Get your ducks in a row

Okay, I know you’re ready to just make this thing happen. You have your finished album all mastered and ready to go. You want to just send it out to the world right now and watch everyone pay attention, because it’s just that amazing. I hear you. But guess what? It doesn’t work that way.

If you want to do it right, you need to start off by planning everything out first. If you haven’t already, create an EPK where members of the media can get the information they need about you. Hint: your Sonicbids profile is an EPK!

Also, set your release date three months in the future so you have time to build up to the release. The press probably doesn’t know who you are and needs the time and impressions you're about to create to get there.

You should also set up distribution for your album using a service like CD Baby so it'll be available on Amazon, iTunes, and Spotify upon release.

If that writer is only covering established bands, most likely he or she is only going to cover those big artists. Don’t waste your time on people who won’t care about your music. That’s only going to leave you bitter and frustrated. Find the people who will care, and start there.

Once you’ve built your list, you also need to write up a press release to send to those people on your list. You’ll send out the press release next week.

You should send out the press release to your media contacts on your list this week, and then wait a day or two to start pitching them on covering the first single you’d like to release (make sure it’s downloadable because that increases your chances of coverage).

Do not send photo or MP3 attachments when sending your pitches and press releases. These should be links to the files where they can listen and view – ideally, these are all available on your EPK.

[Ask a Music Journalist: 7 Must-Haves for Your Band's Press Release]

Start searching for coverage on your band via Google and Twitter. If you find coverage, be sure to post on your social networks and tag the outlet thanking them for coverage. This goes a long way with media and shows you’re willing to promote them as well, which means they will be more likely to cover you.

This week, you should follow up with all the media you originally pitched to see if they have any interest in covering you. If someone replied to your original email a few weeks ago and showed interest, check to see if they covered you. If they haven’t, then simply check in to see if they're still interested. Some outlets will tell you they don’t want you to follow up, and you should respect that by not following up.

[The 4 Rules for Following Up on Press Requests That Music Publicists Live By (And You Should, Too)]

For the next few weeks, you’re simply continuing to follow up with those who showed interest. You should wait about two weeks before following up again, as a general rule. The only exception is when it’s something time sensitive like tour coverage or an interview.

For the ones who haven’t responded, keep researching the outlet to see what they're covering and how you could fit into it. If you find a specific article that connects to your band, pitch the writer or editor on that specific article.

Week 10: Send a reminder about the album or EP release

Members of the media are busy, and most likely have forgotten about your release by this point. This week, you should send another press release reminding them of the upcoming release date. If you’ve received new press quotes about the album, include those as well. You should also begin sending reminder emails about the release.

Continue to remind the media outlets you weren’t able to get to last week that your release is next week. Make sure you're updating your social media pages about the release date as well.

This week is all about branding on social media with release information. If you have outlets that promised coverage, check the site for coverage and follow up if you haven’t seen anything yet.

Phew! I warned you it was hard work.

There are also a lot of additional minute details to help make a publicity campaign a success. If you’re up for the challenge, Green Light Go has just introduced a new low-cost program called Ignition for bands who can’t yet afford to hire a publicist, but really are ready to get their music heard and put the work in to make it happen. The program gives a step-by-step list of how to promote your release with easy, actionable steps to make it happen. Find out more here.