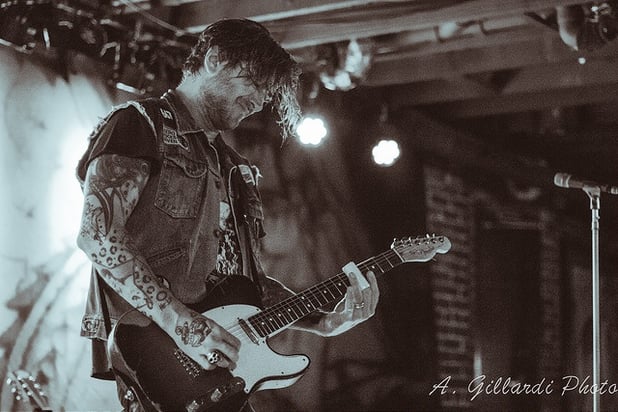 Making money as a musician is difficult, and one of the best ways to supplement your income is by writing and producing for other artists... if you can make it work. Some artists want to get into that business badly, while others think it’s a form of selling out, and they don’t want anything to do with it. There seem to be a lot of misconceptions about what actually goes into writing and producing for other musicians, and it’s a tough field to both explain and understand.

Butch Walker is a singer-songwriter who's played both sides of the industry extremely well. He makes his own music, and he's also written and produced hits for artists like Fall Out Boy, Avril Lavigne, Taylor Swift, Panic! At The Disco, and dozens of others. He recently talked to me about how he makes it all work, what he’s learned from this kind of work, and how it really is making him some good money.

1. These opportunities can come out of nowhere

Walker made very clear that while he might be one of the most sought-after producers and songwriters in the industry, this career isn’t what he was looking for, and he doesn’t go out of his way to look for this type of work.

"I’m not out there fishing for it," says Walker, "but I've never – and this is not a brag, I just don't know how else to say it – I’ve never pursued anything. I've never pursued someone in particular. If someone calls and wants to work with me, and it seems interesting, I'm willing to take a gamble on it."

Now, this might not be how things will work out for you, but it should help you stay optimistic. These kinds of opportunities can come out of thin air at any time, and you should do your best to make sure you’re in a position to accept them as much as possible.

[8 Ways to Set Yourself Up for Music Career Success]

2. If it all goes well, you can make a lot of money

While one or two tracks might not pad your wallet too much, if you help create music for others for some time, the royalties can keep you living very comfortably. Walker wasn’t shy in explaining how much these activities have helped him make a living when we spoke. "I'd say about half to three-quarters of my money comes from that, only because I don't tour nearly as much as I used to, because I don't have to," Walker says.

3. You can pitch songs to others that were originally meant for you

When I asked how he writes songs for other people, Walker explained that he usually doesn’t. He writes songs to be songs, and sometimes they aren’t a good fit for him.

"Sometimes the thing that will happen is that you get to the end of it and go, 'Well, this definitely sounds like it would be better for a female artist or for a pop artist,'" Walker comments, adding that he sometimes thinks, "Maybe I can’t sell a lyric."

Having said that, sometimes things are just too personal to pass on to other artists, which I think every songwriter can believe and understand. Keep an open mind about every new piece of music you're working on, and try to be honest. Is this really for you, or would it be better for someone else?

4. Most of your songs will not make the cut

You can probably already guess this, but it’s worth noting anyway. Just because you’ve written something with or for an artist, that doesn’t mean it’s going to even see the light of day, even if they actually recorded it. Many artists, especially ones that have bigger production budgets, record tons of songs, and they only end up using a small percentage of them.

Walker explains, “You have to know that you can't get bummed out if you wrote a really great song with somebody and it doesn't end up on the record when they recorded 150 songs for it over the course of a year with 50 different producers and writers.”

Sure, it might be disappointing if you poured your heart and soul into a track and it doesn’t work out, but you need to press on and keep working. You never know what's coming up next.

5. Songwriting can be a political world

While we would all like to believe that the music industry is all about what is best and who's the most talented, anybody who's spent any actual time in the business knows that this isn't true.

“You have to know realistically going into it that, especially if it's for a pop record in the pop business, that that's a very political world," says Walker. "A lot of the time the people who end up getting their songs on the record might not be the best songs, but they played the best politics. They were hustlers.”

6. Don't give up on your own music

Butch Walker’s number-one piece of advice for those wanting to write for others, but still have their own projects? “Don't give up on either.”

Many artists think that they're either going to make music under their own names, or they have to give up that dream and work silently in the background for others. A great number of music makers do choose one or the other, but it doesn’t have to be that way. In fact, Walker suggested that one can actually help the other.

“The more you can be in touch with being an artist, the better a producer and co-writer you're going to be with artists,” he explains, adding that many successful writers come and go, but those who can continue to balance the two typically make it in the long run. He suggested that crafting tunes for you and others is “important for longevity.”