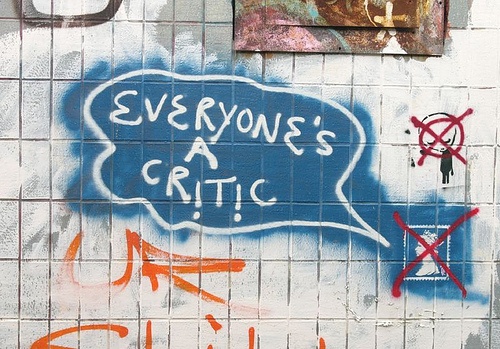 Are you getting the most constructive feedback you can on your music? Maybe you've just been sending your tracks to family and friends, who mean well, but might not know how to articulate what could make your music better. Or maybe you have a reputation for getting defensive when you receive negative feedback. Whatever the reason is, there are few things more important to an artist's growth than getting honest and informed feedback. When someone points out a hard-to-swallow truth about what's keeping your music from meeting its full potential, that's invaluable advice, as much as it might sting. Here's how to get the kind of feedback on your music that will help you develop into the best musician you can be.

What goes around comes around

This is one of the most important steps in receiving good feedback on your music. If you don't give thoughtful feedback, how can you expect it back? SoundCloud suggests the best way to get new followers and build a community on their site is to interact with other musicians and provide feedback on their music. If you listen to someone’s song and comment on it thoughtfully, chances are that they’ll be more likely to do the same for you!

So, how do you give good feedback? My high school art teacher always told us to use the sandwich model, which you're probably familiar with: start with what you like, comment on what you think could improve the work, and finish with something else you like. Keep in mind that personal musical taste and quality are not the same thing. if you're a rapper and someone sends you an alternative rock track, for instance, it might not be your taste, but you can still give an opinion that doesn't involve telling them to drop the guitar and pick up rapping.

Be available to your musician friends to provide thoughtful feedback – it will help your music in the long run!

Pay attention to how you react to criticism

As artists, we pour our heart and soul into our work. It's everything to us, and reading one bad comment can crush our whole world. You're not alone if you feel this way! However, it's vital that you respond well. If someone criticizes your music, it's going to hurt, but ask yourself, "Does that person have a point?" If you have a reputation for getting defensive and acting like people are attacking you when they're really just giving you an honest opinion, you're not going to get truthful feedback in the future. People will be afraid to tell you what they think because they know it will set you off.

You’re in the music business – you better get used to being critiqued. Drake sells millions of records, but guess what? He has critics left and right. If you disagree with someone's critique, simply thank him for his opinion, and let him know you'll keep it in mind. You don't have to take everyone's opinions to heart – that's the beauty of art, you being yourself. So, if you're unhappy with your feedback, just remain grateful and optimistic that you're going to make the progress you envision for yourself. But I can't stress enough the power of handling criticism well – it will open doors for you that a defensive musician won't ever walk through.

When you're not asking strangers on the internet for advice, you're going to be talking to your friends and family. They know you, and they want you to succeed and be happy. However, they're not always honest. We've all been there – we so badly want our best friend to be proud of herself that we encourage her blindly. While it's an admirable gesture of kindness and support, it's not always helpful.

When you send your music to friends and family, ask them up front to be honest with you. Tell them that you value their opinions and want them to give you the most unbiased feedback they can. While we all want our music to be perfect, we’re not going to grow from always being told it's great. It's the people who will tell you the truth that your high notes need some work, or that the production doesn't sound professional enough. It hurts to hear, but it will make you better in the end!

We all know that online forums can be notoriously harsh and insensitive, but it's actually not entirely a bad thing for musicians. Users there are going to listen to your music with total disregard for how it affects you personally. Assuming no one says anything purposefully insulting, this can be a huge benefit!

It's important to be well-spoken and well-written in your requests. You're not the only one asking for feedback, so you may have to fight to get your track heard. Be professional, and come up with a good invitation for people to stream your music.

If you're an electronic producer, dubstepforum.com has sections exclusively for giving and receiving feedback. Musicbanter.com is another popular forum for musicians to interact on. Find one that fits your style of music and your personality, ask for feedback, and again, most importantly, give feedback! While you may not agree with everything people write, they're going to listen to your music with a completely unbiased ear. That is priceless feedback. Just beware of trolls, and prepare yourself for the internet to show its ugly face here and there.

Contact musicians you admire who are one step ahead of you

Oftentimes, friends and family simply don't know how to give you feedback. To them, it sounds better than they could do, so they think you're amazing! It feels good to be "amazing" to someone, but it feels even better to be amazing to someone whose opinion you really trust.

In the 21st century, it shouldn't be uncommon to have music-related friends from around the world that you may have never even met, whether it's through SoundCloud, Spotify, social media, or online forums. Look for other independent musicians in your genre who are a bit more accomplished than you are, and single out people whose opinions you would admire and trust. Offer them an incentive – be genuine and creative in your approach. It will pay off, and may even make for a great connection down the road (just be sure not to spam people)!

Just like there are plenty of musicians out there who will give you feedback, there are music influencers. They may not be musicians themselves, but they have an ear for what's good, and they know which direction to steer you in. For example, if there's a certain music blogger you trust, befriend him, and ask for his feedback on your music. (Just make sure it's clear that you're asking for feedback rather than submitting the song to their site.) You may not always get a response, but it's worth an honest shot.

Maybe you know or know of someone who runs a small record label, music venue, or music shop – see if they think your music is all the way there yet. The most important thing to do when cold-calling people for feedback is to be genuine and give them space if they're not able to help. You're going to be blasting your music to influencers for the rest of your career; don't get blacklisted by following up too much because you haven't heard back fast enough.