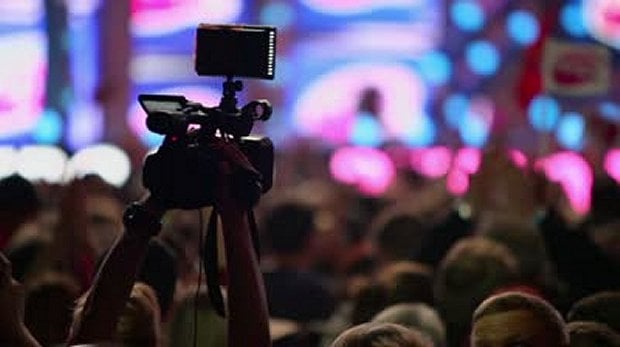 Since the launch of YouTube in 2005, music fans the world over have been witness to the online proliferation of what I like to call the "Crappy Cell Phone YouTube Concert Moment Video" (CCYTCMV), that now ubiquitous shaky, pixilated blur with overblown, distorted sound that cries out to the world "I was there!" People seem to love creating their own mini-memento of their concert experience, and after first being annoyed by the endless series of poor-quality videos on YouTube, I've come to appreciate the folk-art that is the CCYTCMCV. Something in the act of bothering to post that little grainy nugget with often indecipherable sound speaks of a desire to be a part of something larger, to be involved in a community, to share, and to create… or maybe people were just high, I dunno. Either way, the CCYTCMCV is now a part of the sea in which the modern music fan swims.

Think you can't afford to shoot a music video? Trust your fans to be the authority on what is happening onstage, and let them use the power of the CCYTCMCV to co-create a video with you! As a performer today, you have access to technology that would have made the Beatles faint. I recently asked the attendees of a CD release show at San Francisco's Great American Music Hall to film a song with their cell phones and send me the footage for editing into a video, effectively staging a 100-camera video shoot. What would that have cost you 10 years ago? If you're a performer seeking a wider audience, there's no excuse for you not to be creating video content.

Among the important benefits of this DIY approach are, obviously, low cost and a kaleidoscopic array of camera angles, shakiness, graininess, and poor color correction. Yes, that's a benefit! Remember the old adage about life giving you lemons? But the most important benefit of this approach is involving your friends and fans in the act of creation. Isn't your job as a performer to engage an audience and get people involved?

The space of this article does not allow for step-by-step instructions to create your video, but I would like to demystify the two steps of the process about which I have received the most questions, perhaps emboldening you to dive in yourself.

Your amateur videographers will likely provide you with a range of file types (.AVI, .MOV, .MPG, etc.). You can convert almost any file to one that suits your purpose with a program called MPEG Streamclip. "Oh no! Another expensive program?!" Nope. It's available for free. Thanks, Squared5!

Drag files from your computer into the MPEG Streamclip window, select "file," and from that drop-down menu select "Export to QuickTime" if you prefer to create videos with Final Cut. MPEG Streamclip can also convert files to other formats if you are using editing software that requires something different.

I used a live multi-track recording of the show for audio, but great results can be obtained by syncing up to any audience recording. The audio from some of the newer smartphones is surprisingly good! Use the best you have access to, but don't let lack of access to high-end gear stop you.

In Final Cut Express, audio and video files are dragged onto a "timeline." Drag an MP3 of your audio there first. It will be your baseline for timing. Find a rhythmic beat in the audio to use as your sync point, perhaps the first snare drum hit after a count-in. Listen to the audio and count with the rhythm. Hit the space bar squarely on the sound you will use as your sync point. Mark this point.

Now drag a video file into the timeline. The audio that accompanies the video will appear above or below your baseline audio. Mute the baseline audio, and listen to the video's audio, marking the same sync point in the same manner. Now drag the video so that its sync point is lined up with that of the baseline audio. Listen to the left channel of one of the audio sources and the right channel of the other (headphones help for this). You should hear the audio playing in sync with no delays. If you hear a slight delay, drag one of the files a hair earlier or later and listen again. Nudge until no delay can be heard. Voila! You just synced your video to your audio! Repeat for as many video files as you have.

Having never used video editing software before, I edited and uploaded a multi-source video to YouTube shortly after obtaining the software, and so can you.

My video, "My MySpace Friends Don’t Love Me (In The Real World)," can be seen below.

Joe Rut is a San Francisco-based songwriter and guitarist who has released six albums independently to date. His work has been featured on NPR, in film soundtracks and with various bands he's performed at festivals as varied as Nevada's Burning Man and Glastonbury in the UK.