What Are Band Managers Looking For? 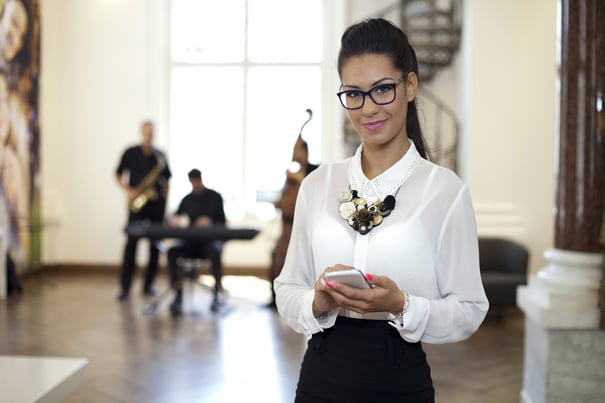 Your band is playing a dive bar, and you totally kill it. The audience is small but into it, and it's evident you're meant to be playing arenas. After the gig, a guy in a three-piece suit walks up, hands you a card, and tells you he's some famous manager and looking for an act just like you. “You have what it takes to be a star!” he'll tell you, before imploring you to call him. There's even movies and TV shows that emphasize this fantasy.

The fact is, this may have happened at one point in decades past, but it simply doesn't happen anymore. You need to work really hard at networking and hustling to get a “chance encounter” like that to occur. So how do you get a manager to notice you? Here are four tips to help you start on that path.

1. Set your sights a little lower

This is the hardest thing to wrap your head around. You know that situation where you're looking for a job in order to get experience, but they won't hire you if you don't have experience? It's like that. Let me explain why.

Back in the day, managers, A&R reps, etc. had time and resources to put into people. Many of those acts from the '50s onward were told what to wear, how to act, what to sing, etc. Sometimes whole personas were created. That practice started to peter out as the decades went on, and today is virtually non-existent. Being a great band with only a handful of gigs booked, no social media following, and no concept of who you are as an artist puts you on the bottom of the pile.

But just because you can't get a big manager who can put you on mega tours doesn't mean you should give up hope. Aim for managers that are young, hungry, or maybe just building their roster. A smaller manager will have more time to devote to you, be more willing to help you grow, and be much more accessible to a band that hasn't hit it big just yet.

Consider looking for recommendations on college campuses with a music-business program or put your feelers out and find out who other bands at your level are using. It may just be the start of the looking process, but it's a good place to start.

[4 Qualities Every Band Manager Should Have]

2. Focus on the music

Is your guitar player stepping all over everyone else with his solos? Are you unintentionally starting at one tempo and ending in another? Do you gel as a band? Bare minimum, if you don't sound great – polished and tight with great musicianship, there isn't a manager in the world that will want to take you on.

Be honest with yourself and your bandmates. Hold regular practices. One tip that I found very useful over the years is recording yourself and listening back critically. It can be hard to tell in the moment if something works, but listening to a recording can clear things right up.

You should all be taking lessons, too – even if you're at the top of your game. Many major artists still find gurus to go to every now and then to work on their chops.

3. Define (and refine) your look as a band

This can run the gamut from a “band uniform” (i.e., The Blues Brothers or Daft Punk) to just looking like you kind of belong together. Does your guitar player look like he's from Slayer while your singer looks like they front the church worship team? If you don't put much thought into what you wear on stage, it'll be painfully obvious to fans, bookers, and managers.

While that may not be a deal breaker in and of itself, it does help to have an image – fans want to be part of something unique and cool, and a good manager is really looking for the same thing. They want to be excited by your art. If they're not, the odds of them signing you go way down.

Look at other bands that have a similar style to you. What do they wear? Don't cop their style, but there's no harm in pulling off something similar. You'll find that most bands at least have a loose sense of style – maybe they all wear dark T-shirts, for instance. You can go as crazy (or not) as you feel is warranted. Feel free to explore and experiment. Whatever you do, though, it should at least look cohesive.

[6 Ways to Improve Your Band's Image]

4. Emphasize what makes you unique

Nobody wants to rep the millionth iteration of Imagine Dragons, especially if they bring nothing new to the table. It's good for artists to have an ear to the ground and a sense of what's working in the market, but don't follow it off a cliff.

I've heard way too many bands and artists going full tilt into “mainstream radio” while abandoning their own style. Doing this runs the risk of your music getting lost in the shuffle, especially when everyone else is trying to do the exact same thing.

Find your niche within your genre and really stake out that territory. Make it part of your identity. Talk about it with fans, in your bio, and on stage. This could be something musical (maybe you're bringing back the '80s guitar solo), or image (maybe you all dress up like Star Wars characters), or anything else you can think of. The sky is the limit. Any manager worth their salt will be looking for that unique “hook” that makes you stand out, so it's important for you to hone that.

A manager friend of mine tells me she knows within a minute or two of hearing a band whether she's interested in signing them. If they excite her as a listener and fan, she's on board. If not, she passes. And this makes sense – why would you want to work with a manager that isn't that into your music? They may be totally competent and professional, but they may not be as passionate for a band they don't believe in.

The bottom line for you: be as professional and put together as you possibly can. Be exciting on stage, and stand out as an artist. With hard work, great musicianship and networking, you will find someone who is passionate to represent your music!