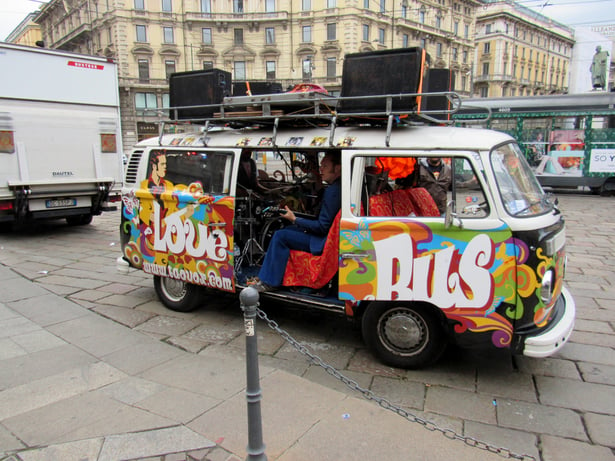 Photo by Dominick Corrado via Shutterstock

When non-musicians think of bands on tour, they typically conjure up scenes of crowded venues, indulgence in the form of sex, booze, and illegal drugs, and thriving young musicians without a care in the world.

The stereotypes associated with touring are often wrong and typically only pertain to established artists with resources and sizable followings.

Look closer at the touring segment of the music industry, and you’ll see a completely different and markedly less glamorous side to touring. Every night around the world, there are thousands of small struggling bands most people have never heard of taking stages to play in front of audiences of little to no people.

The following is a vague outlining of what touring is like for bands who aren’t famous, wealthy, or critically acclaimed.

Booking tours is a hellscape of pure tedium

Bands with big followings usually have booking agents and managers to book and route their tours. Unestablished bands and artists are on their own.

Emailing and cold-calling venues is an essential but typically awful part of DIY touring. Months in advance, bands usually split the duties of contacting venues and asking for shows. Most of the emails and phone messages small bands leave these venues go unanswered, and for good reason.

Even when venues don’t pay small bands to play (they often don’t), they risk losing money by booking them because they don’t have proven followings to show up and drink. This proves to be hugely challenging for small bands trying to build a national following, and they’re often forced to pursue shows for little to no pay wherever they can find them.

All the non-musical details are handled by you, the artist

From asking the venue’s bartender for payment after the show to procuring places to sleep along the tour route, all the non-musical aspects of touring are handled by the musicians playing in unestablished bands.

This means that musicians have the jobs of performing well on stage to think about in addition to a myriad of unpleasant tour obligations to consider. If you and your bandmates just partied till 4:00 AM in New York City, which one of you is going to move the van by 7:00 AM so it doesn’t get towed?

Who is making sure you have enough cash for toll roads?

When the friend you were supposed to stay with backs out at the last minute and you have no money for a hotel, what are you going to do?

Most musicians obviously love the performance aspect of touring, but situations like these often prove to be huge managerial challenges for unestablished bands.

The shows are sparsely attended and often story-worthy

From wretched sound systems to the experience of playing in front of literally nobody save for a venue’s staff, DIY shows can be rough experiences for unestablished bands. It all comes down to the economy of touring, which is heavily not in an unestablished band’s favor.

Unestablished artists and bands don’t always have the ability to bring people, and in turn money, through the door, so they’re left to settle for shows at places not ideal for hosting shows––new venues with no reputation or built-in crowd, raucous dives 30 years removed from their heydays, stripmall coffeeshops that want you and your band to convert to a different religion.

These places almost always lack audiences and the money to pay touring bands and artists. With some exceptions, this means that small bands are forced to make financial sacrifices in order to tour. Not only are they not being paid, they’re also willingly going without reliable sources of income for as long as they tour.

Ask an unestablished band about their experiences touring, and you’re likely to get inundated with tales of wasted audience members, sound monitor feedback horror stories, and the never ending quest for drink tickets.

You'll sleep on lots of floors

Since money is hard to come by in DIY touring, booking hotels or AirBnBs is almost always out of the question. Unestablished bands almost always spend their nights camped out on a fan or friend’s floor. This, combined with the fact that many bands drink and drug after shows, inevitably translates to a lack of sleep.

Night after night of this begins to wear on a band, even if it’s comprised of energetic musicians in their early twenties. But blowing even $50 on a room for a night doesn’t make sense when your band only made $27 the night before and still has to pay for gas to get to the next show.

You might just have the best time of your entire life

For new bands without performance experience, playing the same set over and over again is a chance to develop musically and forge a real musical identity. The friends unestablished bands make on tour often end up being important connections and resources later in their careers. And there’s something almost sacred about setting out with a group of musicians to defy the odds and actually find success.

Touring makes or breaks bands because it’s incredibly hard and thankless work. The musicians who can handle the many pitfalls of DIY touring are more likely to embrace music-making over the long-term than those who can’t.

Patrick McGuire is a writer, composer, and experienced touring musician.