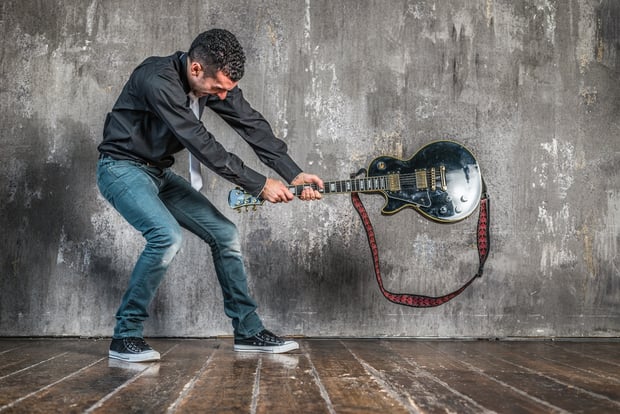 Despite what many of your friends or family members may think, choosing to pursue a career in music is not an easy path to follow. While some may picture a professional musician as someone who sleeps in late, sits around all day, and generally lives the rock-star lifestyle, in reality, being a professional musician involves a lot of tedious and exhausting work. For some, the amount of hard work involved, coupled with the burden of constantly having to prove yourself, can simply be too much. But what if there were certain strategies we could adopt that would lead to a more sustainable and enjoyable music career? Here are some ideas to think about if you’re concerned about music career burnout.

1. Adjust your expectations of yourself

Most musicians love the creative side of music – things like rehearsing, playing gigs, writing songs, and recording albums – and it’s no wonder; as creative people, we’re wired to love these things. If you want to make it as a DIY musician, however, you’ll have to spend most of your time doing things that aren’t creative at all – things like booking gigs, building a social media presence, pitching songs, fixing the transmission in your touring van, and so on. Building a career that lasts can be a challenge if you expect yourself to be just as good at all of these other tasks as you are at the creative side of music making. Just because you have the talent to be a musician doesn’t mean you’ll have the same talent for everything else.

The good news is that all of these jobs are things that can either be learned or outsourced. There are plenty of free resources out there for people who want to learn how to make a career out of playing music (like this blog, for example). There are also people like artist managers, publicists, graphic designers, song pluggers, bookkeepers, and others who can help you manage the tasks you can’t manage on your own (for a fee, of course). The trick is to know when to learn a job yourself and when to outsource it. Typically, it’s a good idea to at least try doing everything yourself at the start of your career. Then, once you’ve reached a certain level of success (for example, you’ve outgrown your local club scene, or you’ve established a significant following online), you can look into hiring a professional.

2. Make peace with the ups and downs

Creative people often experience life in extremes. One minute, the new song you’re working on could be the greatest song ever written, then half an hour later, that same song could be sitting in a million pieces at the bottom of the trash bin. While that may seem like crazy or irrational behavior to an outsider, to most musicians, that’s simply part of the creative process. That’s because creativity often demands both narcissism and modesty at the same time. You need to be bold enough to think you have something new to say to the world, but self-aware enough to be able to accept criticism and critique your own work.

The problem comes when you leave your creative safe zone and bring this artistic tension with you as you share your art with the world. Although you may think you’ve left these tensions behind in the studio, it’s easy to unconsciously bring this creative dissonance with you as you engage in tasks like promotion and networking. This can cause you to come off as either insecure or overconfident when talking about your music.

If you want to build a sustainable music career, you need to make peace with the ups and downs of the creative process, both in making music and in talking about your music with other people. You may think your latest album stinks, but someone else might think it’s amazing, so don’t color their expectations with insecurity or false boastfulness.

3. Adjust your expectations of success

For many musicians, the first signs of burnout can come when you take stock of your career and realize you’re not in the place you wanted to be. As creative people, musicians tend to dream big, and, as such, we often lose sight of what we’ve actually accomplished. We’re great at pushing ourselves to reach that next level of success, but not so good at noticing success when we actually achieve it.

For many, success comes in small increments rather than major breakthrough moments, which means that we miss out on all of the tiny milestones that lead to long-term success. It’s easy to look at massively ambitious goals like having your song played in a Super Bowl commercial or playing a headlining slot at Coachella as the things that matter, while we miss out on all of the small-but-significant things we’ve actually achieved.

When the time comes to take stock of your music career, pay attention to the little accomplishments you’ve had along the road. These could be things like collaborating with another artist you admire, moving from playing coffee-shop gigs to playing clubs and festivals, or just putting out great-sounding music that people are excited about. It’s all of these little accomplishments that add up to real success in the long term.

Maybe you’re not living the rock-star lifestyle you imagined, but if you earn any percentage of your living as a professional musician, you can congratulate yourself for doing something that many other people have only dreamed about.