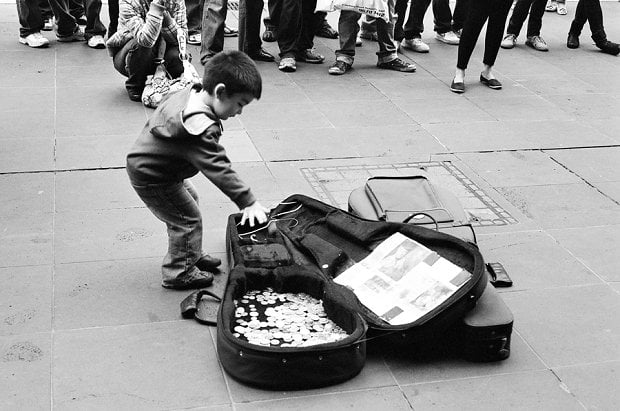 You've probably seen many lists outlining revenue opportunities. Here's a little twist on not just learning what they are, but also how to utilize them. In fact, some of these may never have even occurred to you. Here are five ways you start making money from your music right now!

By far, this should be the most important part of your music business plan now. In other words, this is where the real money is. Without boring you with music publishing and rights laws, here's a basic breakdown.

If you wrote and paid to record your own music, you are the songwriter, publisher, and label. This gives you an advantage over most majors, as they have separate labels and publishers to grant licenses for the master and sync rights respectfully. You can negotiate a deal granting the master (recording) and the sync (underlying song) rights all by yourself. This is called a "one-stop" or "pre-cleared" deal.

Every entertainment medium needs music: commercials, TV shows, movies, local news, web campaigns, and games. Try to start local first; find a local restaurant, car dealership, even a local filmmaker. Understand their messaging, then pair a track with it for your pitch.

Set up your YouTube channel to allow monetization, and choose ads that are less than 30 seconds (unless they're trailers). Fifteen-second entertainment ads pay best but can't be skipped. Every song you've ever recorded should have at least an album cover video and a lyric video. Uploading these gets your music into the YouTube content ID system, and you'll earn a percentage of the revenue share with Google on the ads.

But the key here is to have your music available for other content creators (like your brother's sister-in-law in her basement making fashion videos) to use simply and in a way it makes you money.

That's right. If complete strangers need to use music for their videos on YouTube, and your music is available, it's free for them to use, but you get paid. You must administer those rights on the platform and be a partner. This is a little-known secret: you cannot do this on your own, and you will not get paid if your music isn't administered properly. So use a service like Audiam or Rumblefish, which charge a 25 percent admin rate off of the top.

Think outside the box here. You could use your own songs to do a tutorial lesson on bass, guitar, or vocals. You could break down one of your song's structures and boom – another video. Add an audio track to one of your songs, explaining the life moment behind its writing.

Probably the most important facet of lost musician revenue is the lack of a clean instrumental track. To effectively license music and make sure you have as many chances as possible for uses, make sure that you have an instrumental version (no vocals) and a "TV-up version" (just background vocals – "oohs" and "ahhs"), as well as a separate vocals-only track in addition to the final master mix of the song.

So, you have four "songs" now:

There are countless times when a song cannot be used because of a lyric here or there, or the vocal just doesn't hit the right emotion. Sometimes you can get the same money for 30 seconds of the bridge without vocals as you could for the whole song. This is imperative.

Shazam might be one of the most important drivers of the future of music. Industry insiders are watching these charts very closely – trust me.

To get your music onto the platform, first make sure you have a distribution service (like CD Baby, the Orchard, TuneCore, etc.) in place, then ask them to submit your music to the Shazam database. Once you're in Shazam's ecosystem, tag your own song and save it. Then, plan a "Shazam Party" by asking all of your fans to download Shazam (free), then play that song on their computer or stereo at a time (like Tuesday night at 7:00 p.m. EST), and all Shazam it at once. You'll hit the top of local charts and possibly larger ones. It will get you noticed and might lead to a larger licensing deal.

You know of PROs that collect for performance royalties, but they only do that for songwriting, publishing, and composition. SoundExchange administers the statutory license for satellite radio and web-casters. They collect for the recording owner and featured artist. Think about this way: Aretha Franklin didn't write "Respect," nor did she own the publishing or the master recording. But she is that song, plain and simple. So why shouldn't she be paid every time that song is played? Well, that's what SoundExchange does – only for satellite and web radio (non-interactive, like Pandora). No terrestrial radio (yet).