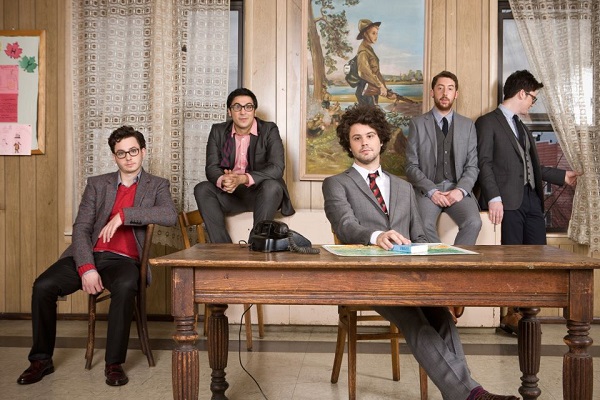 Pop is an increasingly diverse and far-ranging genre – so much so that it's almost like using the term "indie" to convey a band's sound. What do either of those descriptors even mean these days? We can probably all agree, at least, that pop is saved for the stickiest songs, the kind of catchy tunes you can't shake for days (not that you wanted to). Regardless of what's filtered in – be it psych, electronic, rock 'n' roll, or even classical – these labels all possess a predilection for pop. And luckily, all you melody-minded artists and bands, they all still welcome demos.

Best for: Electronic pop, dance pop, pop rock
Why we love it: Founded in 1999 by Les Savy Fav bassist Syd Butler, this New York imprint brought us albums from artists like Passion Pit, Bloc Party, and Local Natives. Rock- or electronic-inflected pop is more its style than the vocalist-focused variety, but that doesn't exclude it from being a reliable conduit for delivering irresistible hits.
How to submit: Two of your best songs via SoundCloud or similar service is what they're wanting to hear – and they claim to listen to all submissions, by the way. Read the rest of the specifics here.

Best for: Experimental pop, bedroom pop, electronic pop, new wave pop
Why we love it: It's released an eclectic mix of artists in its six-year history, and all of it's been alluring and interesting. Those at the helm are based in two different areas of France and in Montreal, so maybe that's part of the reason the kind of pop they're pushing feels universal yet fresh compared to a lot of labels in the States. It's not that they don't work with American artists – they do. It's just a broader, less NYC- or LA-minded perspective they're working with in the selection process.
How to submit: Demos can be emailed to via this page.

Best for: Pop with classical touches, orchestral pop, chamber pop, operatic pop
Why we love it: This New York label is one of very few catering to independent classical music, but its prowess in that niche is strong and far-reaching. Its composers and artists hail from all over – Russia, Brooklyn, Canada, Detroit, and more – but share the common element of classical inspirations. And, a good handful of them boast an equal penchant for pop, which makes for catchy hooks of the most gorgeous and sophisticated variety.
How to submit: While they stress that most of their dealings are a result of "person-to-person relationships" in the realm of classically trained musicians, they do accept outside inquiries. Read more here.

Best for: Fuzz pop, psych pop, electronic pop, experimental pop
Why we love it: This Oakland cassette and record label first emerged five years ago with a tape of spacey, psych-laced pop explorations by Velvet Davenport. Its successors have been just as fun and out-there, like the kraut- and new wave-tinged Leisure Birds and Doral and Devereux's odd instrumental soundscapes. None of it is so strange it's unlistenable, though. Melody remains paramount regardless of the many nuances the Moon Glyph artists incorporate.
How to submit: There's an address listed on the info page.

Best for: Electronic pop, dance pop, dance punk, synth pop
Why we love it: Since its start in 1998, it's had a hand in growing a sizable share of the latest wave of new indie pop icons – think the Yeah Yeah Yeahs, the Presets, Ladyhawke, Cut Copy, and Chromeo, to name a few. Originally founded by a Sydney music promoter, Steve Pavlovic, as part of EMI, it's now partly owned by Universal Music Australia. Not only does the label have the selection smarts, but also its major label association affords it a substantial leg-up in terms of distribution and reach.
How to submit: Email is their preferred method of contact.