5 Productivity Hacks That Will Make Your Band Rehearsals More Effective (And Enjoyable!) 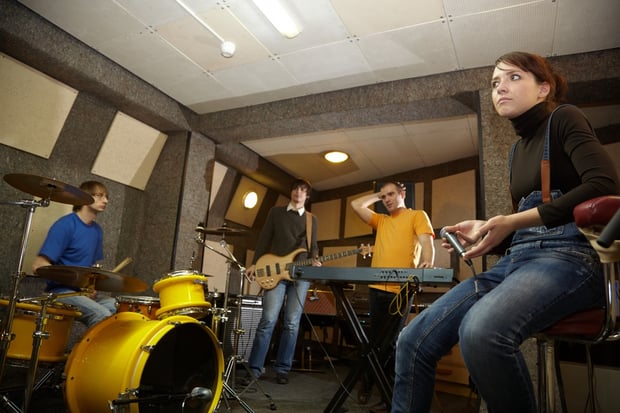 For any band, practice time is the most crucial time for shaping your sound. Yet most bands – even serious ones – don’t rehearse properly; it shouldn’t take a band three hours to get through two songs, but more often than not, that’s what happens.

The thing is, we’re all busy people, and most of us can’t devote an entire night to band practice, even if we want to. So in order to help make your band practices shorter, more productive, and more enjoyable, here are five productivity hacks for you to try out before, during, and after your next band practice.

Have you ever looked at your bandmates after an all-night practice and wondered, “Where did the time go? How is it that we’ve only played through four songs and now it’s time to wrap up?” Part of the issue is that playing music with other people is a really fun thing to do, and when we’re doing things we enjoy, we don’t notice how quickly time passes.

But while band rehearsal should be fun, it should also be productive. So if you want to get more done at your band rehearsals, assign one band member to take an “activity audit” of your next rehearsal. Get that person to watch the clock and write down how much time each activity takes up. You may be surprised to find out how little time you spend actually rehearsing and how much time you spend on other activities like setting up and tearing down gear, noodling on your instruments, talking about sandwiches, etc.

After conducting an activity audit, you can start to set goals as a band for how you’d like to better spend your time. Write down what you’d like a good band practice schedule to look like and assign someone to be your timekeeper. Get that person to set a timer on their phone for each section (setting up, warming up/jamming, discussing setlists, running songs, etc.) of the rehearsal so they can tell you when it’s time to move on to the next activity.

Part of staying on time also involves showing up on time, and that’s much easier to do if you schedule rehearsals during times that work well for everyone in the band. Instead of adding more time to each rehearsal by going over your schedules in person at the end of each rehearsal, use a smart online calendar like Doodle or Calendly that allows each person to mark off times when they’re available and unavailable. That way, you’ll be able to easily identify times when everyone is free, and you won’t have band members calling you all the time to reschedule because they forgot they had to work that night.

In the days of paper, keeping your sheet music properly organized was one of the best ways to save time during rehearsals. But this is the age of digital, and what kind of musician actually likes sorting and organizing papers anyway? These days, the best way to keep on top of your sheet music is to use an app like forScore that helps you organize your sheet music digitally. This app lets you create setlists, add comments, set up bookmarks, and can even turn the page for you while you play.

For guitar players, downloading a guitar tab app like Ultimate Guitar Tabs HD or Tab Builder is the easiest way to give you quick access to tabs for cover songs, or even write out tabs for your own songs.

5. Use a project management app

If you’re really serious about maximizing your band’s rehearsal productivity, the best thing you can do is to set up an all-in-one project management app that each band member can download.

There are apps like BandHelper that are specifically designed to help band members share information and stay organized. There are also workplace apps like Basecamp that are designed for similar purposes, and just because they’re not made specifically for musicians, that doesn’t mean they won’t work for you. Another great group organization tool is Planning Center Online – this app is actually designed for church worship teams, but again, there’s no reason you can’t use it for any other type of band.

While using project management apps or online schedulers may not sound very rock 'n' roll, keep in mind that the point of these productivity hacks is to save you time during rehearsal so you have more time to focus on actually playing music as a band. So while these methods might not all be sexy, they will help you sound better, and they should also lead to more enjoyable band rehearsals for everyone involved. Unless, of course, you actually want to spend your time noodling out guitar riffs and talking about sandwiches – in which case, by all means, just keep doing what you’re doing.