5 Signs That You Should Quit Your Band 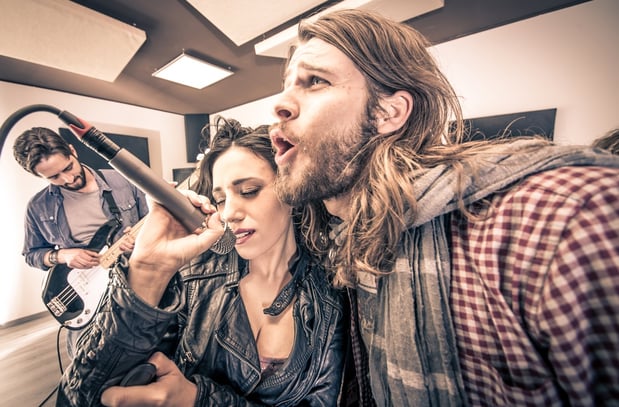 When you put your heart and soul into something for years and years, it can be hard to leave it behind. It can be even harder, however, to tell whether something's truly right for you after a certain point. The biggest reasons to be in a band are to find fulfillment from making music and to have a good time. If neither of those things are happening for you, then it could be possible that quitting the band will actually improve the rest of your life. Here are five signs that your band isn't right for you.

This is a factor that often goes overlooked. When you're not feeling connected to your band, it might not feel like anything is necessarily "wrong," but that doesn't mean that it's the right fit for you and something that's worth continuing.

Do you have trouble getting the motivation to practice your parts? Do you space out in the middle of rehearsals, even mid-song? Do you wish you were doing something else, perhaps something you consider to be more productive? Any of these things could be true even if you love the people in your group and genuinely enjoy playing with them and sharing their company. All it means is that you may be losing the satisfaction and fulfillment that playing with the group once offered you.

The truth is, if you aren't present and find yourself disconnected from your band and the music, it's time to move on. There will be something out there for you that's far more fulfilling. Your disconnected attitude also drags the attitude of the entire band down, even if it's only on a subconscious level.

It's possible that your bandmates could feel the same way as you. It would be best to sit and chat with the people in your group about it. If everybody else is still as excited about the group as they were on day one, then the fair thing to do would be to give your notice and take your leave, so they can find somebody fresh who wants to give 120 percent to the project.

2. There's too much internal drama

When you put a bunch of creative types into a group and make them work together, some sparks are sure to fly at some point or another. Disagreements are a natural part of any group endeavor. Some bands, however, struggle with this more than anything else.

Internal discord can really make the experience of being in a band a sour one. Are there people in your group who really don’t get along? Is there somebody, or even multiple people, who you're really having a hard time liking? Is it ruining the vibe for you?

Over the decades, there have been plenty of incredible musical groups that have released hit after hit despite the fact that they didn't get along. If you're having trouble putting up with the drama in your band, you need to evaluate the situation. Is all the tension worth the satisfaction that you get from the music itself? If it is, then you might want to stick around, at least until you can find something else that's satisfying and less tense. If the drama outweighs the fulfillment you feel from the music, then I'd say it's absolutely time to move on.

In order to feel satisfied, it's important that your musical and professional standards are being met.

Life can be crazy at times. Most busy musicians know all too well the perils that can come along with a hectic schedule. Oftentimes, the days are filled with a day job that pays the bills, while the nights and weekends are stuffed with rehearsals and performances. Some people have more on their plates than others, however, and that can make being in a band feel like a chore, rather than a release.

Life fluctuates, and there are times when there will be more going on than usual. If you’re struggling financially, it can be easy to find yourself with two or more jobs, a family, and a pet, in addition to the two bands that you're in. If you're finding yourself rapidly burning out to the point where you can't focus and aren't enjoying life, sometimes it's the wise move to put the bands aside for a time. There will always be another group to join, and if you aren't taking care of yourself, it could suck all of the joy out of music for you.

4. You have different musical goals than your bandmates

People start and join bands for a multitude of reasons. Some musicians take what they do extremely seriously and have every intention of doing whatever it takes to make sure that their band gets as far as it can possibly go. Others musicians play casually, and just want to have some fun gigging with their buddies. When these two very different mindsets meet, however, it often ends in unhappiness for one party.

Are you regularly upset with your lackadaisical band members who don't seem to have any ambition? Or maybe you're tired of the guys in your group pushing you around and ruining your vibe. It doesn't mean that your band, or the people in it, are crappy or weird. It just means that the band isn't a great fit for you.

In order to feel satisfied, it's important that your musical and professional standards are being met. If the rest of your band can't put themselves together well enough, or take things way more seriously than you like, you should consider leaving the group and letting them find somebody who would be a better fit for their personal goals.

5. You and your bandmates have conflicting life standards

When you first get involved with a group, it's important to discuss how much commitment they're looking for. This will help save everybody time and could prevent drama later on. If you're a 44-year-old with three pets and a family, it's probably not worth it for you to sacrifice your salary to go tour with a bunch of 20-year-olds. They're also probably not going to be excited about having to train somebody new from the ground up just for the sake of touring.

Ideally, you'll know where you stand in your life and be able to discuss this upon first talking with a new group. It's possible that your life situation can change rapidly once you're already in a group, however. As with many problems, this can be tended to using communication. Let the rest of the band know where you are in terms of commitment, and see if they would be willing to accommodate accordingly. If you find that life is just really preventing you from having a productive, fun time, or if the rest of the group is frustrated about you holding them back, then it's definitely time to let go and look for something more casual.

Have something to add? Let us know in the comments below.