5 Things You Should Never Say Onstage 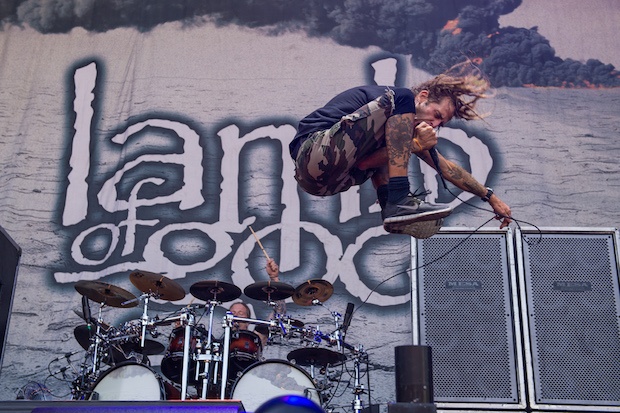 When Lamb of God played an opening set at a concert I attended, their rude attitude towards their fans made my experience less enjoyable. (Image by Stefan Brending via Wikimedia Commons / CC BY-SA 3.0)

The best rule of thumb is to be humble, grateful, and pleasant. Even if you aren't in a good mood, you better get good at faking it. Projecting your negative attitude onto the audience is going to bring their experience down, and nobody wants to have a bad time at a concert.

As a concert-goer, there are a few things that I've heard multiple bands say onstage that have made me feel pretty uncomfortable. Here are the five most common cringe-inducing remarks I've heard.

For a long time, I was in a band with a frontwoman who always felt the need to exclaim, "Hello, Seattle!" every single time we played in Seattle (our hometown). It drove me nuts. Unless you're trying to be cute or ironic, or only do it once in a blue moon, this is a phrase that should be avoided in your hometown. It's obnoxious to your fans and probably to your bandmates as well. Your fans want to feel the pride you have for your hometown; don't greet it like you would any other town on the road.

Never apologize for something related to your set while onstage. Even if it was a technical malfunction, or especially if it was something related to somebody's playing, an apology does nothing but drag the mood down. Most of the time, people in the audience either won't notice or won't mind a mistake. Making a big deal about it onstage just makes you look unprofessional.

If there really was a serious mishap (such as somebody getting injured) that you or your band were involved in, it would be much more appropriate to release an official apology statement immediately following the set's conclusion.

3. "We haven’t played this song in a long time, so it might sound bad."

Disclaimers are very similar to apologies. They don't really serve a purpose other than bringing the mood down and making you look unprofessional. (This could ring true in every aspect of life; I've heard people make disclaimers like this everywhere, even if it was in a context that was completely unrelated to music.) Don't lower people’s expectations of you. Let your music speak for itself, and if it isn't at a level where you are happy and confident, then don't play it! I can assure you that 99.9999 percent of the people who come out to see your band are there because they want to hear your music, not your excuses.

Using a guilt trip to get sales, views, or online followers is just awful. I've seen plenty of bands say the above at gigs, or vent frustrations on their social media accounts about lack of sales or attendance at their gigs. It's fine to be frustrated, but the energy that's spent whining to your fans would be much better spent brainstorming some new marketing strategies – or in the case of a concert, actually playing your music rather than moaning.

Most folks go to a concert because they want to have fun. As soon as you start trying to guilt people into buying your stuff, it sucks a lot of the fun out of the experience. And when your shows aren't fun, people stop coming to them.

Complaining sucks, especially when you do it onstage. As ridiculous as it may sound, I've heard bands get onstage and complain about all sorts of things throughout their set. Everything from the sound, the club, the number of people in the room, and the audience themselves can be turned into targets for a disgruntled band. This seems like a no-brainer, but I've born witness to it too many times not to mention.