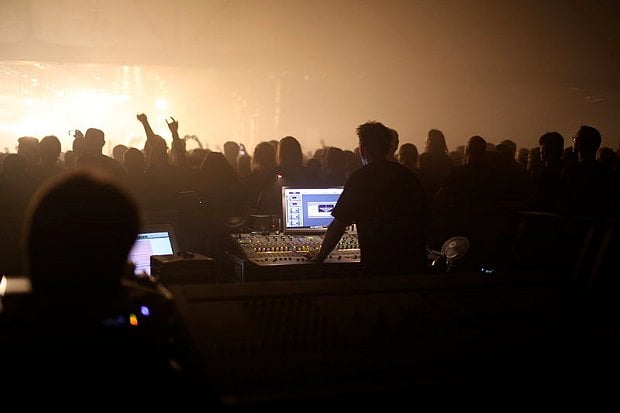 We’ve all been there: loading into a new venue for the first time with that feeling of excitement from playing a new space mixed with a nagging concern of not knowing exactly how things might pan out. Some of the anxiety probably stems from meeting the sound person; what will he or she be like? Half the battle of getting along with your new temporary bandmate is getting off on the right foot. Every situation is unique, of course, but here are eight universal pieces of advice that will always help you earn your sound tech's respect.

1. Show up early, and be ready to soundcheck when told

Pretend for a second that this is a job interview. You wouldn’t want to show up late and unprepared to an interview, so what makes a soundcheck any different? This is your time to meet your tech, communicate any issues or concerns you have, and give him or her a chance to hear you and learn what to expect. It’s a sort of first date, if you will, and can really set the tone for your performance and your future interactions with the sound tech. As the saying goes, you don’t get a second chance to make a first impression.

2. Treat house gear like it’s your gear regardless of its condition

Unless you punish your own gear with wanton disregard for its well-being on a regular basis, pretend the venue's backline and gear is yours. Just because it’s there for you to use, doesn’t mean it’s there for you to abuse. In some cases, it may be the sound tech’s personal gear, so unless you want to see an ornery mama bear at front-of-house, give the gear some respect.

3. Don’t complain about the house gear

Depending on the venue, you may be provided with some pretty well-loved backline and mics. Unless you’re at the point in your career where your shows are advanced with a rigorous tech rider, assume you probably won’t have access to your favorite type of vocal mic if you don't plan on bringing it yourself (which isn't a bad idea – you probably wouldn’t share a spoon with a stranger, and mics aren’t really that different). I’m not saying there aren’t some supremely sad-looking backlines out there, but there are few better ways to get labeled a prima donna than having strong opinions on what’s provided. If you have favorite mics or DIs, bring them yourself and arrange their use with the sound tech ahead of time.

4. Never, ever ask your audience, "How does it sound?"

If you’re mixing your own sound from the stage, that’s one thing; there’s no possible way for you, personally, to know how it sounds in the house. If you have someone mixing for you, however, polling the audience for sound advice is a surefire way to get the quality of your mix put on the back burner. Few things can be done to undermine and disrespect the authority of your sound tech quicker than those few words. How it sounds is his or her department; let that person own it. Unsolicited advice about the mix in the house, especially from the stage, is almost always a bad idea.

5. Listen when the sound tech gives you the infamous "last song" cue

No matter what kind of night you’re having, when you’re told it’s your last song, it’s your last song. In many venues, the sound tech functions as the stage manager as well. Therefore, set times and changeovers usually fall under his or her jurisdiction. Don't villainize the tech for telling you to wrap it up, or worse, ignore him or her. You'll almost certainly be finishing your last set at that venue – period – if you decide to play on.

6. Thank your sound tech at the end of your set on the mic by name

This often gets overlooked, but this little shout-out can go miles as far as setting the stage for a return visit and future relationships. The audio world is smaller than you think, and techs talk. It probably won't take long to get known as "that band that's great/easy to work with," or "a mess." The choice is yours.

7. Don’t bad-mouth the venue to the sound tech

Again, your sound tech can be the quickest way to get good or bad feedback about a venue to the management. Imagine walking into someone’s house for the first time; you don’t instantly point out the things you find wrong with it to the owner. Assume that anything you say to the sound tech may be taken personally or will make its way back to the people who run the venue. On the flipside...

8. Don’t bad-mouth the sound tech to the venue

I’m not suggesting that venues, their management, and their sound techs are infallible, just that there are appropriate channels for handling your concerns and issues. Smack-talking one to the other in the heat of the moment is probably the worst channel imaginable. Immediate issues obviously need to be handled directly with the party in question, but leave the drama on the playground, and be professional about it. All these people usually talk to each other and probably have a closer working relationship than you realize, and if you want to be booked again, having one or all of them on your side will only help you.

These few things can make a big difference in promoting your relationship and take almost no effort to put into practice. A lot of it is common sense and respect, but in a field where you learn to expect the unexpected, sometimes even experiencing the biggest no-brainers is refreshing.