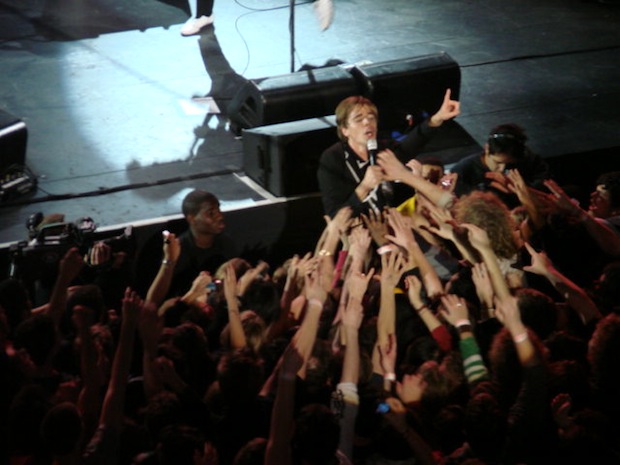 The Hives. (Image via wikipedia.org)

As a music journalist-turned-music publicist for over six years, I've been to my fair share of album release shows. Some of them blew me away. Others, not so much. But this is your big moment, and your audience should always be left in awe! When I walk into an album release show, I'll admit my expectations are higher than normal. I expect to see a transfixed crowd, fueled by a passionate band. I expect exclusive merch, and an energy level that's through the roof. And when I walk out of an album release, I expect to have that album in hand and a reignited love and respect for the band celebrating their release. All of these things are not only achievable, but crucial. Because let's face it, if you can't be bothered to pull out all the stops for your CD release, what's a regular show of yours going to be like?

From the eyes of a blogger, publicist, and most importantly, a fan, here are my six essentials for a successful independent album release show.

This one should be a no-brainer, but you'd be surprised at how often I've seen an album release show that's made up of friends of the bands, rather than artists that actually make sense for the occasion. Now, there's nothing wrong with playing with your friends (please don't be one of those bands that only ever plays with the same three bands on rotation), but for your CD release, you should pick bands that complement your sound and will help amp up the energy for your big moment.

2. Give the audience not just a show, but an experience

This is my personal number one. I fully believe the reason EDM has risen in the last few years, and even infiltrated otherwise EDM-free festivals, is because of the experience it provides. When you go to an EDM show, you're not just going to a concert, singing along, and going home. You're basically having a party with everyone you do and don't know for one blissful hour of unity. It's a full-out experience every single time. As an up-and-coming band, you might not have the budget to go all out with a wild light show, or having fireworks go off after your set ends (though that would be pretty cool). But you can still get creative with your approach, and make it a show to remember. Playing around Halloween? Spend a little extra to have your fans go through some kind of haunted house or hayride onsite before entering the show. Maybe you charge an extra $5 for the admission ticket, but you better believe they'll remember that kind of entrance. Party band? Rent out a bus and have fans that purchase a VIP ticket come on the bus for an exclusive after-party. It just takes a little creativity and you're bound to stand out.

3. Hand out something for coming

Everyone loves free things, even if they're not really free. Throw in a koozie, some stickers, a postcard, a download card, etc. with the price of admission, and your fans are sure to appreciate it – not to mention they'll become a walking billboard when they use that koozie or put that button on their bag. This is a celebration, after all, so why not celebrate the people who support you most with a little something extra?

This one can be tricky, because you don't want to go so crazy with the exclusive merch that after the show it's no longer relevant, but offering a one time only, limited run of exclusive merch is a great way to make fans that were there feel included. On their final tour, Anberlin offered T-shirts with that individual city's name exclusively to fans who attended their show. You couldn't buy them anywhere else. To me, that kind of marketing is essential to building a feeling of community around your fans. It doesn't have to be anything too big. It can be a button, a patch, or a postcard. But don't be afraid to get creative with your merch either. Think outside the box, and appeal to your specific crowd, message, and ethos.

5. Use social media to promote, but don't rely on it

Social media is still one of the most powerful ways to reach people, but it isn't the only way. While there are some tried-and-true tactics you should impart on social media, such as promo videos for the event and release, a daily countdown on your Facebook and Twitter header, offering downloads, posting in your city's subreddit, etc, you should never underestimate the power of word of mouth. Pounding the pavement, distributing flyers in local cafes, record shops, music schools, and venues are just some of the many ways to get the word out there. Tell everyone you know (but don't be obnoxious about it), including bands, and you'll be surprised how quickly you'll fill that venue.

6. Grab people's attention before the show even starts

If you're uncomfortable making a fool of yourself, this one isn't for you. If you're keen on grabbing the attention of future fans (and everyone else), read on.

Some of the most memorable experiences I have in life are of goofy people dressed up as mascots or in some crazy costume beckoning me with flyers and coupons. But surprisingly, I've never seen this tactic used for bands, at least locally. Why not dress up in something crazy and distribute flyers, play your music on the subway (check for permits!), and pass out stickers, flyers, and other goodies for your show? Why not rent a mini-bus or some crazy old-fashioned car to drive around your city and distribute merch or hold a pre-show listening party on? Once again, go for the full-out experience even before you've set foot on the stage. Trust me, you'll never regret giving it everything you've got. You've spent a lot of time, money, and energy on this album, and your passion is evident. So make sure that passion shines through on release day. You've come this far – don't drop the ball just as you're meant to celebrate!

Learn more about releasing an album:

Angela Mastrogiacomo is the owner of Muddy Paw Public Relations. Muddy Paw specializes in working with up and coming artists on personalized campaigns designed to bring their careers to the next level. To date, we’ve secured placements on sites such as AbsolutePunk, Substream, Property Of Zack, PureVolume, Anti-Music, and many more. You can find us at www.MuddyPawPR.com.