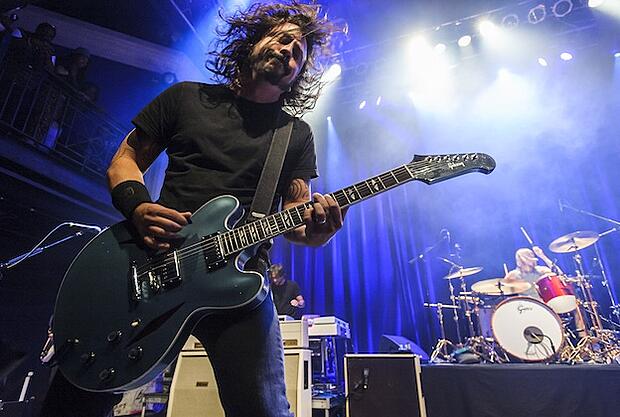 Take a cue from Foo Fighters when it comes to promoting your new album. (Photo by Kyle Gustafson)

Paradoxically, the internet has made it much easier to reach your followers but much harder to get their attention. Turns out that when everyone's shouting equally loudly, no one gets heard. This is especially a problem for indie music creators with no label money backing their marketing efforts. Social media's nice and all, but in order to stand out, sometimes you just need to find more creative ways to market yourself. Try one (or all!) of these four out-of-the-box promotional ideas for your next album release.

1. Throw yourself into the pit of the internet

One way to market outside the box while still at home is to explore new frontiers on the internet. Too many musicians stay confined to social media channels where their fans already are. This is a huge mistake – get out there, find forums where you can post your work to be ripped apart by amateur critics, and even consider doing a Reddit AMA.

When sharing your music on forums, make sure that you first actively participate in the communities, comment on other peoples' music, and contribute to discussions. If you don't and you only promote your music, you'll be labeled a spammer and banned posthaste. Some forums that like to hear from indie musicians include taxi.com, ultimate-guitar.com, and bandamp.com. For electronic musicians, KVRaudio.com, muffwiggler.com, and VI-control.com might be more up your alley. Speaking of Reddit, /r/music also accepts self-promotional posts on Fridays.

Finally, after the release, you should give some serious thought to posting your master tracks online and encouraging people to remix and sample your music. (With credit, of course.) Even people using bits of your vocals or drum patterns in other compositions can greatly increase your profile.

Many artists and bands, most famously Foo Fighters, have held contests where the prize is that they come to a fan's house or other venue of their choice and play for them. These have always dramatically improved audience engagement in general, done a lot to improve those artists' reputations, and gotten a lot of people talking about musicians who otherwise might not have been on their radar at all. (If you do this, though, you should probably keep the contest local.)

[Learn more: How to Run a Proper Social Media Contest Your Fans Will Love]

Some artists have also built a following by starting blogs and promising to release a song, or some other related piece of free content, at least once a week. I'm not talking about stuff you've already made – this is more like things that you make on a week-to-week basis specifically for the giveaway. This, admittedly, is only for the most dedicated, though.

Finally, for those of you who want to give something away without going so over-the-top, why not try contacting a local record store or coffee shop and asking if you can play a free show for customers?

One gift few people are willing to refuse, especially among the tech-savvy crowd that’s most likely to download albums, is a free USB drive. Everyone's happy to receive one if it can be reused. So if you have a bit of a promotion budget to work with, you can buy cheap, low-capacity flash drives, put your album on them, and give them away at college events. (College students in particular need the storage.)

This approach's greatest benefit is also its worst flaw, however – your album can be easily erased by someone who isn't interested in it. So you have to make sure to only give them out to people who've expressed a genuine prior interest in the band.

[Learn more: 3 Simple Steps to Releasing Your Album on USB]

Guerrilla marketing involves such tactics as sticker bombing, posting handbills, and so on to get your message in front of more eyeballs than your budget will allow.

An anonymous singer made duplicates of Starbucks’ Song of the Day rewards cards, except they replaced that song with one of their own, then covertly slipped the cards into the box every time they went there for coffee. This, while very creative, might be breaking some kind of law, so we can't endorse this really cool crime. However, it still serves as an awesome reminder that there's so much you can potentially do to get creative with your music promotion.

Another idea: why not get out your roll of tape and stick some posters up in neighborhoods that house the kind of people you've determined to be your target audience? If you're going to do flyers, make sure to do a test run before you print a full batch: hand them out in one location, and see what people do with them. If too many of them are ending up in the trash, revise your strategy, poster design, or target audience.

You can even play guerilla shows: show up before or after another concert (make sure it's of the same or a compatible genre), play a song or two, plug your album, and pass out some flyers, then scoot before any authorities notice. This is especially easy if you're an acoustic band.

[Learn more: How to Leverage Your Favorite Band’s Fans by Creating Your Own ‘Aftershow’]

And finally, for those of you who aren't afraid of criticism, you can always make like Cake and ask random people on the street to listen to your album. You might even get a video for your site out of it.

The most important quality in any of these is patience. Even if your methods for promotion are unorthodox, they still need to be structured. This will keep you from falling prey to Shiny New Idea Syndrome, an ailment that causes the afflicted to chase every promotional strategy that sounds like a good idea, then abandon it if it doesn't draw results within some unreasonable amount of time.

What unique ways have you used to promote your new releases? Share with us in the comments!

C.S. Jones is a freelance writer, photographer, and artist. He frequently covers music, visual art, scenes, and culture in general. He's not that great of a musician, but he knows a lot about the music industry and really wants to help.