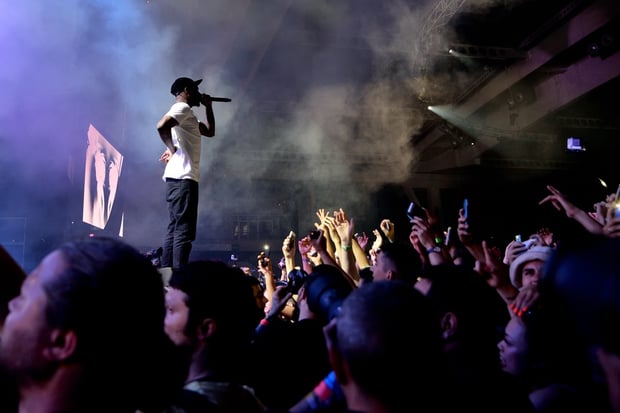 If you throw a rock out of your window, there’s a good chance you’ll hit someone who claims to be a hip-hop artist. In such a crowded genre, one of the best ways to make a name for yourself is by having a memorable live show. But what actually makes for a memorable live show? Follow these six steps, and you’ll be well on your way.

1. Maintain some level of sobriety

I know you’re probably not going to be drinking water all night long, but limit your alcohol intake, especially before you hit the stage. It’s fine to have a drink with your buddies, but save any heavy drinking for later in the night, or, best case scenario, another night altogether.

As an emcee, your words are the most important aspect of your work. If you’re slurring those words, not only will your message not get across in the way you want it to, but there’s a good chance everyone will leave the venue thinking you’re both a terrible performer and a terrible emcee.

Here’s an example of what happens at a lot of hip-hop shows: a rapper spits a verse, he isn’t happy with the sound, he tells the sound engineer to turn up the mic, with the mic turned up the rapper becomes even less understandable, so he demands his mic be turned up even more. The result is garbled noise for the rest of the show, and none of it is the sound engineer's fault. The problem is with the rapper, and the way the mic is being held.

Everyone reading this has likely held numerous mics, but the issue in hip-hop is that many artists grip the mic by the head, sometimes covering the vast majority of it with their hand. When this is done, it becomes impossible to be heard correctly, and no amount of turning up the mic is going to help. In fact, it’s only going to make things worse, because what’s being turned up is the sound of your hand covering the mic, and the shouting of your lyrics through your hand. What the crowd ends up hearing is something akin to Miss Othmar from the Peanuts comics. Wah wah, wah wah wah wah wah.

One of my favorite live performers, Tah Phrum Duh Bush, has an entire song about the proper way to use a microphone, entitled “Micro-P-H-One-01.”

You know the old adage that you should dress for success? It holds true even in hip-hop. I’m not saying you need to put on a power suit like you’re going to a job interview with a Fortune 500 company, but you should pick out some shirts, jeans, hats, etc. that will be your performance clothes. If your wardrobe is limited and that’s not an option, at least put on a clean shirt.

When artists appear onstage looking like they just rolled in off the street, the image they’re giving off is that what they’re about to do isn’t all that important to them. The audience will see this and react accordingly to the performance.

A typical indie hip-hop show is, for lack of a better term, a sausage fest. We’d all love for more women to be there, but is it really any surprise they don’t feel welcome? For as much as we praise underground hip-hop for being an alternative to the mainstream, there’s a lot of machismo in the lyrics, women still aren’t necessarily referred to in the best of ways, and the plethora of songs about hating the mainstream and/or the music industry aren’t exactly the perfect soundtrack for a fun night out.

One of the reasons all the mainstream pop-rappers have such huge audiences is because they make an effort to reach out to women. I’m not saying you have to go out there and emulate Pitbull, but if you know how to talk to women at all (in a non-sexual way), reaching out to them shouldn’t be all that difficult. Heck, you have female fans already – just ask them what they want out of a hip-hop show. Their answers are the perfect starting point.

5. Hang out with your fans

Even if you’re one of a dozen artists on the bill, at least a few of the people in the venue are there specifically to see you. Hang out with them! Ask them how their night is going. Thank them for coming. Tell them you have something special planned and you’re glad they’re here to see it.

Oh, and for all those people who are there to see the other artists? Talk to them, too! Introduce yourself. Thank them for coming. Tell them you hope they have a good time, and that if they enjoy the show to let you know later at your merch table. The latter works twofold, as it gets people to pay attention to your performance and potentially pick up an album.

6. Have something to autograph

I’ve always loved getting autographs on CDs. I know there are some artists who don’t want to press up CDs, and while you can opt for download cards, make sure you have something else you can autograph. I’ve seen plenty of artists print up posters or mini posters to sign and give away (or sign and give away with any purchase). Give people something to remember you by, something they can look at day in and day out, that will influence them to not just see you again, but to bring even more friends the next time around.

Hip-hop artist or not, try these tips to make your next live show a smashing success: