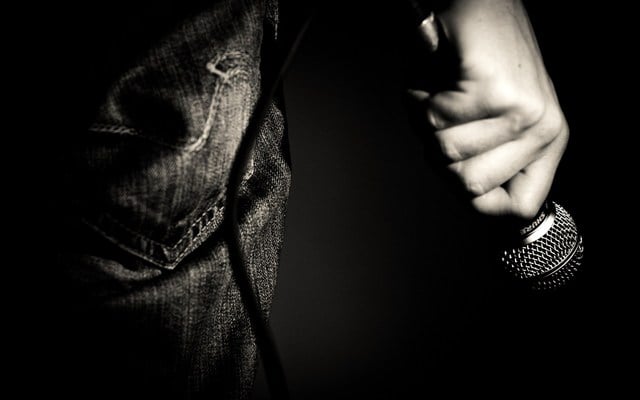 This is the first installment in a series of articles tackling live sound issues that we all run into, or may think we know the answer to, but oftentimes are muddied with myths or misconceptions. So, without further ado, a quick guide to vocal mic technique!

Microphones are effectively the most common tool of the trade for musicians, and yet somehow the proper handling of these tools seems to elude many. There's actually a lot more to effective mic usage than just grabbing it and pointing it at your face. If you're an instrumentalist and your mic will be placed on a stand, the first aspect of mic handling is taken care of for you. If you're a vocalist, the first challenge to address is how to actually hold your microphone. At this point, you may already be checking out on me, but if I had a dollar for every vocalist I've seen hold a mic wrong, I would be writing this column from my personal island off the coast of Dubai.

How and where should you hold your mic?

Take two things into consideration: how you hold the body of the mic and where you hold it. If you hold your mic with a loose grip, allowing it to move around freely, or constantly adjust your hand placement, you're going to get a lot of handling noise. Some mics have capsules designed specifically to help with this, but no matter how good the shock mount for the element is, if you play patty-cake with the body of the mic, you're going to get noise. Don't know what I'm referring to? Next time you have a mic set up in a quiet environment or before soundcheck, simply rub the body of the mic or pass it back and forth from hand to hand – and trust me, that noise does come through the house.

After ruling out a noodle-like grip, another amateur move when using a microphone is not holding it in the right place. The stick-like design of most microphones is not a coincidence; if it were an ice cream cone you would grab it by the cone, not the ice cream.

Congratulations, you're now picking up all of the noise you were trying to avoid. This is one of the reasons why, when a mic gets cupped, there are almost immediate feedback issues. I'm not saying you can’t have swagger and style while onstage using your mic – there’s no reason you need to look like you're in a hotel ballroom discussing the benefits of a timeshare – but I will ask that you keep your hands off the grille. I also know at this point someone will probably feel the need to try and defend the mic-cupping camp as a valid technique (psycho-acoustically perceived volume and frequency response changes, etc.) but all of these so-called "benefits" are usually combating issues you've actually created by messing with your sound tech's gain structure and mic response. And you wonder why he or she is angry?

How far from your mouth should the mic be, and at what angle?

Lastly, how far away you hold the mic and the angle at which you hold it can make a world of difference. Since we're all like snowflakes and no two people or voices are the same, most techs will agree that being as close to the microphone without physically putting it into your mouth is a good starting point. There’s a window of a couple inches that will usually lead to the best vocal sound in a live setting; you shouldn't be mic'ing your belly button, so holding it a foot away from your face is doing no one any good.

Consistency in distance is the next key element. Though some singers really have quite a dynamic range, with a well-dialed-in vocal chain and an attentive sound tech, very little adjustment of the mic placement should actually happen. Most of the mic-waving is good only for theatrical purposes. The best thing you can do is keep your mouth in relatively the same spot as you perform, since, depending on the mic, the difference in timbre and volume as you move relative to the capsule can be astonishing.

Also, the angle at which you sing into the mic plays a big role in your sound. You may find you're having issues with certain plosives (P’s and B’s particularly) when addressing a mic directly into the capsule. Changing the angle by as little 20 or 30 degrees so you're singing across the capsule instead of into it can eliminate that issue altogether. At the end of the day, consistency will be your best friend, and your sound tech will love you for it. Trying to keep a consistent vocal sound while the vocalist is constantly moving or changing any one of these parameters is like trying to complete an algebra equation in which the variables constantly change. It's impossible.

As I said before, all voices are different, so what may work for you may not work for the next person and vice versa. The best solution is to practice with a mic, practice often, and find what works best for you. The mic is as much a part of your instrument as a bow is to a violin. Using the guidelines above and a little experimentation, you should be well on your way to pleasing not only your sound tech, but also getting the best possible sound you can on any stage with any sound system.