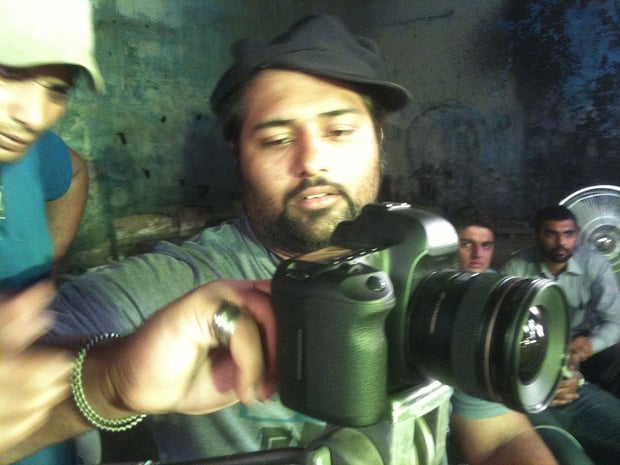 This article originally appeared on The DIY Musician Blog.

If you’re like most DIY musicians, there’s probably not a whole lot of extra cash left in the band’s bank account after shelling out for recording, mixing, mastering, duplication, registering your copyrights, and distribution. But you still have to promote your new record, right?

These days a music video is practically required in order to properly promote an album. And while, yes, you could spend thousands or even tens of thousands of dollars shooting a music video, why would you? Especially when you’re at a place in your music career where every dollar counts.

Last week, KCRW (home of the fantastic Morning Becomes Eclectic radio show) premiered the music video for my song "Anonymous." It’s a video I made for zero dollars in about two days.

It’s no "November Rain" or "Thriller," but for a video with zero special effects, a crew of one, no budget, and just a few hours to shoot, I’m happy with what we ended up with. Regardless of what you think of the video, though, I think I can share a few lessons that will come in handy when you’re brainstorming ideas for your next low- or no-budget music video production.

Note: if you’re working with other people to create your video, all the following tips will probably be helpful. If you’re working on your music video all alone, you can obviously take as long as you need to complete it, and be as elaborate as possible with your production. I’m thinking, for instance, of this video by my friends Rob and Naomi, which took them hundreds of hours to create on their own terms and timeline.

My friend Craig is a filmmaker, so he was an obvious choice to ask for help. He ended up directing, shooting, and editing the video. But even if you don’t have a friend with film equipment or skills, you probably have a smartphone, right? And maybe you can get some friends to bring their smartphones too (which gives you multiple camera angles to cut between when you edit).

Also, if you need actors or extras who’ll work for free, call your friends. I had two of my friends (Doug and Anna of the graphic design team Chicken 3000) show up later in the shoot to play the part of the two mysterious "watchers."

If you need a crowd, that’s doable too. If I remember correctly, folk songwriter Putnam Smith put out the call via social media to get people who owned cast iron pans to appear in the last scene of his music video. Or you could even hold a kind of contest for your fans to appear in one of your videos.

Here’s the thing about relying on free/cheap help: you want to be very respectful of everyone’s time. A friend might love to hang out for a few hours on a Saturday afternoon, drink some beer, and do a dozen takes or so, but if the shoot drags on too long or if you have to call people back on a separate day, it might start to feel like you’re taking advantage of their time. So don’t.

Whatever concept you come up with for your video, make sure it can be shot quickly, preferably in four to six hours on a single day (including setup and breakdown).

3. Shoot in one location, and make it count

I know you have a dozen elaborate sets in your mind, plus a concluding helicopter shot of you at the top of the Eiffel Tower. But yeah, that’s not gonna happen.

You have a lot to worry about already, especially if you’re going to be the main person on camera. Make the production as simple as possible for yourself, for the person worried about lighting and focus, and for anyone else who shows up to help.

Location, location, location! Find an interesting spot (and don’t ignore places in your local region that might have a ton of character), get everyone together, and put all your energy towards making the thing happen – not driving around, coordinating arrivals, etc.

Also, don’t be afraid to ask for access to locations that might seem out of reach: a monument, museum, etc. You might be surprised by how excited some facility manager or program director gets about the prospect of an artist shooting a video at their location.

4. Come up with one interesting visual element that can carry the whole video

I knew we didn’t have time to alter the environment, add a bunch of props, or have special effects, so that meant I needed one motif that wouldn’t get dull even if I had to repeat it a bunch of times.

So throughout this video I defy gravity, rising up out of the pool again and again and again while lip-syncing the song. To do this, I needed to memorize my song backwards and shoot everything in reverse (more on that process in the video below).

Maybe for you, the visual motif is dancing, or slowly getting your face painted, or wearing a ridiculous costume. The idea is to find one thing that works and center the video around that concept. Without this kind of thematic through-line, you might find yourself grasping at straws on the day of the shoot.

5. Keep the pressure on yourself

Both the marvelous and frustrating part of doing things yourself is that you have to follow through because the entire burden is on you. Volunteers might disappoint you or they might kick ass, but that’s a big gamble when you only have a few hours to make a video.

In my case, someone needed to sing the song backwards on repeat while falling into a pool. That’s not the type of thing I can rely on a volunteer for, so obviously the responsibility fell to me. Which at the very least meant that if the video sucked, I couldn’t blame anyone but myself.

I think that unless you’re sure that the other people involved in the production are really committed and willing to put in dozens of hours, it’s probably a good idea to handle the heavy-lifting yourself in terms of acting, stunts, or anything else that requires a lot of preparation. Which brings us to…

If your band members are going to choreograph a dance routine involving treadmills for your video, well, you better practice, practice, practice. Need a couple dozen stuffed cats for your set? Start gathering those furballs early. The shoot will be a disaster if you aren’t prepared to execute the concept.

For me it meant reversing the audio of my track, taking phonetic dictation of the lyrics, figuring out how to mouth those sounds in a believable way, and then memorizing it all. It was tedious, but ultimately I showed up ready to go. When everyone is prepared, you can really focus your energy and get the best out of everyone involved.

Be ready to edit the video yourself

I was lucky that Craig had the time and interest to edit the footage, but he was also very busy around then, and I was prepared to take the footage and edit it myself if he got swamped with other commitments. Of course, that means you’ll need iMovie, FCPX, or some other consumer editing program. But it’s probably a good idea to familiarize yourself with video editing anyway.

Things can change along the way, of course, but it’s a good idea to iron out everyone’s responsibilities ahead of time: who’s editing, who’s bringing snacks, who’s in charge of wardrobe, etc.

Take stills during the shoot to share on social media. Capture some extra footage for a behind-the-scenes video. And when the final video is ready, do all the usual things: email your fans, promote on social, tease it on Instagram, and mention it at shows. For extra points, do a blog premiere or host a live-premiere event.

Get more tips for making an awesome music video: