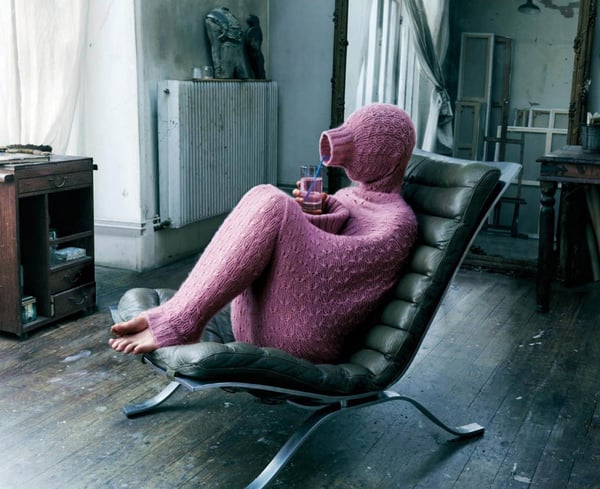 If the idea of networking makes you want to do this, try these helpful tips for better luck. (Image via theconfidencelounge.com)

If you identify as an introvert, it's likely that social situations – particularly those involving unfamiliar faces – make you uncomfortable. Networking in person as a DIY musician who belongs in that camp, then, can be pretty daunting. But it doesn't have to be.

Making in-person connections with venue owners, booking agents, promoters, and other musicians is key to the growth of your career. Sometimes the setting is obvious, like an industry meetup. More often, though, the opportunities to meet people who might one day help your band happen at shows, festivals, parties, and other scenarios not specifically intended for networking – and that can make approaching someone even more frightening.

It might help to remember that you're not alone; making these connections doesn't come easy for everyone. Even extroverts struggle – that personality type doesn't necessarily indicate that they're flawless in networking. (And sometimes being exceptionally outgoing can actually grate on others, rather than engage them.) Accept that it's okay to be an introvert, and know that you can still make connections despite your trepidations – especially with the help of these seven tips.

For musicians just beginning to make connections, finding someone to help make those introductions can help. If you don't know a single person who qualifies, consider friends who've networked in other industries. While the arena is different, the goals are the same: to meet people who you could potentially work with in the future. Regardless of the field someone is in, if he or she has networked before, that person might be able to give you pointers or at least serve as a buffer if you start to fumble.

2. Aim for one-on-one or small groups

If you're like me, then the bigger the group, the quieter your voice. (Silent, even.) I feel more confident when there are three or fewer people involved – maybe you will, too. Try approaching people when they're not already engaged with several other people.

Don't follow the previous tip so strictly that you barrage someone as they're alone waiting for or leaving the bathroom. That's just awkward. If you're aware that your timing is poor but you go for it anyway, you'll likely escalate your nervousness. Don't interrupt a conversation, for one, and try to avoid startling someone by approaching them from behind. Wait until they're not engaged with anybody else, then walk up casually to introduce yourself.

The way in which you express your intentions – and what those are to begin with – is important. People in the independent music realm are used to folks asking for favors, so it's going to be pretty obvious to them when you're doing the same. Try establishing a relationship before asking about opportunities for your band. It'll make you more comfortable, and the person you're asking won't feel so used. They often benefit from making connections too, of course, but these are people – not just steps on a ladder. (We hope both parties remember to see things this way.)

Going into a networking situation with high expectations can make you feel like everything's at stake, and the resulting nerves can crush you. The truth is that you won't get results every time, much less from every conversation. Make your goal to get a few people to remember your name, and consider yourself very lucky if an actual working relationship is formed right away.

I'm serious. If you've gone through the motions beforehand, it'll help you when the real thing happens. Start by introducing yourself, then keep things going with something like these suggestions:

7. Practice talking to new people in other settings

You can brush up on your networking by extending the practice to all types of situations. When you're not really aiming to make a connection, you're really just being friendly, and people usually respond well to that. Growing your confidence by talking to new people in general will definitely make you feel more secure as you work on making connections in the industry.