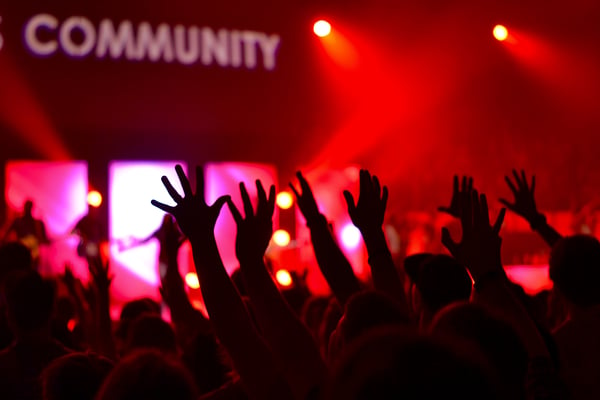 Photo by William White via unsplash.com)

If you're squeamish about networking, it could be a misunderstanding of the term that's fostering your worries. The practice is often seen as selfish ladder climbing, and even though that notion stems from corporate environments, the stereotype is pervasive. While personal gain is certainly a goal, real networking is about working together. And in the independent music world, collaborating is especially crucial.

We call it DIY, as in do-it-yourself – but, as Alex White of Chicago garage duo White Mystery has pointed out, do-it-together is a far more fitting descriptor for what being part of that community is ideally like. Genuine networking is right in line with that: It's about cultivating the relationships necessary for mutual help and working as a team. A degree of self-interest is inherent, sure, but it's not supposed to be wholly self-serving.

To better clarify what qualifies as good or bad networking, check out these hypothetical situations. We've explained each categorization after the scenario description; we bet you can correctly guess where they fall on your own. (And if so, then you've probably known the right way to network all along. Trust your instincts and get in there!)

1. You want to connect with a fellow (but bigger) local band at their show

Scenario: After said group finishes the set, you spot a member at the bar. He's talking to someone, but you don't want to miss your chance, so you interrupt: "Great set! I'm in a band, and we'd love to play a show with you."

Good or bad? Interrupting someone is pretty much always a bad idea. Wait until the member is actually available to talk before approaching.

2. You're making a compilation album

Scenario: You want to round up bands and artists you're into for a comp (that you also contribute to) to build relationships. Even if just a digital release, there's strength in numbers. Really, everyone loves a solid collection of sounds, whether focused on a single local scene, a specific style, or some other association. In reaching out to each band or artist about participation, you'll cultivate your relationship with them. (This is a counter option to Scenario 1. You can definitely make first connections with bands this way.)

Good or bad? Obviously, this is good. It's also inexpensive, assuming you go the digital route. And it's got legs: After the comp's started to make the rounds, you could organize an event in celebration where several featured bands perform. You could even start a series of comps or a series of shows.

Note: There are myriad collaborative projects to dream up. Zines, benefit shows, one-day fests, split releases, guest appearances in videos, etc. This is just one suggestion.

3. A local music writer with whom you want to connect is in the same place as you

Scenario: The writer isn't actively engaged in conversation, so you approach: "Hey, aren't you that writer? My band has a new album coming out soon."

Good or bad? Was the writer literally writing? Was she sitting down at a laptop? Holding a notebook and pen? No? Then it's a safe bet that she's not technically working and might be trying to simply enjoy the show, bar, outdoor festival, or wherever you both may be. Instead of invading her chill time with a press request, try interacting like a regular person. The fact that you're in a band will probably come up in conversation on its own. If it doesn't, you can try following up a few days later with a reintroduction, a bit about your band, and an invite to your next show – assuming the writer in question responded positively to your attempt at making her acquaintance.

Note: This one works for booking agents and label owners, too!

4. You want to connect with a band after their show

Scenario: It's Scenario 1 all over again, and this is another (better) alternative plan for establishing a relationship with a fellow band. Don't talk about yourself at all. When a band member seems available (use your best judgment), you congratulate him on a great set.You ask when his next show is. You buy some merch. You leave him be, unless the situation calls for continued interaction.

Good or bad? This is the right way to befriend a band. Post about them on social media. Tell a friend. If you actually support them, you're more likely to build a real relationship. Plus, like we mentioned in the music writer scenario, your band could find its way into conversation organically. Don't force it. Be a fan first.

5. You want to meet a booking agent in your local scene, and your only means is online

Scenario: You don't know this person, but you know of her – and her Facebook page. You send a friend request, then a message with an introduction, rundown, and links. A week passes and she hasn't answered. You message again: "Hi, following up on this."

Good or bad? This may all seem well meaning, but it's actually wrong from the get-go. Instead of messaging on Facebook or any other social media platform, check for an email address. Try that first – most booking agents, writers, venue owners, and other industry folks prefer it. If there's no email address listed, try asking around before you message. In the last-resort situation that you do message the booking agent, start by asking if it's okay to talk work there, or if she would rather you email or call instead. (And don't follow up repeatedly if you don't get an answer. If it didn't work the first two times, it won't work the next several, either.)

Note: This one can be applied to music writers, venue owners, and anyone else in your local music scene who you aren't able to first meet in person.