How to Make a Track Sound 'Warm' and 5 Other Confusing Audio Terms, Explained 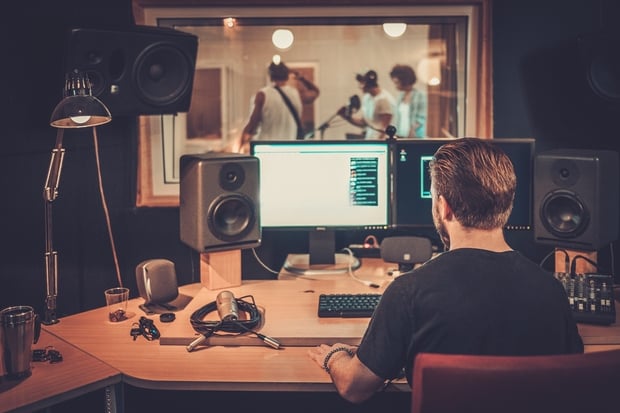 Describing sounds is a difficult thing to do. While we have plenty of common terms we use to describe what we see (bright, dark, colorful, pale, etc.), finding words to describe what we hear can be more of a challenge. Although many of the same words that apply to visuals can apply to sounds as well, the way we understand these sonic terms can vary widely from person to person; what one band member might hear as "warm," another might hear as "thick" or "muddy." So in an effort to get everyone on the same page, here are some attempted definitions for some of the most confusing sonic terms out there, as well as tips on how to achieve those sounds.

If you have any experience with people who love analog gear, you’ve probably heard the word "warm" thrown around a lot. A lot of this has to do with the limited frequency range and dynamic response of analog gear, as well the way the distortions and colorations that analog gear adds to sounds. This doesn’t mean, however, that only analog sources can be considered warm. In a digital setting, you can often add warmth by boosting some low-end frequencies (usually between 200 and 500 Hz), or cutting of some of the super-high frequencies. Some engineers even use a low-pass filter on digital sounds to give them more "analog warmth," or use digital modeling plugins that are designed to emulate analog warmth. Many would argue, however, that this just isn’t the same as the "real warmth" you get from analog gear.

While warmth is usually a good thing, make something too warm and you’re venturing down a dangerous path into muddy territory. Often when someone says that a track sounds muddy, it means they’re hearing too much in the 200 to 500 Hz range. Another possibility is that there are too many reverb and delay sounds going on. When reverbs and delays are overused, they can cause a buildup of frequencies that mask the actual notes that are being played. (One method some people use to differentiate between these two issues is to call a midrange buildup "muddy," and a reverb and delay buildup "soupy." Perhaps because delays and reverbs are "wet" sounds, they turn a mud into a soup?)

The brightness of a sound has a lot to do with the high-frequency content. Usually, activating the "bright" switch on a guitar amp achieves a similar effect to adding a high shelf EQ in the 8 to 12 kHz region. In this sense, brightness would be the opposite of warmth, although many people would argue that a sound can be both warm and bright at the same time.

If you add too much brightness, you could make something sound harsh, piercing, or grating. How do you tell if you’ve made something sound harsh? That’s really a matter of opinion; while some people love the sound of heavily distorted guitars with lots of top end, others may find this sound irritating. One aspect of harshness that most people agree on, however, is the "pain frequency." This frequency is usually found somewhere around the 2 kHz mark. Often, this frequency can sound exciting at first, but when overemphasized, it can become harsh or even painful to listen to.

Thickness and fatness are often associated with guitar or bass tone, but can be used with other sounds as well. This quality is similar to warmth, but usually has more to do with how much of the instrument you hear rather than what frequencies are more prominent. Many mix engineers will thicken a guitar tone by doubling a guitar track and panning each one of those tracks hard left and hard right. Guitar players can also thicken their own sound by simply playing more strings at once, or by using effects like delay and chorus that create more sounds on top of what you’re actually playing. Bass players can make their tone thicker or fatter as well, but instead of adding layers, bass players usually achieve this through the right balance of compression, EQ, and saturation. This makes every note sound bigger, fuller, and deeper.

On the opposite end of harshness is dullness. When something sounds dull, you could say that it sounds like it’s being played through a speaker that’s covered with a blanket or a pillow. This usually means that there aren’t enough high frequencies in the sound. On the other hand, another definition of dullness could be a sound that lacks energy. Ironically, this type of dullness often comes from our efforts to make our tracks sound thick. For example, if you have too many doubled tracks in a song, this creates a lot of overlapping frequencies. Rather than thickening a sound, these overlapping frequencies will sometimes cancel each other out.

The challenging part of defining audio quality is that many of these terms have multiple definitions. However, if you’re aware of the different ways a term can be used, you can at least ask for clarification next time someone tells you that your tone sounds muddy (do you mean muddy or soupy?). Or better yet, maybe we can convene a panel of audio experts (led by Dave Pensado and Dave Grohl?) to come up with an official dictionary of audio terms. It would certainly come in handy during mixing sessions, or when you’re telling your friends about the new bass amp you just bought that makes your bass sound super fat.