6 Dead Giveaways That You're Uncomfortable Onstage 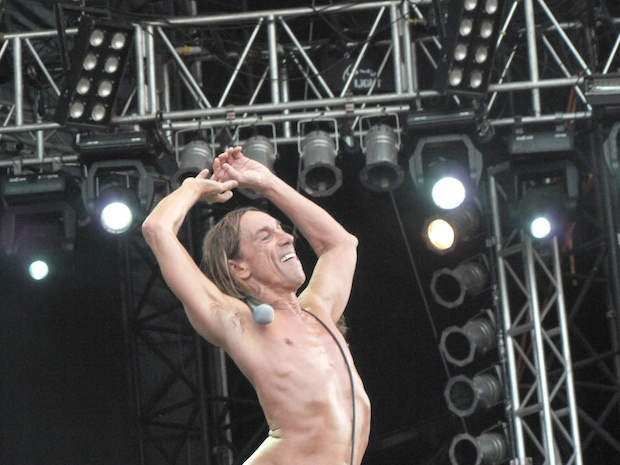 Performing live music is a nerve-racking experience. No amount of singing in the mirror or head-banging in the garage can quite prepare you for the moment when the lights come up and you're there. The center of attention. The subject of scrutiny. "Here we are now, entertain us."

Your body language can convey a confidence in your music that's contagious to your audience, but can also betray self-doubt that will be perceived just as acutely. It's your goal to put a room at ease, whether that's them leaping into a mosh pit with selfless abandon or applauding politely at a seated jazz club. Here are six notorious "tells" that can subtly indicate that you’re actually feeling more of a Woody Allen than a Buddy Holly underneath those bright lights.

Shoegaze music may be undergoing somewhat of a revival right now, but that's no reason to deny the audience your attention by staring at your Doc Martens throughout your entire performance. An understanding of that body language is innate in all of us. Avoidance of eye contact is an unspoken signifier across all cultures (and across the whole animal kingdom) that conveys negative emotions from nervousness and self-doubt to deception and even lack of respect.

There's nothing that creates a sense of connection – the feeling of a live experience being shared – like eye contact between artist and audience. And while it's great to connect with your fellow musicians during the performance, don't deprive your attention from the most effective place it can go: directly into the crowd. You know how some bands can make a stadium show feel as intimate as a club venue? Direct eye contact is how.

Expenditure of energy onstage is part of all live performances and can vary greatly from performer to performer. But if the secret to the perfect live show was simply to leap about the stage, we'd all be playing Madison Square Garden by now, supporting a troop of musical baboons. While the mugging and gyrating of Flea on the bass elicits an undeniable reciprocation in the crowd, the stoic, solid presence of Liam Gallagher behind a microphone exudes an energy just as commanding and magnetic.

In lieu of an exciting atmosphere in a venue, we've all seen guitarists, vocalists, and bass players arrive onstage and immediately fling themselves around, often without the involvement of their embarrassed bandmates. You may feel so vulnerable up there that jumping out of your skin appears to be the only logical course of action, but rather than encouraging the same in the crowd, it can have the opposite effect. There's nothing quite like one person incongruously leaping about alone onstage to draw attention to the lack of involvement in the rest of the room.

Banter. Noun. "The playful and friendly exchange of teasing remarks." Verb. "To exchange remarks in a good-humored teasing way."

Well, you can add "the single biggest dead giveaway of all that an artist is uncomfortable onstage" to those definitions. From squirm-inducing jokes, to dreadful double-acts, to ill-advised attempts to chat with friends in the audience, what's known as "banter" is first and foremost a minefield of onstage faux pas.

Banter to avoid includes forced exposure of everyone in the audience to droll private jokes and obscure references between you and friends on the front row. Berating fellow band members onstage is another offense. In both cases, what you imagine comes across as the witty repartee of lovable real-life personalities is actually two people tuning guitars while mumbling insults towards each other, because they're a bit scared. If you're not a natural comedian, it's truly best to stick with the old adage that if you've got nothing good to say, don't say it at all.

A repeat offender of onstage patter is the artist who attempts to scold the crowd for not reacting to the music. We've all seen support bands with singers who, in a misguided attempt at oozing bravado, call audiences "lazy" (or worse), for not dancing or cheering loudly enough. When everything isn't going so well up there, and people aren’t reacting how you’d like them to, being confrontational might make you feel a bit like you're Iggy Pop circa Metallic K.O., but it's yet another dead giveaway that you're a gibbering wreck of self-doubt, lashing out at a public that doesn't care.

Just like leaping onto the stage and thrashing around can make everyone in the audience feel like pinning themselves to the wall and silently sliding out of the room, demanding that an audience must dance can have the exact opposite effect. Your unrealistic expectations of their interaction only serves to underline how badly the show's going. Don't tell them what to do; rock the crowd as hard as you can and let them make their own minds up.

Be it because of muddy sound or an unresponsive audience, during a challenging set your nerves are on edge. You're in a sensitive state, so picking up on the mistakes being made by bandmates is natural. It's also the perfect excuse to release some of that tension! But make no mistake, what you're actually doing with those dirty looks is acting like a tired toddler, and it will sink the atmosphere at a show, even if the crowd can't quite put their finger on what the problem is.

Ninety-nine percent of mistakes, no matter how excruciating they feel in the moment, will not be registered by the audience and certainly won't affect their enjoyment. This isn't a Carnegie Hall piano recital. No rock gig has ever been ruined by a few rogue mistakes in a set. So it's your responsibility to avoid drawing attention to them, curb that attitude, and save your salty stares for the van ride home.

6. Repeatedly thanking the band you're supporting

Okay, we get it. You started this band two years ago, and you really appreciate the opportunity you're getting, you're massive fans of the headliners, they were huge inspirations and you got their CD when you were 14, and you can’t believe you’re supporting them, and everyone in the crowd has been so lovely, and it's our last song now so thanks again to the headliners. Seriously, do you need to tell us after every song?! Once during your set and once at the end is quite enough.

You've earned the support slot, and you're worthy of it, so don't make it sound like you've won a competition. Not only does it come across as fawning, it's a dead giveaway that you're falling back on glad-handing the crowd to get a cheap cheeky cheer. How can you live up to your billing as their peers when you're so nervous about supporting them that you're filling the air with nonsense about how great they are after every song?

P "Barney" Barnes is a campaign manager and blogger at direct-to-fan platform PledgeMusic.com, drawing on extensive gigging and DIY music business experience with rock/ska/electronic mashup merchants Sonic Boom Six. SB6 has released four studio albums, performed headline tours of Europe, America, and Japan, and have written and performed songs that have appeared on BBC Radio 1, Channel 4, BBC 2 (TV), Rock Band, and Sims 3 video games. Barney takes his coffee strong, black, and often, and would one day like to visit Australia.