How to Stay Friends With Your Bandmates for Life 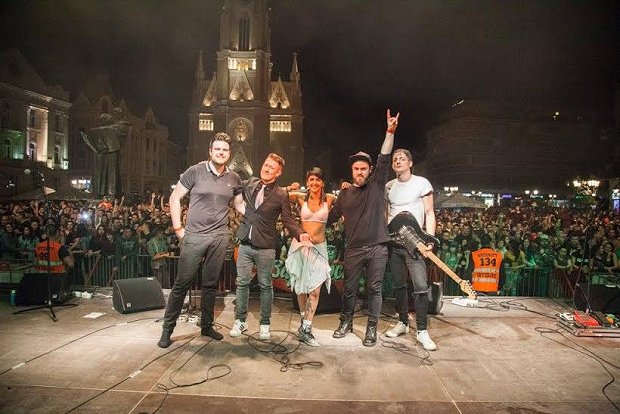 Photo courtesy of the author

With over a decade under my belt playing in the same band, to say that I've had some tumultuous times with the other members would be quite the understatement. Across punishing tours, disbanding members, extreme financial duress, and a lifetime's worth of minor squabbles, we've all – current and ex-members alike – managed to remain firm friends, but not without learning some hard-earned lessons.

After an intense, emotionally-draining live performance, it's perfectly natural that the wrong bass note that Steve's been ruining your best song with for the past three shows is the center of the universe. But with emotions amplified, scrutinizing mistakes made during the set immediately after getting off the stage is a scenario where small criticisms become big arguments. If that bum note is important enough to discuss, it's important enough to put aside for 12 hours so that it can find a more suitable context. And, after a good sleep, you might just find that what seemed like the most urgent thing on earth last night wasn't really worth shouting about after all.

When a band member does something that offends you, hurts your feelings, or even causes you to question your judgment about them, the worst thing you can do is bottle it up. While avoiding confrontation might seem like the grown-up thing to do, in all likelihood, burying the negativity without addressing it will affect your subsequent treatment of the offending band member in ways you don't anticipate or realize. There are few disagreements that can't be resolved by hearing both sides of the story, so find a good time to sit down and talk through the problem. Once you've hugged it out, you'll kick yourself that you didn't endure 30 minutes of discomfort for your friendship's clean bill of health weeks before.

Being on tour is an abnormal situation. You and your bandmates are cooped up together for 24 hours a day with exhausting travel arrangements and challenging accommodations, yet often, that hour onstage is the only time where your collective energies feel truly united. Between the gas stations, backstage rooms, and grotty motels (and that's if you’re lucky), there isn't always a lot of time for friendship. Make time for excursions as a band and crew unit on tour, such as going to the cinema, stopping for a meal together, or taking in a local landmark to provide a context away from the music to remind you why you got together in the first place.

If a bandmate is suffering on tour – missing his or her partner, not enjoying the shows, frustrated with the road – it's difficult for all of you, because a bad mood affects everyone in its proximity. There's always the temptation to try and cheer the gloomy member up, ask if he or she is okay, and if that fails, shame him or her into pulling out of their sulkiness with ridicule. But, as it all becomes so obvious when you're having a rough day, often all you need is a little time to yourself or a friendly ear to bend away from the pack. Find a quiet, one-on-one moment and just let that person talk about those issues – resisting the urge to disagree, sermonize, or judge – and more often than not, you'll find that all your bandmate needed all along was an opportunity to vent some verbal steam.

5. If you love someone, set them free

No matter how hard you've worked, the career you've built, and the sacrifices you've made together, there may come a time when one of your partners in music wants to jump out of the van and pursue other things. There could be a million different reasons for this – and they could be reasons that you consider to be misguided mistakes – but ultimately, it's that person's decision. Trying to stand in the way of a life choice of this magnitude is grounds for a serious falling out. It's far better to leave everything you've accomplished together with a friend rather than an enemy, because either way they're gone. You might feel you'll never be able to replace your bandmate, but when you do, you'll be surprised at how creatively reinvigorating a band is with new members who actually want to be there.

Last but not least is a mantra that will serve any musician well, far beyond the remit of this article. When a band is at the center of your life, the emotional energies attached to the relationships around it are hugely amplified. Far be it from me to downplay the existential beauty of being able to express oneself through music, but is it really something worth destroying relationships over? Should guitars, drums, and bass be a cause of destruction in your life? Making music should be an enjoyable process, a chance to do something artistic, gratifying, and meaningful. If your drive to succeed is leaving broken friendships, bad blood, and ugly memories behind your musical adventures, chances are you're taking it all just a little too seriously.

Learn more about being the best bandmate you can be: