The Essential Guide to Busking in Nashville 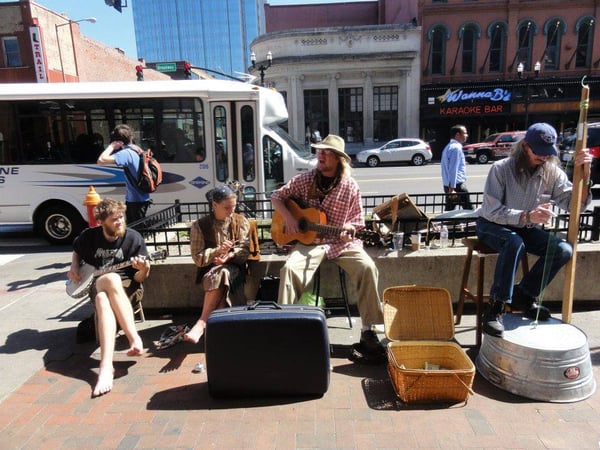 Abby the Spoon Lady, second from left, with other street performers in Nashville. (Image via Nashville Street Performers)

There's no shortage of incredible musicians in Nashville, so it makes sense that its street performers are exceptional – and that there's plenty of 'em, too. So if you're planning to busk in Music City, expect stiff competition for audience attention.

Still, Nashville's a really great place for free, open-air sets. The city and its residents actually welcome musicians, magicians, and other performances – so long as you abide by the rules, of course. Read on for a complete guide to busking in Nashville, rules and locations included.

Street performers in Nashville are exempt from panhandling laws, but that doesn't mean the practice isn't subject to regulation. Additionally, asking for money is not permitted. Performers can, however, accept donations of an undisclosed amount. You just can't outright ask for them or indicate a specific amount. (But you are allowed to answer any questions listeners may have.) If you're going to sell merchandise, you'll need a vendor permit.

The Nashville Street Performers group has compiled a comprehensive list of courtesies to consider when performing. Among them: don't be drunk, pick up your trash, and be respectful of listeners, even if they're enjoying the show without tipping.

Also, remember to be considerate of other performers. Don't set up too close to another busker, and also avoid setting up too near a storefront. Find a spot away from a business, all for yourself – there's plenty of room for everyone!

The best spot is actually anywhere on Lower Broadway, the area between First and Fifth Avenues. Known as the Honky Tonk Highway, it's home to the Ryman Auditorium, the Nashville Convention Center, the Bridgestone Arena, and of course, famous honky-tonks like Robert's Western World, Legends Corner, and Tootsie's Orchid Lounge. It's a magnet for tourists as well as local music lovers, making it a prime location for buskers.

Connect with the community

Message or post on the Nashville Street Performers Facebook page on to make connections with local buskers. The page is run by seasoned performer Robin Bernard, also known as Bird Dog, with help from Abby the Spoon Lady, a long-time Nashville busker currently based in Asheville, NC. Both musicians are well known in the city's busking community, and seem willing to help up-and-comers and visitors from out of town.