The Introverted Musician's Guide to Self-Promotion 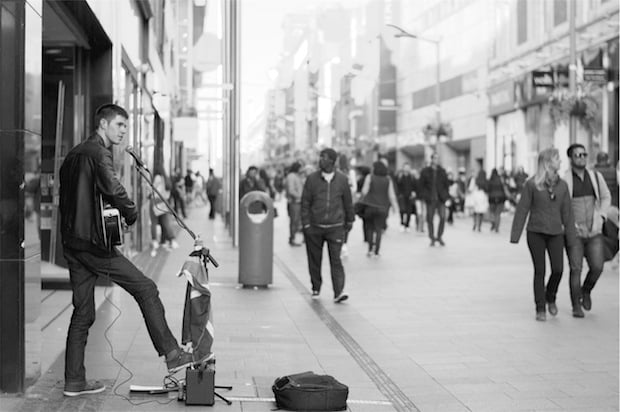 Photo by Alejandro Lopez via stocksnap.io

The common prescription for success in the music world these days goes something like this: hustle, hustle, and more hustle. Without a record label or publicist backing you (and even sometimes when you have their help), most promotion for DIY musicians turns into self-promotion. If you’re an introverted musician, however, self-promotion is probably the last thing you ever want to do, and even saying the word "self-promotion" probably leaves you with a gross taste in your mouth.

We all know that self-promotion is essential for success, but for an introvert, the whole process of sharing your music with the world is typically exhausting at best and terrifying at worst. You may think that as an introvert, you’re simply not designed for self-promotion, but the truth is, if you use your nature to your advantage, you can become just as comfortable when you’re out promoting your music as when you’re practicing at home or playing onstage.

According to author Susan Cain, introverts "listen more than they talk, think before they speak, and often feel as if they express themselves better in writing than in conversation." While you could see your tendency to listen first as a disadvantage when it comes to meeting people, think about it from the other person’s perspective: while most people who engage in self-promotion only want to talk about themselves, you’re actually willing to listen to what other people have to say. This makes you a welcome break from all of the other musicians out there who are only focused on their own agenda. Listening before you speak may not be the quickest way to get the word out there about your music, but it’s the best way to develop the sustainable relationships you need.

Stop thinking of people as "contacts"

Marketing jargon tends to make a mess of our personal relationships. Instead of thinking of the people we meet online or out in the world as other people just like us, we’re told to think of them as "contacts" or "leads." If all you’re looking for with each new relationship is a career boost or an opportunity to make a sale, then you’re devaluing other people as well as yourself.

Instead of getting sucked into the idea of dehumanizing our interactions by constantly pushing a marketing agenda, focus on cultivating friendships first and pushing your agenda second. Seeing your interactions in the industry this way actually helps to take a lot of the fear and doubt out of self-promotion; it’s a lot easier to ask people how their day is going than it is to ask them to buy your album.

If you’ve never heard of permission marketing, go learn about it right now. It may just become your new best friend. In contrast to other marketing terms, permission marketing is a term that actually helps us think about other people as individuals. The golden rule of permission marketing is essentially to "market unto others as you would like to be marketed to." Basically, before you try to make a sale, make sure the people you’re selling to are actually interested in what you have to say. You can do this by asking people to sign up to your email list, for example, or by contacting bloggers who have already written about your music.

"We tend to think that people’s default mode is not wanting to buy," says business strategist and Quiet Revolution author Tara Gentile. "That’s not true. Look around: our default mode is absolutely wanting to buy! The real problem is that people don’t want to be sold to; they want to believe they’re in control of the situation." Permission marketing gives people control over what information they receive, and at the same time, gives you access to people who want to know more about you. This takes a lot of the pressure out of the self-promotion scenario: rather than cold-calling people, now you’re offering them information about something they’re already interested in.

As an introvert, and a creative one at that, admitting success can sometimes be the hardest thing to do. Modesty drives introverts to do great work, but it can also be an impediment to sharing that work with the world. Some people try to compensate for this by boasting about their work, even when they don’t feel satisfied with it. While some extroverts may be able to pull this off, introverts attempting this strategy usually come off as awkward or insecure. So instead of trying to brag about your music all the time, focus on making great music first, and then work on sharing it with the world.

Boasting also puts the attention on you, rather than your music, which is exactly the opposite of what most introverts want. Introverted musicians may have a hard time talking about themselves, but get them started on their favorite band, and they can talk for days. Similarly, you can become a better self-promoter by shifting any unwanted attention away from yourself and toward what’s really important – your music. If you make your self-promotion more about your art than yourself, you’ll have an easier time putting yourself (and your music) out there.

All of this might not make self-promotion fun for you, but it could take a lot of stress out of the situation, and make you a better self-promoter in the process. By reshaping the way you think about sales and marketing, you can actually begin to see your introversion as a strength rather than a weakness in this field. Then, next time someone uses the words "self-promotion" or talks about "the hustle," you should be able to fight the urge to jump off the nearest bridge, and you may even be able to talk about your favorite methods of sharing your art with the world.