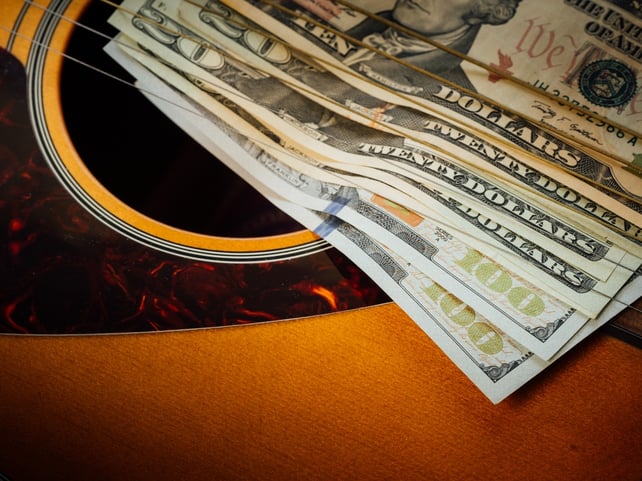 Musicians seem to have a problem asking for money. It can be tempting to accept low-paying jobs as a way to set yourself apart from the competition, particularly if you're just starting out. The paradox of this approach, however, is that it can lead to a dangerous downward spiral that’s not just bad for you, but for all musicians. Here are a few things to consider before you take a low-paying gig.

What qualifies as a low-paying gig?

What qualifies as a low-paying gig is really more of a personal question than a financial one. A session musician who's been playing for 10 years might be offended if someone offered him or her $300 for a day in the studio, while someone who’s just starting out might be perfectly happy with this rate.

If you really want to put a dollar amount on it, however, consider how your fee for a gig would translate into hourly pay. If the hourly rate is something you could live off of, then the amount you’re getting paid for the gig is probably worthwhile.

It’s important to take into account the work that goes into the job you’re doing, not just the job itself. If you get paid $100 for a two-hour set, it might sound like you’re making $50 an hour, but once you factor in rehearsal time, gear expenses, transportation to and from the venue, marketing costs to promote the event, and all of the other work you do to prepare for a gig, the amount you’re making per hour is considerably lower.

What accepting low-paying gigs says about you

When you accept a low rate for a gig, you’re telling the person who hired you that your time and abilities aren’t valuable.

The logic for accepting low-paying gigs usually goes something like this: “I don’t want to miss this opportunity, and even if I’m not getting paid enough this time, I can work my way up towards higher paying gigs.”

This, however, is where the paradox of low rates comes into play: once you start accepting low payment rates, you actually compete downwards, not upwards.

By working for low pay, you’re establishing yourself as someone who’s willing to work for less than what you’re worth. Once you’ve built that reputation, it’s hard to shake it.

This behavior also says something about the music industry at large. When musicians accept small payouts for gigs, they’re reinforcing the stereotype that music has no real value in today’s society. Music is such an integral part of everyone’s daily lives, yet few people recognize its true monetary value.

By taking a low-paying gig, you’re not only reinforcing this misperception, you’re also incentivizing people to offer more low-paid opportunities for musicians, which is harmful to both you and your fellow artists.

When to turn down a low-paying gig

Musicians can complain as much as they want to about how music is undervalued, but the only way to change this misperception is to actively teach people what music is really worth.

Turning down an opportunity is a scary proposition, but sometimes saying “no” is the most empowering thing you can do. By turning down a gig because you feel it doesn’t offer appropriate compensation, you’re saying that your work has value, and that you’re not willing to engage in a race to the bottom on pricing. This creates an incentive for people who work with musicians to offer fair compensation.

You may lose some potentially exciting opportunities this way, but if you spend all your time taking low-paying gigs, you’ll never have time to connect with the people who are willing to pay you what you deserve for your work.

If you’re building your career as an indie musician, not every gig you take will be your dream gig – in fact, you’ll probably have to take a lot of crappy gigs before you get to the good ones. The challenge is to make sure you’re not devaluing your own work and the work of other musicians in the process.

While there will be times when you’re willing to play just for exposure, to create connections, or to build up your resume, it’s often better, in this case, to take a free gig rather than a low-paying one.

So if the opportunity seems right, go ahead and take that unpaid gig, but when money comes onto the table, make sure you’re getting what you’re worth.