Top 5 Unusual (But Brilliant) Places to Perform in New York 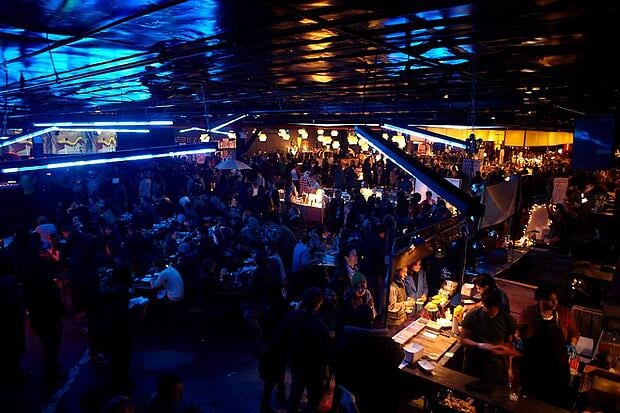 New York's music scene is so massive that it extends beyond the norm to countless nontraditional venues like basements, art galleries, and bowling alleys. After all, real estate is both pricey and limited, so multiple uses for one space makes complete sense. And it makes for truly memorable performances, too. Peruse these five unconventional spots for a sampling of the unique places your band could potentially play in NYC.

It's not unique so much for its Greenpoint location but, rather, for its ambitious concept. This weekend event is a whirlwind of local culture, featuring food, drinks, artists, handmade goods, and of course, live music.
Why it's a great place to perform: Because it spans a variety of creative mediums, the draw at Brooklyn Night Bazaar is varied. You'll perform not only for music lovers, but also fans of other types of art you wouldn't necessarily reach in a traditional setting. Plus, it's free and open to all ages.

Presumably named for the California campground surrounded by Illuminati conspiracies, this basement cellar is actually a hub for progressive art. Some of the artists who help curate events at BG even live in the rooms above it. The performance setting is intimate, very appropriate for experimental but low-key artists and, naturally, it's decidedly community focused.
Why it's a great place to perform: Bohemian Grove attracts the type of attendees who want to fully absorb whatever art you're presenting. And on that note, it's a very open and independent-minded place, so your off-kilter presentation – be it neo-folk, ambient electronic, reggae, or music infused with theatrics – might be just what they're looking for.

This spot has multiple purposes, but all of them are musical and rooted in folk. Available during the daytime are classes of all kinds: dance, harmonica, ensemble, mandolin, banjo, and more. There are lessons for kids, too, and a nice selection of instruments – all genre staples – for sale. String bands, folk acts, roots musicians, and the like perform nightly, plus a few theater groups here and there.
Why it's a great place to perform: The environment is perfect for a musician's musician, meaning you'll likely play for the sort of crowd who really appreciates a skilled plucker, vocalist, or songwriter. And those kind of listeners make for great fans and often great connections.

Located in a former iron works building, the company's New York location (there's also one in Vegas and another in London) plays host to incredible events, like DJ Questlove's recurring night and sets from groups like Clap Your Hands Say Yeah and Jessica Lea Mayfield.
Why it's a great place to perform: While a lot of bowling alleys that host shows do so only sporadically, Brooklyn Bowl schedules them on a regular basis – which means they've got the sound down pat, and there's an established clientele that might check out your show simply because they're regulars.

Exhibitions, private studio sessions, yoga classes, workshops, and lectures are among the ways this Brooklyn venue is used – besides being a place for shows, obviously. The inside is spare and clean like most galleries, but the front window has been blasted with psychedelia, and the courtyard's replete with intricate murals.
Why it's a great place to perform: Lately, the music selection's a little slim, but that might only be for the time being and for arbitrary reasons. There's been dreamy jangle-pop and twangy alt-country and a slew of other bands you'll love at first listen in the course of this Brooklyn arts mecca's existence. It could be that its bookers are just being selective, which would make getting a gig there even more of a triumph.