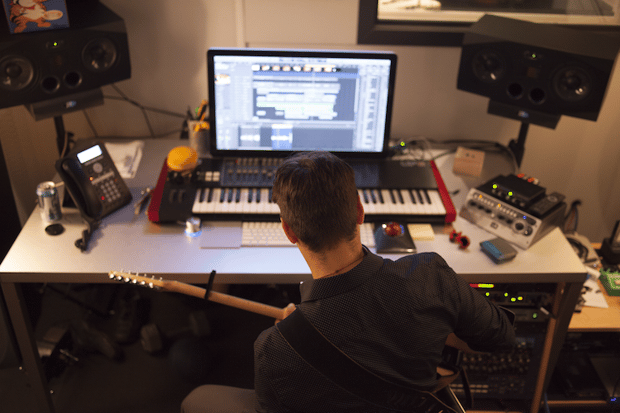 Music production. The term likely conjures mythical images of Sir George Martin running frantically around Abbey Road Studios or Phil Spector conducting a massive orchestra. In their time, the term "record producer" simply referred to the person overseeing the completion of the musical product. Given the myriad music-making tools at our disposal today, however, this once-simple definition has become diluted and confused. So let's clear up a lot of common confusion around the modern record producer's roles, responsibilities, and duties.

According to the performing rights organization BMI, "A producer is to a recording as a director is to a film. When it comes to making a film, the buck essentially stops with the director. It's the director who steers the ship, working with everyone from the technical editors to the actors in order to achieve his or her overall vision of the movie. It is exactly that way with a producer when it comes to making a recording."

In musical terms, this means that a producer needs to have the technical expertise to make critical decisions about a mix with the engineers; the songwriting expertise to craft the arrangement of songs with the artist; and the entrepreneurial acumen to manage budgets, find studios, and negotiate contracts. In short, the producer guides the creative process, acting as part project manager, part creative consultant, and part artist.

A producer's role in the recording process

In this traditional sense, the producer must possess a set of technical skills as well as the big-picture mindset to manage the project from above. To help craft the "sound" of an album or project, the producer must understand the nuance of engineering a full mix in order to knowledgeably ensure that certain sounds are more emphasized than others, and that the mix carries the artistic message intended by the project. At the same time, the producer must have an understanding of the recording process. Finding the right studio with the right equipment to record the right sounds is essential to the mix, the sound, and the perception of the album.

What's more, while recording, the producer must be able to coach the musicians on getting the right sounds out of the instruments at hand – be it vocal takes in the booth or different voicings of the same chord on a piano. In this way, the producer also treads into songwriting territory, often helping to craft the trajectory of the track.

Of course, as with most deeply artistic endeavors, this role varies project to project, and indeed, producer to producer. Though it sounds like a lot, different genres and artistic styles have different needs. According to producer Donny Baker, "The music producer is hired because of his ideas in your genre of music." That is, often, producers will have a specific specialty that they excel in; this specialty, likely their genre-based experience, will make them a desirable managerial and stylistic complement to the project at hand. For instance, sometimes a project needs someone to think about instrumental arrangement, whereas other times, artists will want complete control over that aspect of their songs.

Producer Phil Ek sums it up: "I think a good producer agrees with what is the best for the band and helps bring out the best and makes it sound the best and have them perform at their best. Whether it’s the producer's idea or not, that's the proper creative direction."

The rise of the digital audio workstation

In years past, a producer would fill these traditional roles across a project slated for release through a label, and would get work through studio-based projects and timelines. However, with the rise of the digital audio workstation (or DAW, for short), the traditional studio and analog model have been turned inside out. What happens to the notion of a producer when the "studio" is contained inside a computer?

The answer, as you might have guessed, is rather complex, and has lead to a fragmenting of what one might traditionally consider a record producer, as well as a heated debate within the music community at large. But, in many ways, the roles are still similar, and the difference hinges on one key distinction: beatmaker vs. record producer.

In simple terms, the distinction between a beatmaker and a record producer is similar to the difference between an old-fashioned songwriter and a record producer: the songwriter would simply be in charge of writing the song, which would be in turn performed in the studio by musicians and artists who would ultimately release the song. (Note: This still occurs, but is much more confined to the upper echelons of pop songwriting.) The analogy holds: the beatmaker creates the beat or beat idea, which is sold or absorbed by an artist's project and turned into a full-fledged song by the producer.

However, in increasingly popular forms of songwriting that are informed by technological production in DAWs, this distinction treads into murky waters. What if, say, a producer of a hip-hop album made a beat in a DAW that the artists runs with, only for the producer to come in and engineer the vocal performance, all of which is sent off to a separate mix engineer to be glued together? The "producer" is now beatmaker, songwriter, and record producer all in one. It gets even trickier for the so-called "bedroom producer," someone like the artist XXYYXX, who pulls samples and software synths together into an album. In this case, the beatmaking, songwriting, mixing, and engineering all take place simultaneously in the DAW.

How can we sift through these semantic weeds? And why does it even matter? Well, crediting in the music industry is a big deal – and getting paid for work done matters immensely to producers, managers, and artists alike. Ultimately, the distinction between beatmaker and producer lies in differentiating between someone who makes a beat and hands it off to a crew of people to turn into a song, and a person who makes a beat and a songwriting idea and sees it through to completion with the artist, album, or project. If you're doing all of that work to take a musical concept to market, then you're producing. Maybe in this example, the producer also gets a songwriting credit – but they still craft the final product.

In this way, producing is more accessible than ever – but making a beat in Ableton isn't producing outright. The challenge still remains: can you write, record, engineer, mix, master, and release your own material on your own or with an artist on your team? Taking that next step – that's the mark of a true producer.

Myles Avery really likes music. He's nerdy about it, enjoys listening to it, and loves making it. Originally a classical trumpeter, Myles expanded into jazz and electronic composition at Wesleyan University, and is currently working as a freelance composer and producer. He has worked with several NYC and Chicago-based hip hop artists, including E.Oks, Josh The Word, and Ric Wilson. He leads production and recording sessions at The Bunker Williamsburg, Mission Sound, Spaceman Sound, Degraw Sound, and Headgear, among others. Myles also composes and performs for his own electronic ensemble, Strada, that sits between the worlds of algorithmic looping and analog synthesis. You can hear all of it on his SoundCloud. Keep up with Myles on Facebook, Twitter, or email.