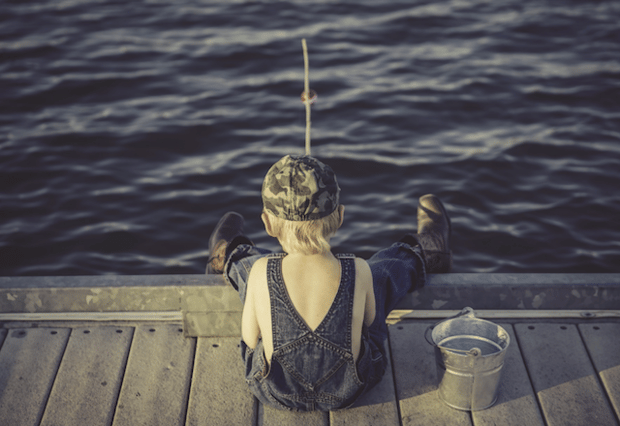 Look at the picture above. At first, it may just seem like a young boy fishing on a dock. While that's true, there's a far deeper meaning behind this. Inside that boy's head, internal war wages on between patience and restlessness. A part of his brain may want to go inside and eat some candy, but another part urges him to stay.

Maybe if he just waits a little longer, he'll catch that fish he so patiently waited for. If not, then he may see the whole effort as a waste of time. Believe it or not, this fishing analogy will relate to music, so just hang on.

Patience, they say, is a virtue. Sure, that may look nice on a coffee mug or something, but one doesn't have to have particularly high moral standards to exercise patience. Anyone can do it. In the realm of music, patience is particularly important. Unlike fishing, musicians won't be waiting around to get their reward. They have a lot more control over the end result than a fisherman. That's not where patience comes in handy. This type of patience relates to your progression.

Think about baby steps. Whether you're trying to lose weight, memorize the periodic table, or travel the world, you'll never get the end result immediately. These things take time and, above all, these things take patience. Tiny changes over a period of time will eventually lead to some impressive results. It's these tiny changes that take you from a good musician to a great one, but it takes some work.

Like most qualities, patience can be learned. Learning, especially in music, is greatly affected by developing good habits. People aren't just naturally patient. They've built up that skill over repeated practice of a good habit. Like the saying goes, "We are what we eat," we are represented by what we repeatedly do.

Think about your daily habits. Do you have a routine at all? Are there certain habits that would take your playing to another level? Most likely, there are. We all know what it takes to be a better musician, friend, cook, or dog walker. The problem is that we might not actually act on these things.

In the grand scheme of building your music career, the end goal is pretty well defined. You want to be the best musician you can be and have a successful career in music. It seems like a basic conclusion, but the road there is filled with seemingly infinite baby steps.

You have to practice daily, practice mindfully, read music, listen to music, critique yourself, organize your practice sessions, and somehow find time to get some solid rest. That's just the homework, too. Add in all the stress of booking gigs, promoting shows, and recording songs, and the process can become overwhelming. It's understandable why musicians don't have the patience for these baby steps, and for this reason, they seek out one big solution.

The myth of the "big one"

Any number of those famous heist movies all revolve around one big heist. In these films, the charismatic criminals all band together to create one giant plan for one giant solution. To these men, petty thieves are looked down upon as suckers. Why go around stealing a couple thousand here and a few hundred there when you can get five million in one fell swoop? Well, in the art of thievery, this may seem like a great idea, but you're a musician. There isn't a "big one."

When coming across a musical challenge, we have a tendency to search for a radical fix. Perhaps it's just practicing faster to learn more music or buying an expensive new instrument to make you sound better. In a way, dramatic changes like this can have a good result. However, the problem with the "big one" is that it won't help you become a better person.

Let's say a famous band is coming to town and you put all your resources into opening for this act. If you open, instant fame will rain down on you and your bandmates, and the world will be yours to take. If by some chance this works and you find yourself playing at Madison Square Garden, then congratulations. However, if you fail, it's likely you'll just revert back to your old ways and zero progress has been made. There's a way around this, though.

Building a strategy for continuous improvement

There are a wealth of business strategies out there based on the concept of continuous improvement, but we're going to examine a Japanese method for this particular example. Kaizen, as it is called, is one of the most used words in Japan. It's a large factor in Japanese competitive success. In recent years, the Western world picked up on this concept and began using it to improve production. It may sound like a lot of business jargon, but the same philosophy can be applied to your music career.

What you want to do is build your own strategy for continuous improvement, or Kaizen. The reason we're calling it a strategy is because it's complex; it's not just an idea or quick plan. This strategy will need to be implemented over a long period of time until it essentially becomes a part of your personality.

Most quick ideas tend to fail because they require drastic commitment. The overwhelming nature of this takes over our patience and we revert back to our old ways. With a strategy, you can develop small changes in your behavior. Over time, habits will form and your skills will be taken to the next level.

Let's say you have a goal of practicing three hours each day. At the moment, you only squeeze in 30 minutes. Instead of just sitting down and playing for three hours straight, try adding 10 minutes each day. If you're trying to learn a long, complex song, just nail one part at a time.

Want to practice in the morning but hate the idea? Start by simply taking your instrument out in the morning without even playing it. Hopefully, you get the idea by now.

The end results you want as a musician are not impossible. Just exercise patience and you'll be on your way to excellence.