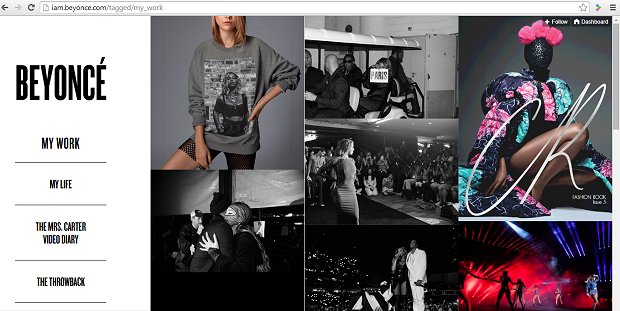 Beyoncé's Tumblr is a prime example of staying organized. (Screencap via iam.beyonce.com)

Almost every musician has a Facebook page and a Twitter account, and the ones who are really "on top of it" might even have Instagram. But when it comes to musicians on Tumblr, there are relatively slim pickin's out there. Which is a shame, since the site hosts around 200 million blogs, and "canon" usernames (meaning, names of bands and artists spelled correctly, like yeahyeahyeahs) sometimes yield nothing.

Unlike Facebook/Twitter/Instagram, the sharing mechanism of Tumblr covers many different types of post formats, including standalone music and video uploads. It’s also (relatively) easy to search not only within a particular blog, but also throughout Tumblr’s network. If you’re looking to gauge a post’s reach, the reblogging system allows you to see which users are influential in spreading your work. And Tumblr’s userbase is the most engaged and mobile-savvy of all the major social networks.

So, what makes a Tumblr page different from every other online profile? Take a look at how these five musicians are rocking Tumblr, and learn how you can take advantage of its different posting options and intimate interface.

Unlike the substantially wordier Wordpress or Blogspot, Tumblr allows users to post longform, photo-embedded entries alongside, say, links and quote snippets. Why does this matter? Because as quippy as Facebook or Twitter can be, neither of them allow for much of a journal-like presence. And despite what people who disdain social media think, people do actually read on the internet, and take to Tumblr as a way to easily post daily musings as well as baby animal .gifs.

For example, Grimes' Tumblr is so notable that it even popped up in her profile in The New York Times. With internetz-friendly features like Solid Snake as her background and Adult Cat Finder in the foreground, it’d be easy to dismiss the content as silly stuff – but then you read her longer text posts about recording techniques, personal frustrations, and everything else that gives fans some insight into what’s going on underneath that kaleidoscopic hair.

2. Keep everything organized around you

On my personal Tumblr, I tag everything from "#husband material" (usually golden-era Harrison Ford) to the more ambiguous "#ah yes" (text posts that hit a little too close to home). This organization, while seemingly haphazard, makes it incredibly easy for me to find exactly what I’m looking for later on – a feature that’s certainly helpful when I’m looking for specific content on my favorite Tumblrs.

Prolific on every social network, Beyoncé (or rather, her social media team) keeps her Tumblr well-populated with a mishmash of .gifs, concert stills, candids, behind-the-scenes photos, videos, merch, and fan shoutouts. You can sort her work posts from her more personal ones easily with the use of curated tags and a simple, manageable layout.

3. Connect directly to fans (and be a fan yourself)

It shouldn’t be a surprise that many of the blogs on Tumblr are run by fans, whether of TV shows, movie stars, or, you guessed it, musical artists. When you’re running your own Tumblr, however, you’re able to interact with fans through reblogs and asks, and also show off your own fandoms, minus the sponsored/commercial aftertaste that same behavior might have on Facebook or Twitter.

At a glance, the Tumblr of Ella Yelich-O’Connor (aka Lorde) could be mistaken for some random under-20-something’s blog, and then you see the asks from fans, whose queries range from ticket requests to lyric clarifications. Lorde’s been pretty vocal about the fact that she is, underneath it all, a regular young internet-dwelling woman, and it shows – both in her reblog comments (she’s a Nicki Minaj fan) and her replies to questions.

On sites like Facebook and Instagram, you’re exposed to all sorts of comments, but Tumblr’s notes feature and asks filter make it easy to keep your blog free of vitriolic comments. Whether you’re posting sensitive content or, knowing the internet, want to keep your page free of trollish negativity, it’s easy to find themes that fit that bill, but still let you put yourself out there.

The Tumblr post read 'round the world, in which Frank Ocean revealed his non-heterosexuality, was a simple screenshot; even now, when you visit the post, all you see is that original image. While both the support and the hate over Ocean’s message stormed on around the internet, you’ll find nothing but an astronomic note count in addition to the original post on his Tumblr.

5. Build on your following

To anyone looking to start a website from scratch, Tumblr is the most multimedia-friendly, community-built platform to use. The trick is researching who and where to reach out to, but once you begin, it’s easy to share and network internally, and then build out from there.

The New York-duo MS MR’s formal website is built on Tumblr, but it’s on msmrmusic that they built up their fanbase, releasing EP "Candy Bar Creep Show" directly on the site. And though the formal site has standard info like tour dates and remix announcements, msmrmusic plays to the average Tumblr user’s interests and can give non-fans a reason to stick around.

Lilian Min can commonly be found typing setlists on her phone and standing on her tiptoes in the crowds of live shows and festival sets in the Los Angeles area. When she's not in a photo pit or jostling for floor space, she works as a publicity consultant.