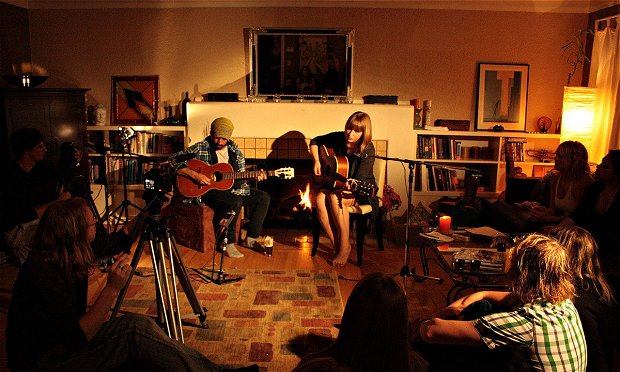 I’m a singer/songwriter from Los Angeles, and on my summer tour in 2013, I made $25,000 in two months without stepping foot in a bar, club, theater, fair, or festival. This summer, I’m on a 60-show North American tour, and every show is taking place in the living room or backyard of one of my fans.

Not only are house concerts the most enjoyable kind of touring I’ve ever done, they're also the most lucrative. And, most importantly, making it happen didn’t require permission from any of the traditional music industry gatekeepers.

This tour is the result of a few years of developing a model that I think could be revolutionary for a lot of indie/DIY artists. Instead of beating my head against the wall trying to get established on the national club circuit, I’ve been partnering with my fans to spread my music virally to their communities.

It all started when a fan of mine in San Diego emailed me in 2011 and said, “You should come play in San Diego. You could play in my living room. I’ll invite my friends, and we could collect donations for the show.” I thought, “Why not? I’ll at least make gas money for the trip.” But I ended up having the most rewarding performance experience I’d had in a long time – and I walked away with a lot more than gas money.

In the ensuing months, I started to experiment with booking fan-hosted house concerts as “filler dates” on my traditional club tours, and the house concerts quickly began to outperform the club shows on every metric. I was making more fans, getting more names on my email list, selling more merch, and making way more money than at the club shows.

So, in 2012, I asked my fans if they’d do something crazy with me: “What if we did an entire summer tour of house concerts?” I told them that all they needed to be a host was provide a place to gather and a minimum of 20 adult friends to come to the show. If enough people in their part of the country wanted to host a show, I would travel there during the tour. Two years of growth later, my husband (producer/engineer Jamie Hill) and I are on our 60-date adventure all over North America.

We’ll be going back this summer to many of the houses we’ve been to over the last couple of years, and to many new places, too, because this model has a viral aspect. A lot of hosts this year were guests at house concerts last year, or have seen on social media the adventures we’ve been on the last two years and asked to be a part of it.

I started booking this tour by putting the word out to my email list and on social media at the beginning of April. Less than one month later, the majority of the summer tour was confirmed. One big difference in booking fan-hosted house concerts vs. club shows is that every host is excited to plan a cool event with me, making the process highly efficient. Contrast this with a club promoter, who can’t be nearly as prompt and accommodating in their communication due to the dozens of artists who reach out daily wanting to book a show.

We travel in our VW Jetta with my keyboard, a small PA, all our merch, and luggage. Many nights, we’re able to stay with our hosts, so our tour expenses are very low. We’re not spending a fortune on a gas-guzzling tour vehicle or accommodations, which means we get to go home with more of the money we earn each night.

And we earn good money. On last year’s tour, we averaged $500 a night on a 50-show tour, resulting in the title of the how-to book I published last spring: No Booker, No Bouncer, No Bartender: How I Made $25K on a 2-Month House Concert Tour (And How You Can Too).” Fifty-five percent of our gross came from guests’ donations and 45 percent came from merchandise sales.

The most amazing part of this new touring model for me has been the dramatic way in which it has changed my relationship with my fans. By partnering with my supporters to put on intimate and connective concerts in their homes, I’ve created deep bonds and a community of superfans. There is something magical that happens when people gather in a room to share an intimate music experience, and you can turn that magic into a thriving, sustainable career. You should give it a shot.

Shannon Curtis is an independent musician and recording artist based in Los Angeles. Her new book, No Booker, No Bouncer, No Bartender: How I Made $25K on a 2-Month House Concert Tour (And How You Can Too), is available as both an e-book and paperback from Amazon and her website. Her second album of downtempo dreampop, Metaforma, was released in June.