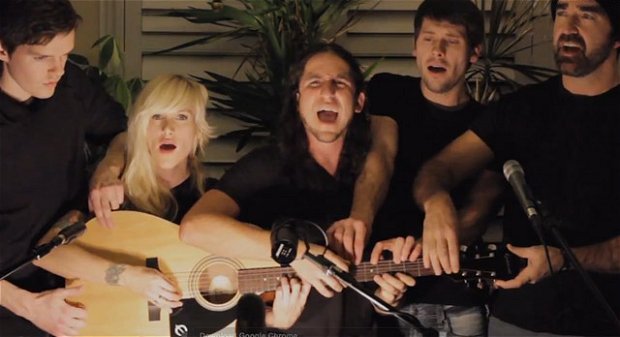 If you're getting as many hits as Canadian band Walk Off the Earth (60 million on one video!), or even if you're not, you should look into YouTube advertising. (Image via hlntv.com)

Today's society loves a good visual, so music videos, live performances, and even lyric videos are becoming huge components in a musician's tool kit. Plenty of fans stumble upon new music from YouTube – in fact, it's the number one way that teens today discover music – and many artists use the platform for bonus content, sneak peeks, and much more.

YouTube becomes an even more effective platform for artists when paired with its simple-to-use TrueView advertising feature. Most artists shy away from advertising because it conjures up images of dollar signs flying out the window, but YouTube (as well as many social platforms) easily works with a budget, and can go as low as $1 to $5 a day for a campaign. Here are some quick ins and outs of YouTube's native advertising feature (as well as organic tips) that can help your next music video, vlog, or any other content get that needed boost.

1. Is your video worth advertising?

Before we go any further, let's first address the kinds of projects that typically will and will not benefit from advertising. The following are probably worth throwing some advertising bucks behind:

These videos either may not be worth the advertising investment or may be worth a smaller budget:

If you're confident that the type of video you have in mind is worth advertising, the next step would be to make sure that it's naturally well put together and shareable. Your videos should be professionally shot and have a decent runtime. Typically, an effective YouTube video is less than five minutes. I don't know about you, but even if I'm an artist's biggest superfan, anything longer than eight minutes is just going to have me open a new tab to browse around a bit.

YouTube ads should act in a similar fashion as TV commercials. They should serve as a way to entice viewers to click the little "view more" button. So if you're promoting your music video, for example, you may want to make a teaser ad for it unless the first 30 seconds or so are really captivating and enticing.

Your teaser ad may be a highlight video of good scenes from your music video with captions along the lines of "out now" and "click to view the entire video." Now, success can certainly be had from just using your video as an ad, but it's always great to be creative with ads to stand out from the static.

Another advertising idea could be to have a clip of you or your band speaking to YouTube viewers asking them to click more to see your video, download your project, or whatever it is you're promoting. Have fun and be creative!

3. Choose your budget and execute

Folks shy away from advertising because of two reasons: money and confusion. Luckily, YouTube's advertising feature makes it all very simple. Here's how to get started:

And there you have it! You now have an ad that will be placed in front of many new eyes. Also, don't forget to share your project on your other social media outlets for maximum potential.

Learn more about getting your videos watched on YouTube: