How to Build a Home Studio: 5 Essentials You Need to Get Started 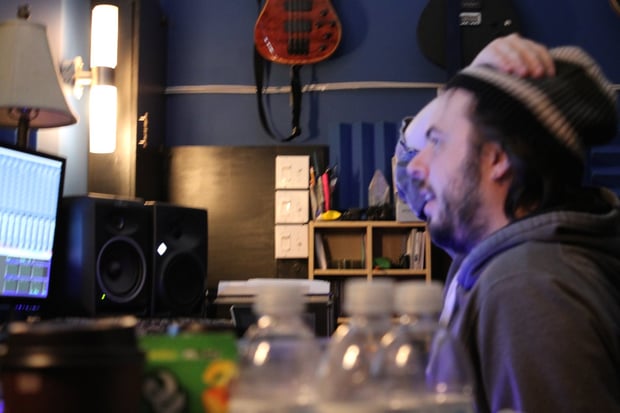 We're so lucky to live when we do. We can shoot music videos with our cell phones, sell our own music online and get royalties, and record great-sounding tracks on home computers. Sure, most of us would prefer to work in a lavish pro studio and sing into a $10,000 microphone, but all that stuff is far from necessary to make good music. All it takes is a good-sounding room, a good-sounding instrument or voice, and a keen ear for production. If you're wondering how to build a home recording studio, here are the five things you'll need to figure out first.

If you can possibly avoid it, don’t put your performance room in a basement or a garage. Sometimes this is too much to ask, but the acoustics of basements are iffy and garages are worse. Basements are filled with unwelcome noises, such as water through drainpipes and the firing of water heaters and oil boilers.

Garages lack insulation, so your neighbors will think a band is playing in their front yard. If you must use a basement, you’ll need a time to record when no one is home but the band, because turning off your boiler’s kill switch and banning flushing toilets during recording is easier than building a whole new soundproofed room down there.

The ideal recording studio setup would be two connected rooms in the living space of your home, having no contiguous walls with a bathroom or kitchen, and with some sort of “sound lock,” another space that creates a barrier between the studio and the rest of the occupied rooms. A stairwell or hallway fulfills this purpose well.

This way, other humans can live their lives two rooms away without getting their sneezes and cell phone ringtones on your recording, and your strumming and drumming won’t drive them crazy. To manage bleed, it’s useful if one of those rooms has a closet where you can mic up an amplifier.

[How to Build an Incredibly Effective Home Studio for Under $800]

2. Buy or borrow your gear

The items you need to get your home studio running? Microphones, cables and stands, a mixing board, and a computer (possibly also requiring an audio sound card to get the inputs into the computer).

They’re not sexy. They’re not exciting. They tend to get bought last, after some microphone preamp or Leslie rotating speaker simulator that you could really do without. Maybe that’s why so many home studios don’t have enough microphone stands or cables.

You should have enough long, good-quality cables to get from the farthest corner of the performance room to your recording device without stretching, for as many tracks as you’ll generally need at one time.

When it comes to mic stands, get more than you think you'll need. Remember the lone mic stand in your middle school auditorium, the one with the round metal foot that weighs 85 pounds and has been there since 1958? Well, today’s mic stands aren’t built like that, especially the boom stands. Your backing vocalist is liable to accidentally tear one of your mic stands apart like a silverback gorilla, and then you’ll be short a stand in the middle of a session.

Also, your stands should be weighted, especially if they’ll be holding a higher-end vocal mic. Those mics are heavy and tend to make cheesy boom stands topple over. Find a way to put some weight on those stands around the foldout legs so this won’t ever happen, even if somebody trips over a cord.

A good large-diaphragm condenser mic is an amazing tool for vocals and, in fact, almost everything. But you can make good recordings without one if the price is too steep. You can make amazing recordings with a bunch of Shure 57s and 58s, clean dynamic mics that cost around $100 each.

[9 Mics Under $500 That Sound Incredibly High-End]

Assuming you'll at least occasionally record a four-person group, you'll need a minimum of five microphones: three on the drums and one each on a guitar or bass cabinet. If you can make it happen, you will save an enormous amount of time and energy by having a dedicated studio drum set, one where the mics stay clamped on.

A couple of overhead condensers are terrific, but you can do great things with a couple of those Shure SM57s on the snare and hat, and a nice low-frequency microphone on that wandering kick drum.

Short on cash? This article shows you how to make a studio-quality low-end mic out of a speaker without buying any parts.

It's hard to advise musicians on how to pick the right recording platform. There are so many, and most of us end up going with whatever we’re accustomed to or can pick up cheap. When it comes to digital audio workstations (DAWs), the computer should be the cheapest component, because less-than-new computers have very little cash value.

Discover the system requirements of your DAW and find a used desktop machine that meets them. Skip laptops – they're plagued with charger and battery problems – but a good desktop model can sometimes run virtually forever.

And keep that computer disconnected from the internet! Your housemates or kids will play Minecraft on it and download viruses.

3. Tune your room with the simplest possible signal path

Before spending a bucket of money on rack effects, make sure you can great sound with the basic ingredients: instruments, mics, a mixing board, and a recorder.

Remember those three mics on your drum set? Add another low-end mic for your bass guitar cabinet, and another 57 on the guitar amp.

Stick your amps wherever they won’t bleed onto the drum track. Play with microphone placement and the position of your drum set and your amps. Keep experimenting until you find the sweet spots. When you can get great sound on a bone-dry recording of a three-piece rhythm section, using five very average mics, then you’ve located the heart of your home studio sound.

You can build from there, adding mics or attaching more drums to your drum set, but at least you’ve got the basic sounds. Of course, write all that stuff down: gain levels on your mixing board, the exact position of your mics and amps, and whatever else defines that great room tone. Since this is a home studio, you’ll most likely have to move things now and then when it turns into a spare bedroom for Aunt Eunice.

Since you’ve just written down the specifics of your best dry-room tone, stick that critical information in a three-ring binder or a notebook. That’s going to be your studio notebook, and it stays in the studio. You can use this to record critical track notes, any new discoveries about good tones or mic placement, and any other things you’d like to remember.

If your drummer breaks his hi-hat stand and needs to borrow the one from the studio, he should write it down so the rest of you don’t go crazy looking for it. If you have a notebook with pockets, use this to store your purchase receipts, directions, and warranty information for any gear you acquire.

Write the price, purchase date, and where you bought the stuff on those documents in magic marker, nice and big. Something is sure to go south with some crucial gadget, and it would be nice if the company paid for the repair. It also helps file insurance claims if someone "borrows" some of your gear in a criminal way.

5. Protect your gear from studio predators: drinks, dust, and feet

How does gear get destroyed? Human feet erode the insulation off of cables and break gear by tripping on cords. Dust settles inside equipment, dirtying potentiometers and making electronics overheat. And sweating beer bottles, cups of iced coffee, and 20-ounce sodas spill inside mixing boards and computer keyboards.

These three things are responsible for most poorly functioning or broken gear. Keep those cables secure, cover up your rig when you’re not using it, and ban beverages from dangerous spots. Then you can keep upgrading your home studio instead of spending your money replacing things your bandmates broke.