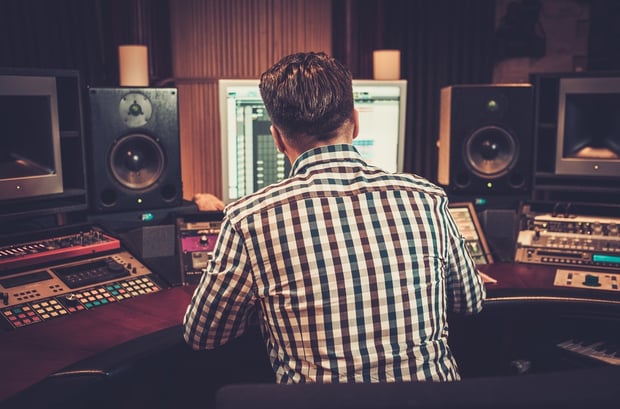 A version of this article originally appeared on Musichacker.

You’re an experienced musician who's been in the scene recording music and performing live. You’re proud of the music you’ve made, but the production quality is still lacking when you compare your songs to artists on the radio and TV. There’s a number of ways you can get your songs to that "next level," but one great way is to find a skilled music producer. You might not even have to look too far. This article will give you five places to start your search.

1. Talk to other local musicians

By far, one of the best resources available to you will be the other musicians in your scene. Ask them if they’ve worked with any local producers or know of someone who has. This will give you a good starting point and list of names to begin making inquiries.

If you don’t know any other local musicians, it’s time to network! Visit local shows and strike up conversations with the bands from your genre. Find local musicians online and listen to their music. If you like the production quality and sound, reach out to the band and ask who they worked with to produce and record the track. Check out Facebook groups in your area (an amazing resource) and mention you're looking for a good local producer. You’ll of course have to filter through the results and do your own homework to vet the suggestions you receive, but if anyone knows a good producer in your area, it’s other local musicians.

Search around and make a list of local recording studios. Call, email, or visit in person and ask for recommendations of producers that book time with the studio. Do a quick search of the studio name with the word "producer" tagged on to the end. This should quickly give you a list of quality producers, and as an added bonus, it'll provide an important filter for producers that are established and successful enough to work with local studios on a consistent basis. Finding a local producer through a studio can also ensure you’ll have access to a larger variety of equipment the producer may need to record your album.

There’s one thing all musicians and producers can agree is important: gear. Another good spot to look for a great local music producer is around the local music scene watering hole known as Guitar Center. Shaun Letang from Music Industry How To shares more:

"Music and instrument stores are often great environments for networking, because the owners tend to be well-connected in the music scene. Additionally, the staff are often part of bands and music projects of their own, and some stores have lesson programs, which means they also employ music teachers. Teachers are likely to be involved in the music industry in other ways, so they might know someone that can help you, or some of them might be producers in their own right."

4. Investigate bands that came before you and are now bigger than you

Know of a bigger band from your area? Maybe they started local but made it big a few years ago? Search Wikipedia and check their album credits to see who's listed as the producer. It doesn’t guarantee the producer will be local, but chances are good, especially if it’s an earlier album. It’s possible that the producer on the album is so huge now that you won’t be able to book time with them (if they’re interested in your project), but you might be surprised to know many producers who have worked with bigger bands are willing to work with lesser known groups if they’re local.

This method has the added bonus of aligning your sound with a band you admire or are trying to emulate. It’s a lot easier to tell a producer, "Hey I’m going for a sound similar to *insert band name* who you worked with a few years ago," than it is describing several influences the producer has probably never heard of.

Did you know there are such things as music producer networks? That’s right, someone already did the hard work for you and brought together a group of producers looking for new projects. You can search through a list of high-quality producers available to musicians all over the nation, and maybe even in your city. Check out NoiseCreators.com and SoundBetter.com to track down a producer in your city. A quick search online will reveal even more of these producer networks.

Note: Not all networks are created equal. Music producer networks can range from a highly curated, selective list of producers that have worked with big names, to nothing more than a fancy social media site. Searching for the names of a few producers from each network and finding a list of their discography will give you an idea of the quality of network you’re looking at.

For any local music producers you find, it’s important to know they’re a good fit for what you’re trying to accomplish. Find out their rates, their previous works, and listen carefully and take notes. Make sure you like the sound of that producer’s previous work; chances are your music will take on elements of that producer’s sound, so you want to know it’s a sound you enjoy. Make sure your personalities are a good fit by taking your producer to coffee and having an informal chat about the project.

Brett Baird, co-author of Musichacker.co and a local Seattle, WA, music producer for bands like Emery and Kings Kaleidoscope, reiterates the importance of networking when looking for a producer:

"Networking is one of the best ways you can find a quality local music producer. Anywhere you go there might be someone there. The other day I met a guy doing camera work, but he has a band and now we’re going to record in a few weeks. 'Always be networking' is pretty key for finding a producer and a musician’s career in general."

Dan Buckley is a music blogger formerly of the band Peace Mercutio. After a quick bout as a tour manager for the Van's Warped Tour, he settled down with his wife in the beautiful Pacific Northwest. He is passionate about helping independent musicians succeed online. Follow him at @peacemercdan.