Does Getting Your Music on a TV Show Really Result in New Fans? Q&A With Singer-Songwriter Patrick Joseph 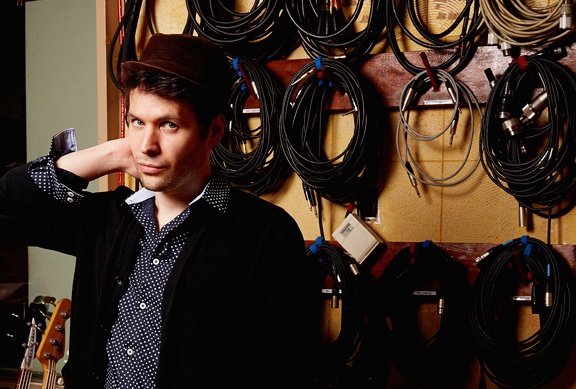 Have you ever been watching a TV show or movie and heard the most incredible song sync up with a scene perfectly? You just had to find out what song it was and who the artist behind it was. Nationally acclaimed singer-songwriter and recording artist Patrick Joseph has had fans reach out to him from all over the world from that very experience. And chances are that you, too, have heard his music while watching some of your favorite shows.

For Joseph, the process has been mostly about persistence and a bit of luck. He's had people find him randomly on the internet and sign his music, while at the same time he's been rejected over and over and over. We caught up with Joseph to learn how he's been able to get so many good sync deals, what he's gotten out of it, and what his personal "cheat sheet" for getting your music on TV looks like.

Your music has been featured on huge shows like Gossip Girl, The Office, Chicago Fire, and MTV's Friendzone. How did you first get your foot in the door?

I've worked with a handful of brilliant licensing agents and publishers over the past few years who really do their jobs well. One found me randomly on the internet and signed me. Another took some polite persistence on my part until we established a relationship and started working together. "Polite persistence" is a good term to keep in mind for any band or artist out there who's knocking on doors and trying to be heard. But sometimes, it's just about timing and luck, too. Your song has to be the exact right mood for a scene of a show or a movie, and the right ears have to happen to hear it and recognize that. But luck can only happen after you put in the work. Make sure you're always representing yourself well out there, and don't give up.

How long did it take you to get your music synced in some of these shows? Is it significantly easier for you now that you have a better resume?

The first syncs are always the toughest, because you're an unknown, and as an unknown there's no demand yet. The licensing world is difficult, because it's not always about the best music, but the right music. So you somewhat have to be lucky that you're just the right fit, and it doesn't necessarily mean you're better than the rest. Music is highly subjective, and there's not always a "better."

I think the first time I heard my music on TV was with MTV. The first one is always exciting, and then a few more come from that, and before you know it, you start spreading to other shows or movies. Breaking the ice definitely helps generate more demand for directors or music supervisors to hear your music in whatever they're creating.

It must be amazing to hear your music on television's biggest shows, but there certainly must have been some struggles along the way. What lessons have you learned from your first sync to now?

Having tough skin and dealing with rejection is a part of the process. Again, you can't take things too personally, and if you feel like you created some sort of masterpiece that the world is neglecting, you're either simply not trying hard enough to get it out there, or it's just not the right time or place for it yet.

My first song I heard used on television was probably around four years old at the time it got placed there. To this day, songs I wrote six to eight years ago are still finding their way into movies and TV shows, sometimes a track that I hadn't even thought about in a year. Get used to rejection and neglect. Embrace it, in fact. Once you get past that hurdle, you can just keep going without getting bruised. And that's a big advantage.

Having your music reach millions of viewers is a dream come true for most songwriters. But we’re curious: how many new fans have really come out of it for you personally? Is it a good way to make a living?

Each show and movie is different. Obviously, there are a lot of things that factor in. I had a song at the pivotal scene of a film where the two romantic characters were embracing and all that fluffy stuff, and of course being the theme song to some emotional moment on screen, people will connect with that and then go looking for you afterwards. My Twitter blew up after that particular one, and then my iTunes sales followed suit. And then there are those shows where your song is the song in a bar underneath some dialog, and nobody really even notices. Those ones just come and pass, and you just quietly enjoy some sync money up front, and then the royalties payments that follow.

On some of the MTV syncs, they feature the artist on screen after the show, which is nice, and that got a good amount of attention. Then there are cult shows, like Gossip Girl or The Office, where fans went looking for my song after the episode just because they like to know about and discuss on the internet everything that's going on with their favorite shows. It's nice when people care. As far as making a living and building a fanbase, I can say yes on both accounts, but of course you have to do other things too, such as tour and stay active.

Man, "TV ready" can be anything, really. That's kind of a depressing term, if you think about it. I guess that's a different thing than "radio-ready." Songwriters who are thinking in terms of radio, they think, "Okay, catchy chorus, 3:30 long, make it shiny." "TV ready" is really whatever the TV wants. Sad, happy, cinematic, lo-fi, indie, hip-hop, yodeling. If you really want to be a TV composer, you can get into the mindset of writing songs that have choruses with vague meanings that can be applicable to any TV or film situation on screen, accompanied by emotionally driven music. Lots of "ooos" and "ahhhs" and "heys." Music supervisors love that stuff and don't like specifics. "She broke my heart in Idaho and now my son and I have nowhere to go" is a really specific lyric that probably doesn't relate to too many characters in movies. But, "It just keeps gettin' better, day after day" can be used until its tape wears thin, and will probably fetch quite a few more phone calls. You can go down whichever path that makes you happy, honestly.

You can just be you, and make music that you feel is a reflection of your soul. Tell your stories and make the sounds that inspire you, and let the cards fall where they may. If someone wants to use one of your songs, by all means, let them. Or, you can be the songwriter with media in mind, and write the songs that you could envision in the pivotal TV or movie scene, and make some good money that way. There is no wrong way to go about it, really, you've just got to do what your heart tells you to do. I've done both. Sometimes what you expect to just be a mundane TV or film piece of music you were asked to write, you end up writing something you really love and make apart of your own catalog. Anything can happen, and that's why I think it's good to be open-minded. Even Radiohead writes things specifically for films from time to time, so why shouldn't you?

What are some of the most memorable opportunities that have come about as a result of your music being on TV?

TV presence has widened my audience quite a bit, as well as likely landing me some notable festival dates around the world. I can't say it contributes directly, but having those accomplishments under your belt helps you stand out a bit. And the best thing, of cours,e is just getting the emails, tweets, and messages from the new fans who hear your song in a show somewhere, from all around the world, too. That's the whole purpose of writing and recording music, is just to have an audience and share something with somebody else. Touring and performing is the same thing to me as having someone hear your song in their favorite TV show. You're performing for them without even knowing about it, and they wouldn't know about you otherwise if it weren't for that opportunity.

In addition to having your music on TV, you've played at festivals like NXNE, SXSW, and CMJ. Tell us how has Sonicbids been a tool for your music career.

Sonicbids is the official submission portal for a lot of the major festivals, including the ones you mentioned. So Sonicbids gets your music heard by the gatekeepers of some of the biggest festivals in the world, and that is a big help.

If you had a three-step cheat sheet for independent musicians looking to get their music licensed, what would it say?